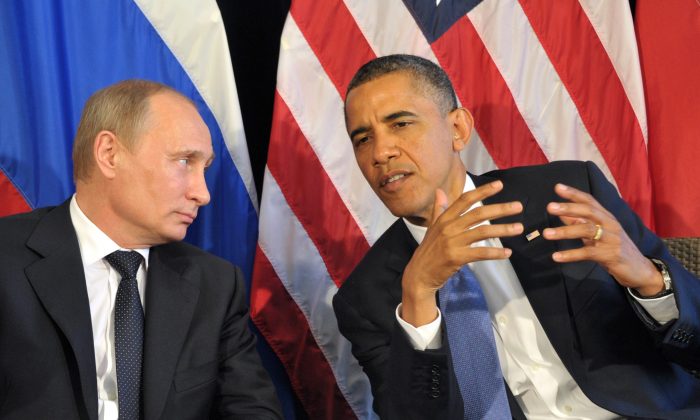 President Barack Obama (R) meets his Russian President Vladimir Putin (L) in Los Cabos, Mexico, on June 18, 2012, during the G20 leaders Summit to discuss differences over what to do about the bloody conflict in Syria. (Alexei Nikolsky/AFP/Getty Images)
International

Recent weeks have seen jolting reversals in the world’s attempt to bring an end to the war in Syria: the horrific attacks in Paris and Turkey’s shooting down of a Russian bomber that crossed into its airspace threatening joint action against the Islamic State (ISIS).

François Hollande’s shuttle diplomacy to Washington and Moscow underlined the fact the international community is more focused on Syria today than at any point since the U.N.-brokered deal to remove Syria’s chemical weapons in 2012.

Yet a substantive diplomatic deal among the major players, the type of deal that would bring peace to Syria, looks far more difficult, as each has contradictory security and political priorities that complicate the fight against ISIS.

The war is driven by multiple, interlocking layers of conflict. There are disputes among different clusters of Syrian fighters as Sunni rebel groups in northwestern and southwestern Syria fight government forces and fend off attacks from ISIS. At the same time, there is a regional dimension, especially a region-wide conflict between Shiite Iran and Sunni powers such as Saudi Arabia, Qatar, and the United Arab Emirates.

Turkey, too, maintains it has critical security interests in Syria, above all in prioritizing that Syria’s Kurdish minority does not achieve an independent state, which would exacerbate the Turkish government’s dispute with its own Kurdish minority.

Finally, outside powers such as the United States, France, and Russia clash over the role that Bashar al-Assad’s government should play in Syria’s future and the fight against ISIS.

The terrorist attacks in Paris led many to expect that France would drop its longstanding demand that Assad must leave office and would devote all its attention to fighting ISIS, perhaps even with the support of Assad’s forces.

In such a scenario, many assumed, the West would have no choice but to come to terms with Russia. The Kremlin says it wants to fight terrorism, but has primarily focused its airstrikes, not on ISIS targets, but against the rebel groups around the northern Syrian city of Aleppo that are fighting Assad.

Two recent events have made a ‘grand bargain’ about Syria between Russia and the West less likely.

Two recent events have made a “grand bargain” about Syria between Russia and the West less likely. First, Hollande’s week of diplomatic shuttle to Moscow and Washington underscored the vast gap that remains between how the West and Russia see Syria—and how two years of war in Ukraine have eroded Western trust in Russia.

Even intelligence sharing between Russia and Western powers about ISIS is a complicated task because of fears about revealing sources.

Second, Turkey’s shooting down of the Russian bomber has underscored the risk involved in military operations in Syria and the danger of miscalculations.

Why did Turkey shoot down the Russian plane? Russian aircraft have violated Turkish airspace several times since Russian bombing raids began in October, at one time for more than two minutes, which Turkish and NATO officials interpret as a deliberate provocation.

Turkish officials—who dislike Russia’s intervention in Syria, and who, unlike the Kremlin, want to see Assad’s fall—may have been looking to send a signal to Moscow about Turkey’s resolve. At the same time, Turkey’s action brings NATO more directly into the conflict over Syria.

The United States, France, the United Kingdom, and other Western countries that are NATO members pledged to defend Turkey against attack, and the Russian plane’s violation of the NATO member Turkey’s airspace brings Western disagreements with Russia back to the forefront of debate.

Some analysts predicted that the West would seek to ‘trade’ Ukraine for Syria for Russian support in anti-ISIS operations.

The other major Western disagreement with Russia is Ukraine. Some analysts have predicted that Western countries would seek to “trade” Ukraine for Syria, giving the Kremlin some of what it wants in Ukraine in exchange for Russian support for anti-ISIS operations in Syria. Though some Western analysts and officials have considered the idea of cutting a deal with Russia, there is little sign of such a trade emerging in practice.

The coalition in favor of keeping tough sanctions on Russia—including the United States, U.K., Germany, Poland, and the Baltics—remains committed to that policy. Germany, a key player in Europe’s foreign policy, remains unconvinced that more airstrikes in Syria constitute a wise policy. Berlin, therefore, sees little reason to cut a deal with Russia.

Meanwhile, renewed violence in Ukraine’s war-torn Donbas region has underscored the extent to which Western and Russian disagreements about Ukraine remain.

Russia, for its part, would likely be pleased to strike a deal with the West about fighting ISIS. That would give Russia a powerful seat at the negotiating table that will decide Syria’s fate, bringing Vladimir Putin back into the fold. Such a deal would also likely preserve Russia’s naval base on the Mediterranean and other military installations in Syria.

Turkey, however, has thwarted Russian hopes for a rapid deal with the West over Syria. Turkey has a complicated relationship with its southern neighbor. President Recep Tayyip Erdogan once had a close relationship with Assad, and the two governments even had joint cabinet meetings. After Assad responded to Sunni protests with a violent crackdown, relations rapidly soured, and Turkey’s government began supporting anti-government rebels.

Today, Turkey has several goals in Syria. Most importantly, it seeks to avoid the establishment of an independent or autonomous territory in the northern-Syria region that is dominated by Kurdish groups. Especially because Turkey’s relations with its own Kurds have soured since this summer, Ankara fears that an independent Kurdish region in Syria would further embolden Kurdish groups in Turkey.

A deal directing the West’s focus solely toward ISIS, with the effect of re-establishing the legitimacy of Assad’s government, would contradict Ankara’s goals. First, a deal between Assad and the Aleppo-based rebels might lead to a decentralization of Syria’s government in a way that provided further autonomy to the Kurds. Second, Turkey fears the expansion of Russian and Iranian influence in Syria.

There may be some scope for an agreement between Russia and the West about Syria and Assad’s role.

There may be some scope for an agreement between Russia and the West about Syria. Hollande and French Foreign Minister Laurent Fabius have signaled that they are willing to compromise on their opposition to Assad, suggesting that they could back a process that led to a “credible political transition”—wording that suggests that Assad could stay in the short term before being replaced by a more representative government in the medium term.

Russia, too, has repeatedly stated that its commitment is to Syria’s “legitimate government” rather than to Assad personally, which appears to encompass a similar possibility of a medium-term exit for Assad.

An anti-ISIS coalition between Russia and the West would be more effective if fully supported by Saudi Arabia and Iran, two countries that have invested heavily in Syria. That looks unlikely. But even if such a deal is struck—and even, less likely, if such a deal includes most of the anti-Assad rebel groups clustered around the northern city of Aleppo—that would not stop the fighting in Syria.

Nor would such a deal lead to immediate destruction of ISIS in Syria. ISIS forces are spread between Iraq and Syria. Rooting them out of their heartland in the river valleys that connect the two countries will take a more concerted military effort, combining air and ground assault, than any foreign powers have thus far been willing to commit. Deal or no deal, the ravages of war in Syria are unlikely to end soon.

Chris Miller is associate director of the Grand Strategy Program at Yale and a fellow at the Foreign Policy Research Institute. Copyright © 2015 YaleGlobal and the MacMillan Center. This article was previously published on Yaleglobal.yale.edu