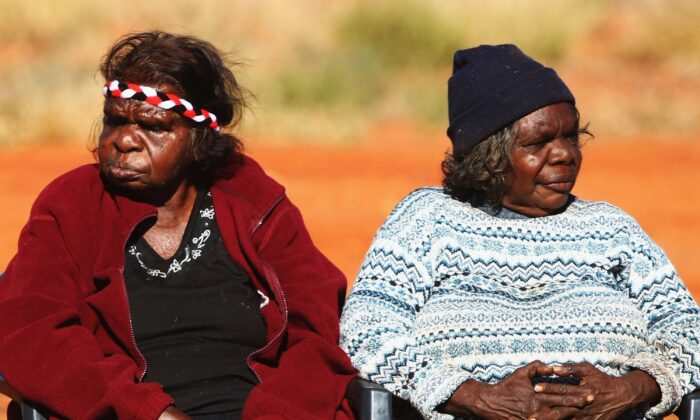 Aboriginal women gather to meet Indigenous Affairs Minister Mal Brough as he arrives for a meeting with the Mutitjulu community in Mutitjulu, near Alice Springs, Australia, on July 6, 2007. (Ian Waldie/Getty Images)
Viewpoints

A Voice for Whom?

The new Australian Prime Minister, Anthony Albanese, commenced his election victory speech by declaring: “On behalf of the Australian Labor Party, I commit to the Uluru Statement from the Heart in full.” This would involve a “First Nations Voice” entrenched in the Australian Constitution, consisting of a standing body to advice federal Parliament on laws that affect not just the Aboriginal community but, potentially, the nation as a whole.

In July 2021, the Australian government released its final report on the Indigenous Co-design Process (pdf). This report proposes a consultative body offering advice to the government before a bill is introduced, as well as after a bill goes through its final phase of approval in Parliament.

Called the “Voice,” this body of consultation would consist of 24 members of the Aboriginal community, including five members from remote regions.

Due to problems about confirming Aboriginality, entitlement to vote, and risk of low voter turnout, no member of this body would be elected.

“Sadly,” writes Dallas Scott, an Indigenous writer, “this is the enduring legacy of Aboriginal affairs in Australia.”

According to him, the push for such an unelected body serves a highly educated, mostly urban elitist voice with titles such as “professor” and “doctor,” demanding far-reaching changes for the Aboriginal community.

As an Indigenous person, Scott is especially critical of individuals who identify themselves as being “Aborigine” but, in his view, “don’t have any idea about what it’s like to be black.”

“Those given titles such as ‘elder,’ ‘spokesperson,’ ‘tribal leader’ (or some other colourful variations) are those not elected by the people they claim to represent, but overwhelmingly, are self-appointed to such a role. In a society where citizens have been sent to die for the chance to bring democracy to another country, some turn a blind eye to the undemocratic state of native organisations. Australians have happily swallowed the lie that Aborigines are one big, multi-coloured family who stick together.”

The great hypocrisy in all of this is that the very paternalistic behaviour of the past that the present establishment so self-righteously decry, they now wish to constitutionalise and impose on the least fortunate, least educated, and most isolated members of our society.

Changing the Australian Constitution in order to add this unelected body to act on behalf of the Aboriginal community would add an irrefutably paternalistic element to the nation’s legal-institutional framework.

Fred Chaney and Bill Gray, the former Minister of Aboriginal Affairs and the founding chief executive of the Aboriginal and Torres Strait Islander Commission, respectively argue this would ensure an Indigenous voice on policy and issues that pertain directly to them.

“By embedding an obligation within the Constitution, Australia would be ensuring a lasting and enforceable obligation upon the parliament to have an Indigenous representative mechanism in place by which First Australians can have their voice heard on legislative and policy issues that impact directly on their interests,” they write.

This amendment to the Constitution would create different rules for different people. However, one of the great virtues of the Australian Constitution is the equal treatment of all citizens regardless of race, culture or origin. The function of our Constitution is not to report on our history but to distribute powers between federal and state governments.

So why is there such a great push for this form of constitutional recognition? In “The Break-up of Australia: The Real Agenda Behind Aboriginal Recognition,” Keith Windschuttle gives his own personal opinion on the subject. According to this Australian writer, historian, and former board member of the Australian Broadcasting Corporation, many people today are motivated to rewrite the Australian Constitution for that once-in-a-lifetime opportunity to make a change and fulfil their political ambitions.

“Their ambitions are not centred on gaining more liberal reforms or making Australia more democratic. In fact, in order to fulfil their political agendas, most constitutional critics today regard democracy, not as an objective they must pursue, but as an obstacle, they must overcome. For them, it is democracy that is the problem because it gives the majority of ordinary Australians the last word in deciding who governs. In the eyes of those who now dominate our cultural institutions and much of our political leadership, most ordinary Australians are uneducated, uncouth, racist rednecks and a Constitution that gives people like them such power is unbearably frustrating.”

On Oct. 6, 1999, the political establishment required us to decide on whether a new preamble should be added to the federal Constitution, which contained a recognition of Aborigines and Torres Strait Islanders as the nation’s first people. However, only 39 percent voted “yes.”

To make sure this won’t happen again, the government is now committed to spending millions on an “education campaign” to convince “ordinary Australians” that recognition carries with it “a moral imperative” and that another failed referendum simply “cannot be contemplated” (pdf).

We Are All Australian

Of course, Aboriginal culture is already comprehensively recognised by Australian law. There are numerous federal and state laws ensuring that Aboriginal culture is not just acknowledged but is effectively celebrated. However, there should be no special treatment of citizens based on origin or ancestry. Otherwise, what would happen to those families where a parent could have more rights over their children than the other parent only because of their ancestry?

Instead of creating reconciliation, the fear is that the grant of constitutional privileges could drive us further apart than we have been for generations.

As noted by Ian Callinan QC, a former Australian High Court justice, “any constitutional provision which might seek to justify a different law for peoples of different ethnicity on the grounds of that ethnicity, should be resisted. This must be so for reasons of fairness and social cohesion, as well as clarity of application.”

To conclude, the drafters of our Constitution intended that every citizen in this country should be treated equally before the law. However, the creation of the Voice in our parliament would involve the granting of special privileges to self-appointed “leaders” of the Aboriginal community on the sole grounds of their apparent ancestry. Surely, one might say, “we are all created equal and endowed with certain inalienable rights” is a much better principle of constitutional law than “we got here first!”