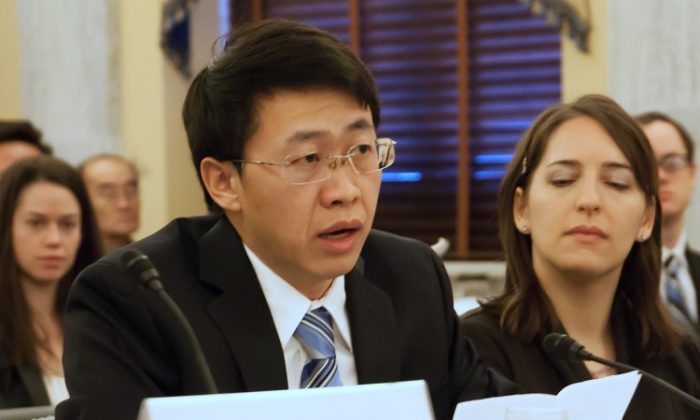 Hu Zhiming, a former officer in the Chinese Air Force, gives testimony to congressional Representatives on Dec. 18. Hu lost everything and spent over eight years in prison because of the Chinese Communist Party's persecution of Falun Gong and Hu's refusal to renounce his faith. (Lisa Fan/The Epoch Times)
China

A Chinese Regime Persecution Running Out of Steam

Hu Zhiming had a good life as an officer in the Chinese air force, but his choice to follow his conscience led to over 8 years in prisons and detention centers, with torture driving him to near insanity, emaciation, and to within a hair’s breadth of death.

Due to his technical expertise, Hu was instrumental in setting up secure lines of communication between Falun Gong practitioners in China and the overseas Falun Gong website Minghui.org. These activities also led to his being abducted from a Shanghai hotel room in the early hours of the morning on Oct. 4, 2000. From then until 2009 he was in and out of jail and detention—though mostly in.

But Hu’s story is representative of both the persecution of Falun Gong, the resilience of adherents in the face of it, and the visible exhaustion of the authorities in continuing the campaign, as explored in a hearing by the Congressional-Executive Commission on China (CECC) on Dec. 18.

For example, in 2000, before Hu Zhiming was in jail, there was little Falun Gong activity in his hometown in Liaoning Province; in 2004, during a brief sojourn from prison, he saw posters about the practice, but they were quickly torn down; by 2009, however, before he fled China, Hu saw “copious posters, signs, flyers, and informational DVDs.” And not only that, but the posters “had been there for a long time, with ink faded from the sun and [the] paper crisp from dried rain.”

Falun Gong practitioners had persisted over a decade since former Chinese Communist Party head Jiang Zemin had launched the campaign against the traditional spiritual practice in 1999. That campaign was running out of steam. Three years on, that trend has continued.

This much and more was explored during the CECC’s hearing titled “Falun Gong in China: Review and Update,” consisting of two panels, the first made up primarily of victims, and the second primarily of researchers of the Communist Party’s campaign.

Representative Chris Smith (R-NJ), Chairman of the CECC, opened the discussion by describing the campaign as “severe, brutal, ugly, and vicious.”

Co-chairman of the CECC Senator Sherrod Brown (D-OH) described the persecution as “One of the harshest campaigns against a group of believers in modern times.”

The testimony of Bruce Chung, a Taiwanese Falun Gong practitioner, was also given. Chung was detained in China during a family trip in June of this year and accused of sending from Taiwan equipment that could have been used to insert Falun Gong documentary materials into television broadcasts.

A key question for researchers of the persecution of Falun Gong, and a stated goal for the CECC hearing, is to understand the current status of the campaign in China today, the importance to which the Chinese Communist Party accords it, and the circumstances of adherents in China.

One panelist took a different view from the other three.

James Tong, a professor of comparative politics at the University of California, Los Angeles, believes that the reports made to the National People’s Congress by the People’s Republic of China chief prosecutor, among other publicly available sources, indicate that the campaign against Falun Gong is no longer a “law enforcement priority” for the Chinese leadership.

Tong also pointed to the virtual cessation of anti-Falun Gong propaganda in the Chinese state-run press, which had been inundated with it after the campaign got underway in 1999.

Notably, 2002 was the year of the 16th Party Congress, when the baton of leadership was passed from Jiang Zemin, for whom the persecution of Falun Gong was a personal crusade, to Hu Jintao, the more guarded new Party chief who has never publicly associated himself with the brutal campaign.

The end to high-profile, national-level propaganda, and Falun Gong’s absence from the state law enforcement agenda, were not an end to the campaign, however, according to other experts. An examination of the details on the ground, and of the interactions between the various political bodies in China that are involved in the persecution, reveals a much more complex picture.

“This is a political campaign led by the Party,” said Xia Yiyang, Senior Director of Research and Policy at the Human Rights Law Foundation in Washington, D.C. “The 610 Office is run by the Party, not the state,” he continued, referring to the agency set up by the CCP to persecute Falun Gong. He said the persecution is “a Party action that used state organs as the instrument.”

Charles Lee, a Chinese-American who survived three years of persecution in prison, added that removing Falun Gong from the spotlight, while continuing the campaign all the same, was “another strategy” because the campaign had caused international attention on China’s human rights abuses. So after Hu Jintao took power, the Party began to downplay the persecution in public, rather than cease it, Lee argued.

“It’s about willingness and ability,” she said. “They describe it as a life and death struggle in documents from the central 610 Office … but at the local level, many of the security officers—not that there aren’t a good number of sadistic policemen—sympathize with Falun Gong.”

She added that, “People are increasingly sick of this, and even the cadres charged with this transformation work are having a hard time being convinced of the necessity to continue the persecution of Falun Gong.”

Push back from society includes often intense resistance from friends, neighbors, co-workers, and well-wishers of Falun Gong practitioners, who in recent years have rallied together, often at the risk of reprisal, to collect signatures against the persecution of friends or relatives, and have stood up in an unprecedented fashion to the iron fist of the Chinese Communist Party.

“The official communist party literature reveals, perhaps unwittingly, that the 13-year-old campaign to defeat Falun Gong has failed,” Ford said in prepared remarks. “Local cadres suffer lethargy and ‘paralysis of thought’ in pursuing the campaign,” she said, while “more and more people are returning to or taking up the practice of Falun Gong.”

She concluded that, “despite all its efforts, the Communist Party is losing the battle for the hearts and minds of the Chinese people.”