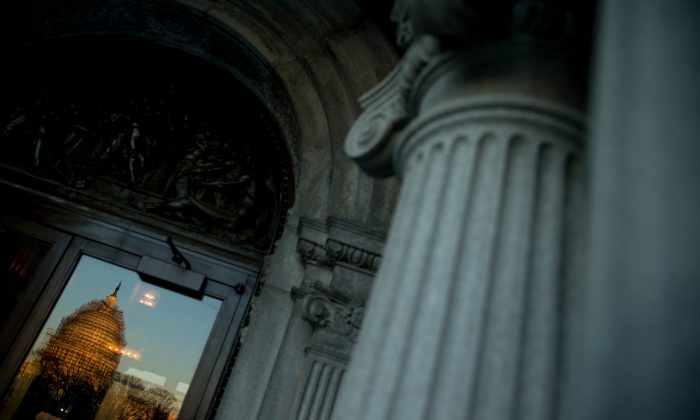 The Capitol Dome seen in reflection from a door to the Library of Congress at sunrise in Washington, D.C., on Dec. 19, 2015. (AP Photo/Andrew Harnik)
Opinion

You know who I feel sorry for? Today’s politicians.

You’ll laugh at this, but hear me out. This is a very tough time to be a politician—whether running for office or trying to lead while holding office. The women and men who’ve undertaken to represent us face circumstances that make campaigning and governing unusually challenging right now.

Not that they’ve ever been easy, at least in my lifetime. Our size, diversity, and multi-layered government structure; the number and complexity of the problems our political leaders face daily; and the divided politics of our time, which make settling on coherent policies especially challenging—all these combine to make being a politician in a representative democracy one of the most demanding jobs around.

Several features of the current political landscape, however, give politics a sharper edge and make it far more difficult to navigate.

The extent to which politicians today genuinely distrust the other side is something new in our politics. It makes progress on the issues of the day extremely complicated.

For starters, our political discourse, from city councils to state legislatures to Congress, is less forgiving than it was a generation ago. Political opponents are no longer just people with whom we happen to disagree—they’re people who need to be shamed into silence. They can’t be trusted, they can’t be negotiated with, they’re self-serving and unpatriotic, and when they’re not incompetent, they’re scheming, ill-informed, and ill-intentioned.

This rhetoric is not just calculated demonization. The extent to which politicians today genuinely distrust the other side is something new in our politics. It makes progress on the issues of the day extremely complicated.

This is exacerbated by politicians’ awareness that voters have lost confidence in our traditional political leadership and are searching hard for alternatives. You see this in the rise of candidates like Donald Trump on the right and Bernie Sanders on the left, who speak to voters who are looking for someone to express their anger and frustration.

Why are Americans upset and more willing than usual to rally to outlying candidates? I don’t think there’s any great mystery. For starters, we have a society that is deeply concerned about economic insecurity.

As the Pew Research Center reported recently, the American middle class—for decades the stable anchor of economy and society—is in trouble and no longer in the majority. People are moving up, but most are not, and some are moving down. Small wonder that immigration causes so much concern.

You can add to this the fear of terrorism and a deeply unsettled view of the major changes taking place in American society: the rise of big data and its attendant loss of privacy; the migration flows that whittle away at some communities while causing others to change unrecognizably from month to month; the tensions that diversity, arguments over gender, and racial conflict all produce; the fluid and ever-changing patterns of religious belief and identity that have shaken many communities loose from the institutions that once moored them; the decline of the traditional, objective media.

America today is an uneasy place, and we see this reflected in voters’ frustration and pessimism.

With next year’s elections still almost a year away, voters are mostly just looking around. They like candidates who express their anger and resentment, but that’s in part because they’re not measuring candidates by whether they seem fit for the presidency or Congress or the governor’s mansion. Voters are just now starting to hold candidates up to the standards of the offices they seek. As they do, the unsettled political environment in which we find ourselves will grow a bit less uncertain.

But the long-term issues—the fears and uncertainty and the forces driving them—won’t have gone away. Which is why I feel great sympathy for politicians at the moment. The skills we need in our political leaders, like the ability to approach those with whom they disagree with a measure of goodwill and an openness to negotiation and compromise, are not held in high esteem by the voters or by the loudest voices in their own parties.

It’s easy for a politician to pander to anger and frustration. It’s much harder to face a roomful of disparate opinions and forge a consensus behind a solution. Yet that is precisely what many politicians recognize our country needs.