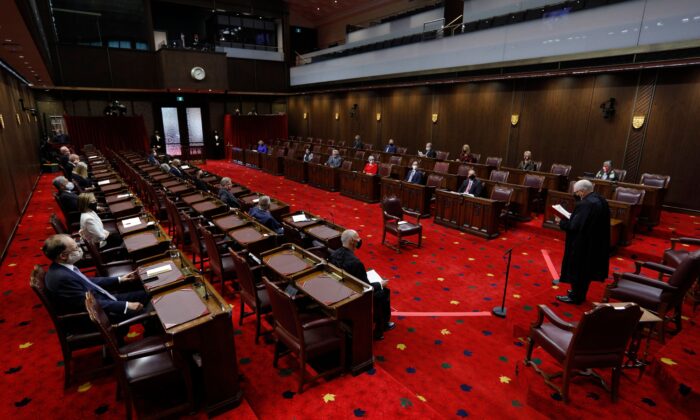 Senators listen to speaker George Furey in the Senate chamber in Ottawa on Sept. 23, 2020. Bill C-10, which passed in the House of Commons on June 22, must now pass in the Senate before it can become law. (Blair Gable/Pool/AFP via Getty Images)
By Lee Harding

Controversial internet regulation Bill C-10 has passed in the House of Commons, but it still has to win passage through the Senate before a predicted soon-to-be-called election would effectively kill it.

The bill places under the Broadcast Act audio and audiovisual content delivered over the internet by digital platforms, a move that some fear may lead to everyday Canadians getting censored for social media postings. However, the bill’s main aim is to impose Canadian content and production requirements on streaming services and social media platforms, such as Netflix, Amazon Prime Video, and YouTube, just as it has been doing for traditional broadcasters.

Dennis Dawson, a former Liberal MP who is a member of the Progressive Senate Group, sponsored the bill in the Senate and still stands behind it.

“Basically, there are hundreds of millions of dollars that are leeching from the system where Canadian artists, were they to be covered on traditional broadcasting systems, would be getting their share of the revenues under the existing Broadcasting Act that was written … before they had internet,” Dawson told The Epoch Times.

“The politicization of the bill in the House of Commons … became a debate on free speech, and it was totally a distortion of the real reasons for the bill. The government did not put in a bill because they wanted to stop people from putting their cat videos on the internet.”

“The Liberals are moving to radically change how Canadians use the internet right when the internet is the most important thing that we have. There’s nothing that we are more dependent on. I really value freedoms, freedom of expression, freedom of speech, and in my opinion, C-10 leaves the door open for massive abuse of power on the rights of Canadians,” Plett said in an interview.

“I actually use the freedom of opinion very strongly because we have a prime minister and a cabinet who doesn’t even believe that if we vary from theirs that we should even have an opinion, let alone express it publicly. You have [gone] almost to the point where we have thought police out there to work with the whole cancel culture.”

The same day the House passed C-10, the government gave formal notice that Justice Minister David Lametti will soon introduce legislation to amend the Criminal Code and the Canadian Human Rights Act regarding “hate propaganda, hate crimes, and hate speech.” Plett fears the government is “opening the door to throwing half of Canada into jail.”

In April, the Liberal-dominated Heritage Committee removed a clause from the bill that had exempted user-generated online content, such as videos posted by individuals on social media platforms.

Many other amendments were introduced in the spring, but some never got to be debated. On June 7, with the support of the Bloc Québécois, the Heritage Committee passed a motion to limit debate at committee to just five more hours. And then on June 10, the committee overruled its own chair and proceeded to allow dozens of amendments to be voted on without any discussion or debate and without their contents having been disclosed to the public. The committee continued to vote after the debate time expired.

In the end, on June 15 House Speaker Anthony Rota declared dozens of amendments “null and void,” ruled that the committee overstepped its authority, and ordered a reprint of the bill without those amendments.

Undaunted, the Liberals reintroduced its amendments as the House began its final week on June 21. Conservative MP Alain Rayes, for his part, moved to reintroduce the protections the Heritage Committee had removed for those posting on social media, but he was voted down. Liberals argue that there are enough safeguards in the proposed legislation to ensure people’s rights aren’t infringed upon, a claim the Conservatives reject. Bill C-10 passed third reading on June 22 around 1:30 a.m. following a 14-hour session.

Plett said the “brazen” approach has no precedent he could think of.

“The Speaker [Rota, a Liberal] has come up with very strong rules against his own government. And how do you do that at the 11th hour? You all of a sudden slap in [many] amendments, and expect that everybody will just say, ‘Yeah, OK, fine. Let’s pass that.’ It just doesn’t work that way,” he said.

Dawson, who is part of a 12-member group of progressives in the Senate, acknowledges that senators “have to clean up what is a very messy situation because these amendments, as you know, some of them were debated, some of them weren’t debated. They were voted on; they were divided on. That’s why we have a Senate. That’s why we have a chamber of sober second thought.”

‘We Should Not Defeat Government Legislation’

The Senate rarely overrules the House of Commons. Yet, David E. Smith, professor emeritus of political studies at the University of Saskatchewan, said Canada’s founders clearly thought the Senate should use their powers in some circumstances or they never would have been granted.

“The Fathers of Confederation presumably thought there was a possibility that there was, and that they had to. And I think, particularly in the 19th century, particularly regional concerns, [senators] made sure that they were properly considered,” Smith said in an interview.

“The argument against the Senate has been, of course, that it’s not elected, and therefore they’re overturning the decision of the people’s representative. … And that [point], obviously, is a powerful one, but that doesn’t seem to me to end the discussion.”

Plett says senators should respect the wishes of the House.

“I do believe inherently that because we are appointed, we should not defeat government legislation,” he said, but adds that for C-10, he also believes “absolutely fervently that it is our job to amend that legislation.”

Regardless of what amendments the Senate might propose after a thorough study of the bill, Plett doesn’t expect a long back-and-forth process between Parliament’s upper house and lower house.

“Many senators also believe … we should take one stab at amending, send it back to the House. If the House refuses our amendments, then we roll up the carpet and say, ‘OK, it’s your job, and you will possibly suffer for it in the election, but we aren’t going to force our will on the democratically elected House.’”

There have been rare instances where the Senate has rejected House bills in the past, such as when it killed proposed legislation in 1996 that would have limited liability for a privatized Pearson International Airport. Plett says a sequel for C-10 is doubtful, but possible.

“I don’t think we would have the support to kill Bill C-10, … but I have a feeling this bill might have been the exception to that, as the bill on the Toronto airport was an anomaly.”