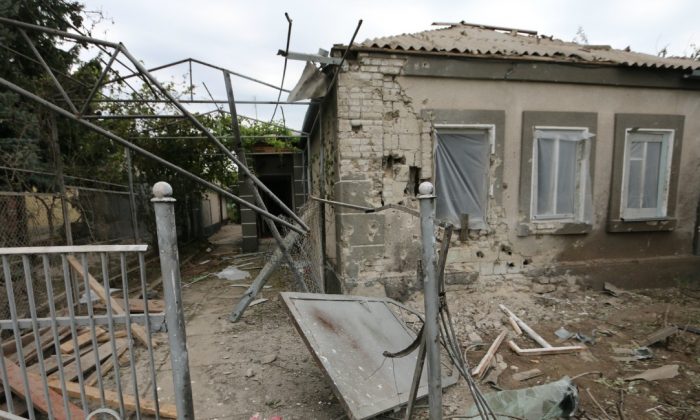 Machsma is the mayor of Sartana, Ukraine, and he is leading the town’s approximately 10,000 residents through their own darkest hour.

On Sunday night (Oct. 16), starting around 10 p.m., combined Russian-separatist forces shelled Sartana with 122-mm and 152-mm artillery for about 25 minutes. The attack killed three, injured six, and damaged 170 homes. It was the fifth time combined Russian-separatist weapons have struck Sartana, including a Grad rocket attack on Oct. 4, 2014, that hit a funeral procession and killed seven.

After Sunday’s shelling, Machsma said he went to the local library and checked out the book on Churchill.

“I want to use the experiences of great people for inspiration,” he said. “We cannot just learn from our mistakes.”

Nina Konstantinovna, 87, was in the kitchen when the artillery began. A shell hit one meter from the wall of her home, collapsing a corner on the side facing adjacent Krasnoarmeyskaya Street and spraying shrapnel in her living room.

“If I had been in my bed, I would have died,” she said, speaking three days later, standing with a cane in one hand.

Although broken glass from a window shattered by the explosion wounded her, Konstantinovna credits a table covered in orthodox icons and a framed picture of her late husband (he died eight years ago) with the good luck that led to her survival.

“There’s no other explanation,” she said.

After the explosion, neighbors rushed over to pull Konstantinovna out of her smoke-filled home. She recalled sitting on a bench under the grapevine-covered trellis of her garden, waiting for the smoke to clear, unsure whether more artillery was coming.

“It wasn’t this bad when the Germans attacked,” she added, referring to the invasion by Nazi Germany in 1941. “I never saw shelling like this.”

Konstantinovna was too young to remember much of the Holodomor—Stalin’s government-organized mass famine from 1932 to 1933, which killed millions—but she remembers World War II clearly. When the Wehrmacht retreated in 1945, she covered her arms in chemicals to give her a rash so that she would be medically disqualified from being taken to forced labor camps in Germany.

“We were young and we weren’t so scared,” she said. “The Germans destroyed a lot of things, but we were safe from it.”

Konstantinovna has been living in her home since 1958, and even though the damage is extensive, she doesn’t want to leave.

“I want to live the rest of my life in this house,” she said.

Sartana is an ethnic Greek enclave, and Konstantinovna is of Greek heritage. The local Greek society as well as the Ukrainian government is raising money to repair her home, she said, explaining that without the help, she would have to move.

Konstantinovna’s son-in-law, Vasiliy Koktash, 62, also lives in Sartana. He is a factory worker at the nearby Azovmash manufacturing plant and a former sergeant in the Red Army. He worked on ballistic missiles.

“I’m not scared or angry,” Koktash said. “I just want to focus on rebuilding and moving on.”

“But no one in my family died,” he added. “If they did, I’d feel differently.”

On Wednesday, the third day after the attack, life had returned to normal in Sartana. It is a typical Ukrainian suburban town, comprising both factory workers and farmers, located about 10 kilometers (6.2 miles) from Mariupol’s city center. Brick homes painted in bright colors with vertical windows and pitched corrugated metal roofs line the dirt and gravel streets. The smokestacks of the nearby Ilyich Iron and Steel Works plant, endlessly churning out acrid smoke, distort the horizon.

On Sartana’s streets, children and the elderly alike are out walking and riding bikes as young men in track suits stroll by talking on cell phones. People are waiting at bus stops. At the main intersection downtown, babushkas sell watermelons and potatoes.

“There was no panic, but people are afraid,” Machsma said, describing the mood after Sunday’s attack. “Nobody can tell if it will happen again.”

“For me, I’m used to it,” Koktash said, speaking about the threat of rockets and artillery. “I’m so used to it that I didn’t worry. I didn’t even go to the basement.”

Machsma said there is no early warning system in place in Sartana (nor is there one in nearby Mariupol), which would trigger an air raid siren that could give residents a few valuable seconds to get to a shelter or off the streets during an attack like Sunday’s.

Two of the fatalities in Sunday’s attack were people caught on the street in the open with no warning to take cover from shrapnel.

“Our early warning system is when the power goes out,” Machsma said, referring to when artillery cuts through power lines, shutting off electricity.

There is also no organized effort to teach civilians how to react during a bombardment. But after more than a year of war, with the fighting often only a few kilometers away, most citizens are now well-versed in how to react. Even so, the stress of a life-or-death situation is one with which many civilians struggle.

“I don’t understand at all what they were aiming at,” Machsma said.

Ukrainian military officials say that Sunday’s attack was the latest in a pattern meant to instill fear in the population of Mariupol and surrounding villages. There is a mounting sense of frustration in the area toward the government in Kyiv and its prosecution of the war, many residents admit. And by sporadically attacking civilian areas, some say, the combined Russian-separatist forces are looking to destabilize the region politically and create panic.

In the aftermath of the attack, a government-appointed psychologist visited Konstantinovna to evaluate her for post-traumatic stress.

“I don’t think it was the last bomb and I don’t know what will happen the next day,” she added. “That’s why I’m scared.”