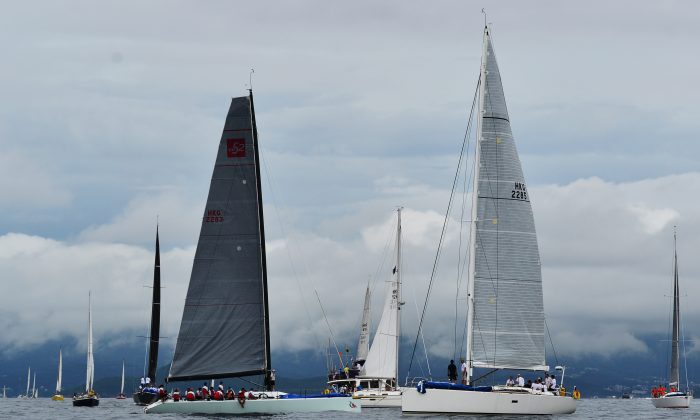 Boats cruising around the Committee Boat waiting for the start of Race-2 of the Hebe Haven Quest Yachting Typhoon Series on Sunday June 22, 2014. After waiting for more than 2-hours, lack of wind forced the proceedings to be abandoned. (Bill Cox/Epoch Times)
Asia & Pacific

HONG KONG—Sunday June 22 started off as a typical Typhoon Series day with boat teams arriving at the Hebe Haven Club from early in the morning, making final preparations, getting the well needed energy from a buffet breakfast or grabbing a sandwich and coffee between the finalizing activities.

The committee boat team attended a pre-race meeting on board the committee boat “Fraser Doig” at 9.30am. Rob Allen (Sailing Centre Manager) introduced the event, the team and outlined the program of the day. Race Officer of the day, Inge Strompf-Jepsen started by checking the number of boats entered, the number of Classes and the number of starts required. Start–1 IRC-A and –B, Start-2 IRC-C and Sports Boats, Start-3 IRC-D and Start-4 HKPN boats.

Strompf-Jepsen did a quick recap of the Sailing Instructions and explained that rather than an Island Race, Races-2 and -3 are raced over geometric courses starting within or outside Shelter Cove depending upon prevailing conditions.

Race Officer explained possible alternative courses, talked about laying of the various Marks ODA (outer distance mark of start), Windward Mark(s), Leeward Marks etc and possible additional configurations that she might employ. She talked about Mark positioning and the communication between committee boat and the Mark layers. There was a little experience sharing by Lesley Anderson (Race Officer on June 8) regarding a problem in communication between the various members of the team that had occurred on Race Day-1 on June 8 and the action taken to correct the problem.

Next Strompf-Jepsen talk about Flags to raise and the timing of raising and lowering of the flags to let boats know their starting status. She then allocated duties to the Race Assisting team… Ok, ready to go!

At 9.45am the committee boat left the Hebe Haven Jetty to investigate condition, choose a suitable race start position, to check wind direction and speed to decide length of course and Marker positions.

The weather had been wet all the previous night and rain was still falling when the “Fraser Doig” left the Jetty but it was looking brighter and people were feeling more optimistic. But there was some consternation as wind speed was very low and the weather forecast did not indicate much improvement. However, it seemed that there was a possibility that the wind would pick up to about 7-knts and gust at 11-knts from a Southerly direction by 11.00am the official race start time.

With no wind in Shelter Cove, Strompf-Jepsen decided to proceed past Shelter Island to see if conditions were better further from shore. An ‘L’ flag was raised to tell the numerous boats that had already gathered, to follow the committee boat. Several small craft (safety boats) with Markers buoys on board were holding approximate Marker positions relative to the committee boat and an inflatable was sent a kilometre further south to report wind speed and direction – still virtually nothing – wind speed when the machine registered at all was less than a knot. …… Hold positions and let’s see if it improves was the message from the committee boat.

By this time about 60 boats had assembled ready for action some were optimistically trying out their sails and sail deployment techniques. One or two Spinnakers surprisingly bulging in the mild conditions, but boat speeds were still slow. Most boats were static or maneuvering under engine power. Boat crews were beginning to relax and just have normal day chat.

The start time was delayed awaiting improvements in the conditions. The committee boat team tried desperately to find a better spot for the races and at times there was the glimmer of hope … 2-knts… 3-knts but the breeze soon fell away again. After waiting 2 hours it was nearing 1.00pm, the forecast was for no improvement and disappointingly the decision was made to abandon races for the day.

Disappointing as the decision was, some boats were seen heading off to the nearby coast for a seafood lunch… so the final decision was not that bad!

Skipper of “Merlin”, Steve Bourne commented “RO Inge Strompf-Jepsen did a great job abandoning the race only to see the breeze came in 10 minutes later…..a tad frustrating but in another 10 minutes it died again but this time completely”.

“Two races is a big chunk out of the series and we can only pray they are resailed so we get the discards back in the series.”

“Massive turnout of 60 boats endured strange winds from the south east offshore but northerly nearer Sai Kung, with a massive hole in the middle where the wind must have been going straight up, as it had been doing for the last few days. Tad problematic for any race officer” Bourne added.

Next Races
The Hebe Haven Quest Yachting Typhoon Series extends to nine races over 6-Days of racing through to Aug 23. The next Race Day for the Typhoon Series is Sunday July 6.