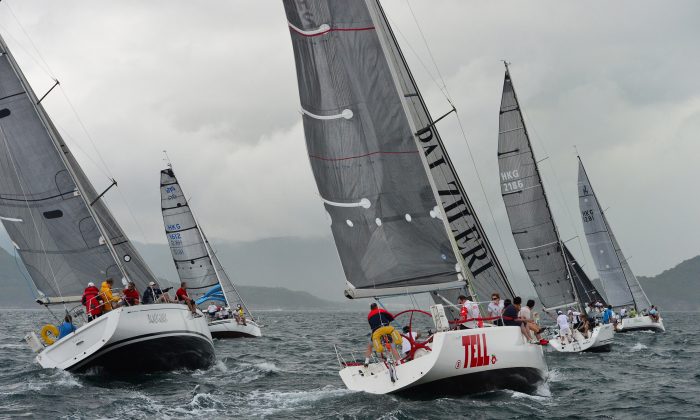 IRC division boats set off in Race 10, the planned last race of the series in the Hebe Haven Jeanneau Spring Saturday Series at Port Shelter on Saturday May 9, 2-15. (Bill Cox/Epoch Times)
HK Sports

A Twist in the Tail for Saturday Races

HONG KONG—The final race day for the Hebe Haven Jeanneau Spring Saturday Series took place last Saturday May 9 with IRC and HKPN divisions but Dragon Class boats did not join the afternoon event. “Stingray” the only Sports Boat joined in with the HKPN division.

The afternoon races, the last for Race Officer (RO) Rob Allen (at least for a while), began quite normally with a briefing to his team about the final two races of the series after which the committee boat headed for Port Shelter in good time to set the course for the first race. Checking the wind, it was blowing south-westerly and gusting at 10 to 15kts.

The first race (race-9) started on time at 2.30pm for the 8 IRC competitors but included only “Mojito”, “Outrageous” and “Goddess” of the real series contenders. “Ambush” took line honours, but “Mojito” took first place on corrected time followed by “Stella”, “Gambit”, “Blackjack”, “Outrageous”, “Goddess” and “RB”.

In the HKPN division, Jazz continued her success in the series by taking line honours and first place, followed by Ichiban, DEA II, Tara, Applause, X-Terminator, covering the top 6-places.

Change of Plan
At the end of race-9 the wind dropped and as if playing a joke on Race Officer Allen, completely changed direction by 180 degrees. RO Allen signaled a delay and the committee boat headed downwind to set a new course, but as it did so the wind changed direction and was so variable it almost had the committee boat going round in circles to position itself for the next race; but finally the wind settled down and a new course was set.

As race-10 was started and IRC boats set off, a thunderstorm blew in and although HKPN boats did cross the start line, by that time lightening was flashing across the water. Allen sent out a message to all boats that he was cancelling the race for safety reasons. RO Allen explained “I did not want a disaster in my last race at Hebe”. It is a pity that lightning interfered as the conditions were getting quite interesting!

Series results
The series which in the end consisted of races-3 to -9 inclusive (7-races not 10) brought success for “Mojito”, “Lighthorse” and “Outrageous” in the IRC disvision; and “Applause”, “DEA II” and “Tara” in the HKPN division. “Lighthorse” maintained her 2nd place although not taking part on the last day.