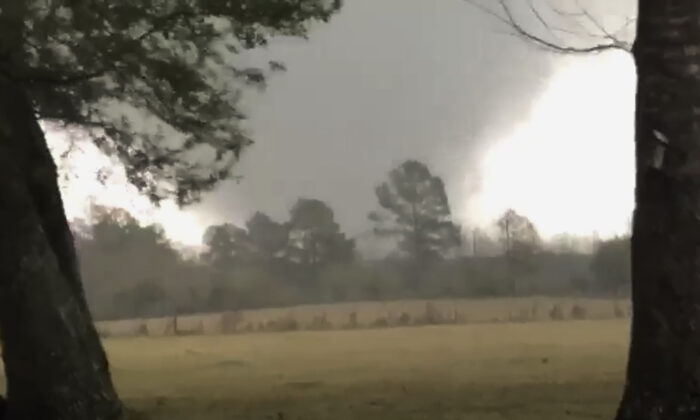 This photo provided by Heather Welch shows a tornado in Rosepine, La., on Dec. 16, 2019. (Heather Welch via AP)
US News

A Triple Threat Storm Could Bring Tornadoes, Snow and Flooding to Much of the US This Weekend

A powerful storm system set to affect much of the country this weekend could be a triple threat, with the possibility of severe storms and tornadoes, ice and snow, and flooding.

Millions of people in the eastern half of the United States—in the southeast, Midwest, Great Lakes Region and the Northeast—could feel the effects, said CNN meteorologist Dave Hennen.

Here’s how the different regions could be affected.

Tornadoes and Damaging Winds Across the South

Severe weather, including possible tornadoes, damaging wind and large hail, is possible in much of the South on Friday and Saturday, Hennen said.

The risk of damaging wind gusts became even more apparent Thursday, prompting the National Weather Service’s Storm Prediction Center to issue a moderate risk of severe weather at level 4 of 5 for parts of northwestern Louisiana and a stretch of eastern Texas.

Residents from the Gulf Coast north to Missouri could be hit by severe weather Friday afternoon and into the overnight hours. The greatest threat encompasses cities in eastern Texas like Dallas and Houston as well as Shreveport, Louisiana, Hennen said.

On Saturday the danger will shift to cover much of the Southeast, including cities like New Orleans and Baton Rouge in Louisiana; Birmingham, Montgomery and Mobile in Alabama; and Atlanta.

Residents in these regions should “make sure your smartphone weather notifications are turned on. Some of these storms will be traveling at 60 mph and you may only have minutes to react,” said CNN meteorologist Chad Myers.

Snow and Ice in the Midwest

Colder areas to the north could feel the effects of a significant snow and ice storm, which the National Weather Service in Chicago called a “powerhouse storm system.”

Parts of Illinois, southern Wisconsin and Michigan could see heavy snow fall as the storm moves east, with 6 inches of snow possible in some areas, Hennen said. Upstate New York and New England could see snow as well.

A dangerous ice storm will form over the Great Lakes region, and widespread power outages are possible.

“We certainly have a complicated mess on our hands,” the National Weather Service in Grand Rapids, Michigan, said.

A separate round of storms will bring heavy snow into the higher elevations of the Northwest, Hennen said.

Winter storm watches were posted for the Cascades and the northern Rocky Mountains, with the weather service predicting snowfall of up to 2 feet. The threat there includes avalanche danger, with warnings posted in parts of Idaho and Montana.

A Flooding Threat From Texas to Michigan

More than 30 million people were under some sort of flood watch Thursday from Texas to Michigan, including cities like Tulsa, Oklahoma; Little Rock, Arkansas; St. Louis, Missouri; Indianapolis, Indiana, and Chicago.

Widespread rainfall totals between 3 and 6 inches are likely, Hennen said, anywhere from the Southeast to the Ohio Valley and into the Great Lakes region.