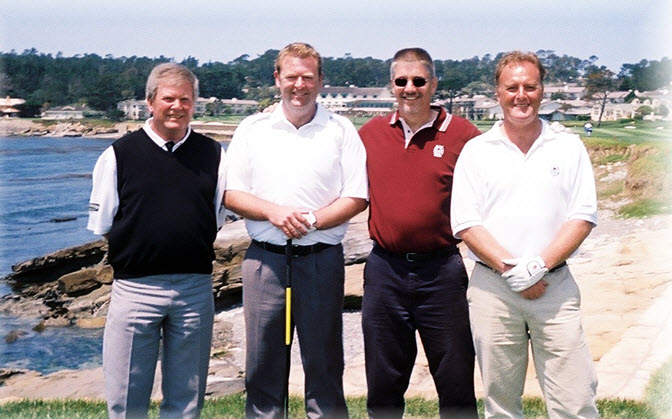 A Tribute to Bonding on the Golf Course

Golf. It’s the most social of all the sports. It’s just you and your competitors against the same element—the golf course.

In football, opposing players are too busy breaking each other’s bones (and in hockey their teeth) to talk anything other than trash—golf has no defensive players stopping you from reaching the hole.

Instead, deals are made, friends are won, and clubs may be thrown—in frustration, that is. It’s just the nature of the game.

“The Flem Cup” is a funny, heartwarming, yet real-life tragic story of trans-Atlantic friends who turned an annual golf outing into a U.S. versus England friendly team competition.

It makes for the ultimate bonding sport.

“In golf, it’s an entirely social game. Whether or not I’m playing against someone else, really it’s not like he’s defending my shot,” said author and golf enthusiast Scott Dow in a recent interview with Epoch Times.

“It’s a one-on-none sport, other than you’re playing your mind and the course itself,” said Dow.

Though the highlights of the book are the on-course competitions between friends—and all the entertaining gamesmanship leading up to them—the story’s gripping central plot is actually Dow, a one-time atheist, and his own personal redemption—especially after tragedy strikes.

A lover of most any sport, Dow turned business trips into golf outings and eventually found a kindred spirit in Jennings, from across the pond, who partnered with him to form the funny, yet serious, country-versus-country Flem Cup competition (with format similarities to the Ryder Cup) back in 2001.

Jennings, like Dow, was in the high tech industrial maintenance business, and by the time he helped start the Flem Cup, and all the antics associated with it, he was a fit man in his 40s, who enjoyed everything social about life. He was especially a comedic storyteller whose charm and quick wit made him friends in any situations. Like Dow, he loved golf too.

“We just hit it off,” said Dow of the popular Jennings. “Although we had very different games we really were both very competitive so we had that aspect of it. Then when it came to business we were both very kind of creative, thinking outside-the-box kind of guys. “He was just such a magnetic personality kind of guy, that everyone just liked hanging out with him.”

Dow, who captained and recruited the American team, and Jennings, his counterpart on the English side, came up with the idea together in 2001 during an alcohol-induced skirmish, as a fun way to add some spice—and money—to an already fun competition.

In addition, all the action—on and off the course—was recorded on a website Dow created called FlemCup.com. Though they only played annually, there were always plenty of rumors for Dow to report—some were even true.

Although the site was meant to entertain the group with made-up stories from cleverly named golf contributors (like Datzit Indaruf and Iva Tufshot) it ended up being a major reason to write the book as a tribute to his best friend, while also telling the story of his own personal evolution.

“I never could never ever have gone back and recreated anything to the degree that I was able to without the fact that totally, unwittingly, this entire episode had been pretty much documented from the beginning,” said Dow of the website.

Interwoven between the stories of the two best friends and their adventures on and off the golf course, Dow tells the gut-wrenching story of his own life.

Originally the piece was going to just be a testament to his good friend Jennings, but Dow thought that wouldn’t be interesting enough.

“I finally came to the conclusion that the only the way this becomes a really good story, or at least a story that’s most compelling, is if I’m telling my story going through it.”

So interwoven between the stories of the two best friends and their adventures on and off the golf course, he tells the gut-wrenching story of his own life, which had been going downhill. The unhappy marriage, his on and off relationship with his own children, and then the eventual collapse of his business.

Needing an escape from his own life at times, the only thing he really looked forward to were the get-togethers with his best friend and their annual golf competition—and all the hilarity that ensued when a group of guys get together to drink and play golf.

“The golf part of the story is about all of us, in particular Ian and myself, and all the funny things that went on during the trips and everything else,” said Dow.

But in late 2001—after the first competition (won by the England team)—a subdued Jennings called his good friend Dow with the news that no friend wants to hear.

Yet with the dreaded disease in remission, the Flem Cup continued on for three more years.

Then the inevitable finally happens and Dow was suddenly left without his best friend. But the book doesn’t end there.

“It’s not this, here we had this great friendship and we played these awesome golf matches and then Ian dies and that was the end of it,” said Dow. “It does end, for both him and I, on a hopeful note that some day in heaven this can be continued.”

Maybe it will—save for the wager of course.