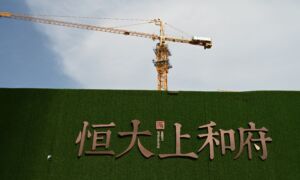 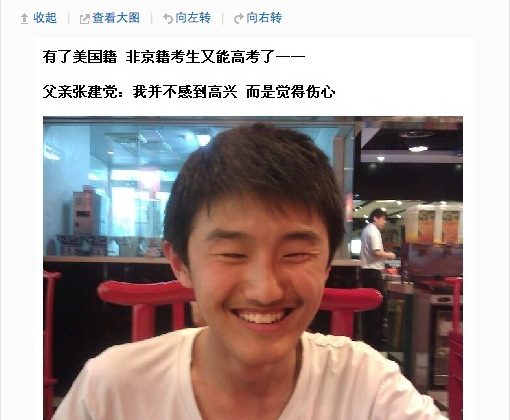 A screenshot from the Sina Weibo account of Chengdu Business Daily, a local Chinese newspaper. Zhang Tu, a top Chinese high-school student, is going to the United States to study after finding the restrictive hukou system in China limited his options. (Screenshot by Epoch Times)
China

The recent case of a top Chinese high-school student, who eventually decided to study in the United States instead of China, has brought harsh public attention against a restrictive form of social control carried over from the Maoist era.

Zhang Tu, a second year high school student in Beijing, has effectively been barred from China’s top universities due to the burdensome household registration system, or hukou system, used by the Communist Party.

Zhang boasts an academic standing in the top 30 of his entire school. This rank would place him easily in the ranks of the 70 to 80 students from his school to be admitted to Beijing’s Tsinghua University or Peking University, China’s top schools and the dream of every Chinese student—except for one thing.

The young man’s household registration will not allow him to take the college entrance exams in Beijing, almost a necessity for admission to either of Beijing’s most esteemed universities. However, his mother’s U. S. citizenship may allow him to attend a university there, regardless of his birthplace.

The household registration system, a form of social control used by the Chinese Communist Party since the 1950sm categorizes people as “rural” or “urban,” and ties a Chinese citizen to his place of his birth. More than identity card, the despised registration system controls where he may live and work, and above all, his and his children’s education. A student may legally attend school or take college entrance exams only in his place of registration, with few exceptions.

Zhang Tu’s father, Zhang Jiandang, has recognized his son’s intelligence and academic diligence for several years. Because the boy’s step mother has Beijing residency, he is allowed to attend middle school and high school there. Zhang Jiandang attempted to enroll his son in a high-status Beijing middle school; the boy successfully passed an exam and impressed the admissions teacher. However, when the she found out that he did not have Beijing residency, she told him, “Don’t even think about it.”

Even when the father offered to pay more tuition, the teacher informed him that it was not a financial issue, but a residency issue, and explained that Zhang Tu would not be able to participate in the college entrance exams in Beijing after graduation.

Zhang Jiandang had been confident that his son was “guaranteed to be admitted to Tsinghua University based on his academic record,” and did not realize the iron restraints of the household registration system, which is blind to academic achievements.

A new college entrance exam policy would allow a child without residency to take the exam in the city where his parents work, but this policy has not yet been implemented.

Worried that the policy might not be in place by the time Zhang Tu reached his senior year, and rather than have his son attend a second-rate Chinese university, Zhang Jiandang enrolled him in an international study class to prepare him to study overseas. Many of their family friends have also sent their children abroad for college because of the residency restriction.

Zhang Tu’s mother, a United States citizen, had suggested he come to the U.S. to study. As the child of a citizen, Zhang would be able take his college entrance exams in the United States with no residency registration problems. Zhang Tu might even be eligible for U.S. citizenship himself, as the child of a naturalized citizen.

The irony is that if he were a U.S. citizen, Zhang Tu would be eligible to sit for the college entrance exam in Beijing, according to the Ministry of Education policy published on Weibo, and would even be awarded some bonus points.

But since it is not certain that he would qualify for the foreign student exemption, Zhang Tu will continue with his plans to study in the United States.