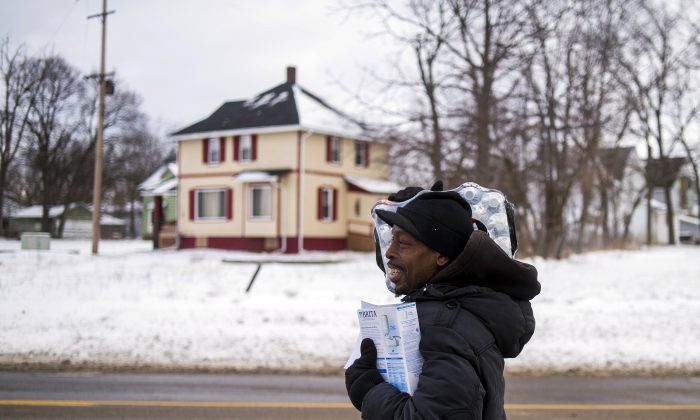 Flint resident Charles Chatmon carries a free water filter and case of water away from a fire station where members of the Michigan National Guard helped distribute supplies to aid in the city's water crisis, in Flint, Mich., on Jan. 13, 2016. Flint's tap water became contaminated with too much lead after the city switched its water supply in 2014 to save money while under state financial management. (Jake May/The Flint Journal-MLive.com via AP)
US

A look at some of the key events in the development of the Flint water crisis:

APRIL 2014: In an effort to save money, Flint begins drawing its water from the Flint River instead of relying on water from Detroit. The move is considered temporary while the city waits to connect to a new regional water system. Residents immediately complain about the smell, taste and appearance of the water. They also raise health concerns, reporting rashes, hair loss and other problems.

JANUARY 2015: Flint seeks an evaluation of its efforts to improve the water amid concerns that it contains potentially harmful levels of a disinfection byproduct. Detroit offers to reconnect Flint to its water system. Flint insists its water is safe.

JAN. 28: Flint residents snap up 200 cases of bottled water in 30 minutes in a giveaway program. More giveaways will follow in ensuing months.

FEBRUARY: A 40-member advisory committee is formed to address concerns over Flint’s water. Mayor Dayne Walling says the committee will ensure the community is involved in the issue.

MARCH 19: Flint promises to spend $2.24 million on immediate improvements to its water supply.

MARCH 27: Flint officials say the quality of its water has improved and that testing finds the water meets all state and federal standards for safety.

SEPT. 24: A group of doctors led by Dr. Mona Hanna-Attisha of Hurley Medical Center urges Flint to stop using the Flint River for water after finding high levels of lead in the blood of children. State regulators insist the water is safe.

SEPT. 29: Gov. Rick Snyder pledges to take action in response to the lead levels. It’s the first acknowledgment by the state that lead is a problem.

OCT. 2: Snyder announces that the state will spend $1 million to buy water filters and test water in Flint public schools.

OCT. 8: Snyder calls for Flint to go back to using water from Detroit’s system again.

OCT. 15: The Michigan Legislature and Snyder approve nearly $9.4 million in aid to Flint, including $6 million to help switch its drinking water back to Detroit. The legislation also includes money for water filters, inspections and lab testing.

DEC. 29: Snyder accepts the resignation of Department of Environmental Quality Director Dan Wyant and apologizes for what occurred in Flint.

JAN. 5: Snyder declares a state of emergency in Flint, the same day federal officials confirm that they are investigating.

JAN. 12: Snyder activates the Michigan National Guard to help distribute bottled water and filters in Flint and asks the federal government for help.

JAN. 13: Michigan health officials report an increase in Legionnaires’ disease cases during periods over the past two years in the county that includes Flint.