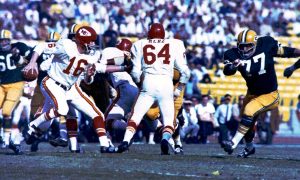 A Second Book Excerpt From: "When It Was Just a Game"
0 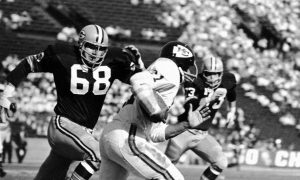 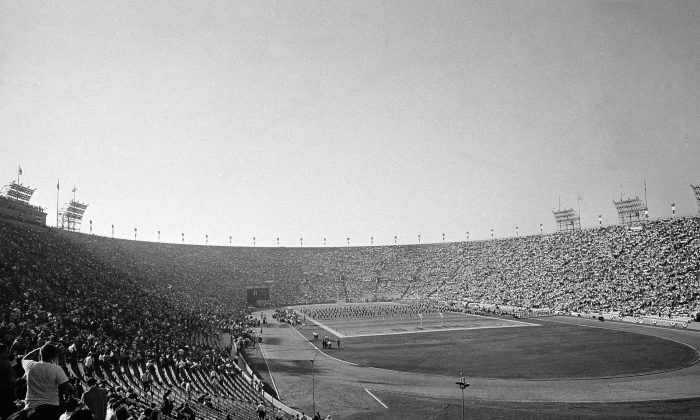 A Third Excerpt From the Book: “When It Was Just a Game”

With Number 50 – almost upon us, it seems like looking back on the mythic, epic, historic first one is in order. My latest labor of love When It Was Just a Game has been getting lots of exposure. Here for your reading enjoyment is just a piece of the action:

One of Commissioner Pete Rozelle’s suggestions for the name of the new game was “The Big One.” That name never caught on. “Pro Bowl” was another Rozelle idea. Had the name been adopted there would have been confusion, for that was the name used for the NFL’s All-Star Game. Another name floated was “World Series of Football,” which died quickly after being deemed too imitative of baseball’s Fall Classic.

It was Rozelle’s idea to call the contest the AFL–NFL World Championship Game. While the name was made official, it never took off . It was too cumbersome, a mouthful, no good for newspaper headlines.

BOYD DOWLER: We thought it was kind of funny they called it the Super Bowl; that was a feature of the media more than anybody else. But the AFL–NFL Championship Bowl Game, yeah, that’s a lot more words than necessary. Super Bowl is a lot more practical.

SHARON HUNT: The name AFL–NFL Championship Game was too unwieldy, hard to get straight.

Two days after the hullabaloo about the merger, New York Times sports columnist Arthur Daley wrote about what the future had in store: the “new super duper football game for what amounts to the championship of the world.”

The Los Angeles Times reported on September 4, 1966, that the game was being “referred to by some as the Super Bowl.”

LAMAR HUNT JR: My parents got divorced, and my dad would come over and pick us up. And I remember showing him the Super Ball, the “Whammy” super ball, and saying, “Hey look, this will bounce over the house, this ball.”

You know my dad was not going to be preoccupied with toys that were given to children. You know, he might have bounced the ball. We just remember demonstrating it.

But then what happened going forward is my dad was in an owner’s meeting. They were trying to figure out what to call the last game, the championship game. I don’t know if he had the ball with him, as some reports suggest.

My dad said, “Well, we need to come up with a name, something like the “Super Bowl.”

And then he said, “Actually, that’s not a very good name. We can come up with something better.”

But “Super Bowl” stuck in the media and word of mouth. It kind of came out of my dad’s mouth. What do you want to call it? Power of suggestion or just an idea or whatever, it stuck. And the inspiration was that Super Ball. I feel blessed to be the son of guy who really came up with the name.

BILL MCNUTT III: I became very close friends with the Hunt children. We would go over to Dallas, and I would play with that ball with them. We were just amazed at this ball. It was the most popular toy of its day.

The Wham-O Super Ball was introduced in 1965. Invented by Norm Stingley, a chemical engineer at the Bettis Rubber Company in Whittier, California, the ball was made of Zectron. The “Super Ball” could bounce six times higher than any regular rubber ball. Millions were sold, and it remained a craze through the 1960s.

A Second Book Excerpt From: “When It Was Just a Game”

PAUL ZIMMERMAN: The National Football League hierarchy frowned on the term “Super Bowl,” but the fans and the media liked it and used it, and Super Bowl would become the name to represent professional football’s championship game.

SHARON HUNT: It was something else that a toy a child was playing with could have inspired the name.

JERRY IZENBERG: The afternoon of the merger, the switchboard rang at the NFL offices, and the guy said, “I want 20 tickets for the title game.”

They said, “We don’t even know where it’s going to be.”

(Autographed, mint, discounted copies of WHEN IT WAS JUST A GAME are available direct from the author)

Dr. Harvey Frommer is in his 40th year of writing books. A noted oral historian and sports journalist, the author of 43 sports books including the classics: best-selling New York City Baseball, 1947-1957 and best-selling “Shoeless Joe and Ragtime Baseball. He also authored the acclaimed Remembering Yankee Stadium and best-selling Remembering Fenway Park. The prolific Frommer is working on “the Ultimate Yankee book” to be published in 2017.