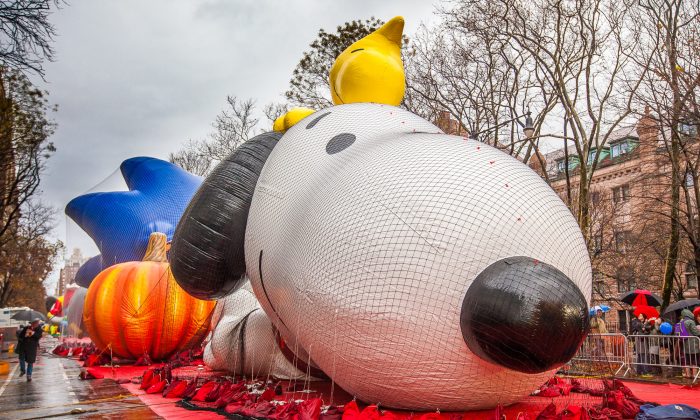 NEW YORK—It’s Snoopy, SpongeBob SquarePants, and Papa Smurf versus the storm that has been sweeping New York in the form of winds, rain, and snow. This Thanksgiving holiday, Macy’s parade balloons might have to be taken down if strong winds threaten to topple the giant balloons onto spectators.

One such tragic event in 1997, when a Cat in the Hat balloon toppled a light pole that collapsed on a woman spectator, lead to a city rule that the balloons cannot be flown if sustained winds exceed 23 mph and gusts exceed 34 mph.

Current weather forecasts predict tomorrow’s wind speeds to be around 20 mph with gusts of over 37 mph.

“The decision is made based on real-time on the scene weather data not forecasts,” said Macy’s spokesman, Orlando Veras, in an email. All 16 giant balloons were inflated according to plan Wednesday night.

“We are closely monitoring the weather as we do each year,” Veras said.

“We have a licensed meteorologist here on site, who’s tapped in to the national weather service. … We can pull weather from all around the area,” said John Piper, vice president at Macy’s Parade Studio, during the inflating of the balloons in front of the American Museum of Natural History. Piper said that if the balloons have to come down, they would use a “standard deflation process.”

Macy’s will work closely with NYPD to determine if the balloons will fly and at what heights. NYPD will have the last word on that decision.

Balloons have only been grounded once in the parade’s 87-year history, when bad weather kept them from flying in 1971.