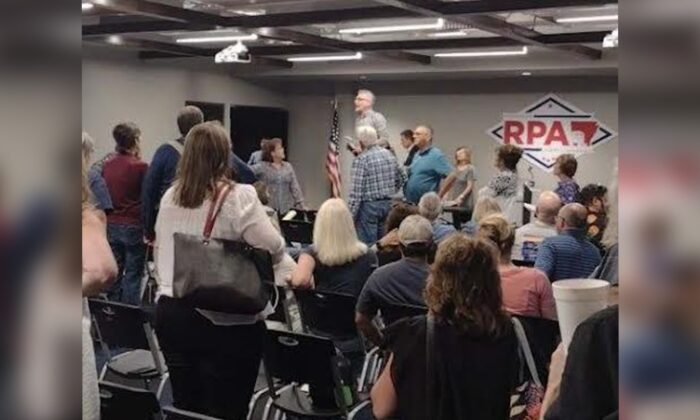 Delegates at the Pulaski County Committee on July 21. (Courtesy of Kenneth Wallis)
Politics

A grassroots movement to get involved in the Republican party in an Arkansas county has been met with resistance from established seat holders who have argued that the process by which the new members won their seats wasn’t valid.

After 71 people voted out the current chair and delegate seats of the Pulaski County Republican Committee (PCRC) last month in Little Rock, Arkansas, state delegates at the Republican Party of Arkansas’ (RPA) state convention on July 23 voted in favor of the Republicans’ Credentials Committee’s decision to disqualify the new delegates for reasons those new delegates say are untrue.

Members of the PCRC alleged in their complaint (pdf) to the credentials committee that the election of delegates for the state convention held during the Pulaski County Convention on June 30 was fraught with irregularities.

They accused the newly elected chairperson, Lorri Justice, of having “no plan” while attempting a slate election with a preprinted list of delegates.

For the first set of ballots, they accused them of coding ballots for voting preference.

According to the complaint, the second and third set of ballots also contained errors, though the complaint alleges that despite the errors, Justice, whom they claim was acting on partiality, “allowed the ballots and the votes to continue so they would have their preferred slate of candidates in place.”

Response to the Complaint

In the response to the complaint (pdf) to the credentials committee, Justice wrote that the procedure was based on the recommendations given by officials within the convention as well as legal counsel.

All complaints were accommodated and resolved, with no complaints existing prior to the final ballot, she wrote.

On the accusation that the newly elected group had “no plan or process for proceeding with the election of delegates,” Justice called this “bellyaching,” and “not a real complaint.”

She called the accusation that she tried to run a slate election false.

“One committee member complained that another was making multiple nominations at once,” Justice said.  “Notwithstanding that this was proper and not a slate election, the delay-intending buffoonery was fully accommodated, and nominations were made individually.”

In addition, she said the complaint that the ballots were coded was also false.

“Different fonts were inadvertently used on a draft ballot,” Justice wrote. “This was simply a clerical error that was corrected once we were made aware of it. The complained-of ballot was not used. All errors were corrected, and all complaints were accommodated prior to the actual ballot.”

On the accusation that she was not impartial, she said, “Not only is this false, but the complainants have also hidden from you that some signatories are involved in an internecine conflict between the North Pulaski Republican Women’s group and the Pulaski Women’s group, with the former upset about the changes in control of the Pulaski County Republican Party in favor of the latter.”

Justice called the complaint a manifestation of how the old guard of Arkansas Republicans have “lost their grip on the “county party.”

“So, rather than this being a genuine complaint, it reflects a family feud by disgruntled individuals who, like faded movie stars, are screaming over losing their spotlight,” Justice said.

Justice told The Epoch Times that the purpose of hers and the groups’ decision to get involved was in response to a sense of activism that was stirred in the wake of a national climate that she said appears to have “spiraled out of control.”

“There was how COVID was handled, to the stolen election, and now we have inflation, and it’s really spurring people to get involved locally,” Justice said. “We can’t change anything in Washington, but we can make changes here in our own backyard.”

However, from the beginning, the established Republicans in the county put up a wall, Justice said.

“The attitude was very poor,” she said. “We were clearly not wanted in the Republican party, and they weren’t even trying to hide it.”

Like how Democrats operate, Justice said there were attempts at gaslighting and belittling.

On the night of the vote when they needed to print ballots, “there suddenly was no print paper,” and after they had initially won their seats as delegates, the former chair wouldn’t hand over the list of members.

The disappearance of the paper on which to print the ballots was just one in many examples of why the meeting lasted from 6 p.m. to 2:30 a.m., Justice said.

At the credentials committee hearing on Friday, July 22, the day before the state convention, Justice said she was the only one allowed in the building as the delegates whose legitimacy was being challenged were left outside with two armed guards blocking the door.

Kenneth Wallis, one of the delegates who took footage of the scene outside of the RPA’s building, recorded whom he told The Epoch Times was 2nd District Chair Melonaie Gullick using the American Flag to block him from filming the proceedings while having law enforcement tell them they can’t be on the property and threatening them with arrest.

“There were about 30 to 40 people there when I arrived being kept outside in the heat,” Wallis said. “We were dressed in business casual because it was our understanding that we would be able to testify, but instead they decided to lock us out.”

‘This Was About Power’

“There they were, members of the county Republican Party left outside in 103-degree heat, most of them elderly people, not a bunch of rabble-rousers,” Justice said.

During the hearing, Justice said it became clear that this wasn’t about the ballots.

Delegate Rick McKay told The Epoch Times that he witnessed “multiple critical edits” being made to the final ballot under Gullick’s supervision.

“So, the very moment she took that file that was given to her from the floor of the convention and took it upon herself to start editing it, she took responsibility for any mistakes that didn’t get corrected on the ballot that she was in opposition to,” McKay said.

The PCRC, the RPA, and Gullick didn’t respond to The Epoch Times’ request for comment.

The bottom line, Justice said, is that the vote was legitimate.

“It was a good election,” she said. “It should have never been in question.”

According to Justice, however, the complaint isn’t about the legitimacy of the election, but about power.

“They didn’t like that these new people won,” Justice said. “They perceived it as a takeover.”

In the state convention that next day, Arkansas Republicans voted 303–295 to uphold the credentials committee’s disqualification of the delegates.

“Half the facts were presented,” Justice said, “and that’s what they drew from because that’s all they knew.”

Justice said she didn’t get the opportunity to speak at the state convention.

“So, they basically disenfranchised 71 people who were duly voted as delegates to the convention,” Justice said. “It’s a shame.”

Similar stories of established Republicans marginalizing new members have surfaced in other states such as Nebraska, where The Post Millennial reported that six Republicans in the state were told they weren’t welcome at the Republican Party’s state convention as division grows between Trump supporters, who are opposed to Republican Gov. Pete Ricketts, and the old guard, who support Ricketts.

Sen. Alan Clark, who was at the state convention, told The Epoch Times that the vote to not seat the new delegates was “a terrible decision.”

“The majority of delegates who voted not to seat them did that based on the belief that rules were broken and because of the recommendation of the credentials committee,” Clark said.

However, the facts weren’t clear at the state convention, Clark said, and it’s only now becoming apparent that it was a fair election.

The old guard has always resisted new infusions of members, Clark said, but eventually those new groups, like the Tea Party, blend in with the old.

“We have lots of new enthusiastic conservatives coming into the party, and in some counties, they are taking over,” Clark said. “That’s how politics works. You need that new blood for the party to survive.”

When the old order gets shaken up, there will be some who are upset, Clark said.

“But we can’t win if we can’t embrace the new people coming in,” Clark said.