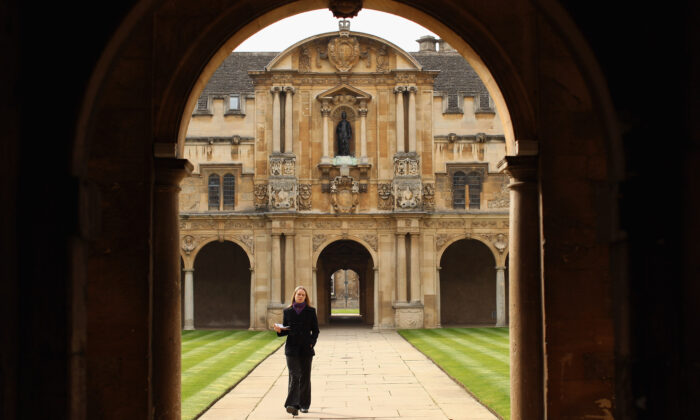 A Teachable Moment at Oxford: Lessons About Social Reform and Fossil Fuels

Thanks to The Wall Street Journal for reporting on a student protest at St. John’s College, Oxford. This story held a special resonance for me. I once studied under St. John’s scholar Archie Burnett, who introduced me to the writings of Solzhenitsyn and deepened my understanding of Shakespeare.

The protest was exceedingly unoriginal. A group of students gathered in St. John’s quadrangle and demanded that the college divest its shares of oil companies. What came as a breath of fresh air was the bursar’s effective and instructive response to the protesters.

The bursar, Andrew Parker, told the students that it was not possible for him to unilaterally and immediately sell the shares. He then said: “But I can arrange for the gas central heating in college to be switched off with immediate effect. Please let me know if you support this proposal.”

Needless to say, the students didn’t accept Parker’s offer. Instead, they grumbled about how unfair such a suggestion was. This infantile sense of justice epitomizes the mindset of many save-the-world idealists today: Other people must make sacrifices, but not me—I’m too important, because I’m one of the enlightened ones who knows what everyone must do to make our world a better place. It’s the double standard of so many celebrities, politicians, and billionaires, who fly around the world in private jets telling the rest of us that we are CO2 criminals for driving our cars too much.

This is dangerous; it’s elitist to the core, and is nascent tyranny. (It also shows a gross ignorance about how the world works, but I’ll expand on that further down.)

The New Testament in the Bible teaches us a lot about how to treat each other. One lesson is to “first remove the beam from your own eye, and then you will see clearly enough to remove the speck from your brother’s eye” (Matt. 7:5, ISV).

In the United States (and I presume in England), citizens are all free and equal under the law. If we feel that consuming fossil fuels is dangerous to our future, we are free to desist from consuming them. But what these pampered college students want is to establish an oligarchy of likeminded people to force others to pay the price for change rather than freely paying that price themselves.

For all their talk about the alleged evils of economic inequality, they’re enthusiastic advocates for political inequality. They have no moral compunctions or self-doubt about setting themselves up as a ruling class whose vital and necessary function is to tell the rest of us lesser beings how to live.

When I was in college, the same type of self-righteous but ignorant protests—often about the same issues—were common then, too. (Say “OK, Boomer” to me if you want, young people, but we wanted to end war, poverty, and pollution before you did.)

When you think about it, colleges provide the ideal conditions from which such short-sighted and self-absorbed protests can spring up.

First, there’s the fact that our emotions develop earlier than a well-rounded, mature intellect, making younger people in particular suckers for facile fallacies such as socialism.

Second, there’s the artificiality of often-idyllic campus life, which causes college students to refer to life off campus as “the real world.” Being disconnected from the real world, they propose policies that make no sense in the real world.

Third, their adult role models are the proverbial ivory-tower professors who have the freedom to sit in classrooms, offices, and libraries thinking up all sorts of ways to change the world. Too often, the result has been ill-thought-out protests like the one at St. John’s. Too seldom have college administrators had the backbone to say, “If you don’t like the way we do it here, you are welcome to go elsewhere—and by the way, if you really are opposed to fossil fuels, we will help you reduce your consumption of them.”

Now, besides the shallow, callow self-righteousness of college students yammering about divestment is the disappointing fact that—even at ages 18–22—they don’t have a clue what a futile gesture they’re making. They’re appallingly, and I think inexcusably, ignorant about elementary economics and how the world words.

Targeting the stock of fossil fuels-producing companies is aiming at the wrong target. There’s only one way to hurt those companies, and that’s to demand (use) less of what they produce. As long as people want to consume fossil fuels, companies will continue to produce them.

Theoretically, you could pass a law banning the production of fossil fuels, but once people realize how undesirable it would be to have to live without them (a fact of life that the Oxford mob demonstrated by their own unwillingness to give them up) that law would quickly be overturned—unless, of course, the people were subject to a socialist dictatorship.

Let’s suppose for a moment that divestment catches on and holders of fossil fuel stocks dump them willy-nilly, crashing the price. What would happen then? Astute investors (the Chinese perhaps?) would swoop in and buy up valuable assets at steep discounts. Yes, I said “valuable.” Shares in oil and gas companies will be valuable as long as the underlying enterprises produce something that people clearly value.

It’s irrational and self-destructive to regard fossil fuels as though they’re some gigantic curse on humankind. Look at this graph, which shows how closely related economic progress has been with the availability of affordable, reliable energy:

The human race will, without any political intervention needed, outgrow the use of fossil fuels someday. This evolutionary step will happen just as most of the world’s population has already voluntarily moved beyond wood as its primary source of energy. When viable economically affordable substitutes supplant oil and gas, fine; but until that happens, we’re going to keep consuming fossil fuels.

Hats off to St. John’s Andrew Parker for teaching a valuable lesson to the well-meaning but ignorant children who prattle about divestment from fossil fuels.