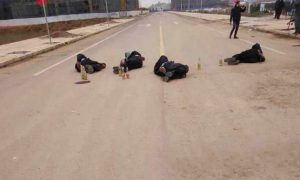 A Tale of Two Railways and 30,000 Protesters in Southwest China

When residents of Linshui County in southwest China were informed that a planned 200-kilometer (124-mile) stretch of railway would be built to bypass their community, tens of thousands of Linshui’s 1 million people filled the streets in protest.

Clashes with local police on May 17 left four residents dead and over 100 injured.

The disagreement has its genesis in two competing plans for a rail line connecting the 17-million strong city of Chongqing with Dazhou, Sichuan Province, where Linshui County is located. One proposal, dubbed “the East Line,” would bring the railroad through Linshui, which is isolated from air or water transport.

The “East Line” has also been supported by local officials who believe that it’s going to boost the county’s economic development, according to state-run Beijing News.

However, on May 7, the Guang’an Urban Development Committee allegedly responded to an online query that another plan, the so-called West Line, would be chosen instead. Guang’an is the hometown of former Communist Party leader Deng Xiaoping.

Guang’an’s 858,000 residents are already serviced by two rail lines, while Linshui has none.

“There are two railways passing through Guang’an. We are the only county in the region that has nothing […] The Guang’an authorities are taking advantage of their prerogative [Guang’an being the hometown of Deng] to monopolize resources,” stated one open letter.

At 9 in the morning of May 17, thousands of people began to gather in Wanxing Square in the center of Linshui County.

The day’s events started peacefully, with a parade and a circulating petition. People held banners saying “Railway for Millions of Linshui Residents” and chanted slogans as they marched. By afternoon, some 30,000 people were in the demonstration, according to Radio Television Hong Kong.

Residents took photos of the advancing police and injured protesters. They uploaded them to Chinese social media platforms.

When police tried to retreat, the people of Linshui, understandably angry, barraged them with rocks, the witness said in a phone call.

The events in Linshui and online reactions have been heavily and swiftly censored by Chinese regime authorities. State-run media has reported the incident, but avoided any mention of the violent crackdown.

It’s not the first time Chinese in the country’s southwest have stood up to authoritarianism over the issue of rail infrastructure.

Over 100 years ago, in August 1911, Chinese republican groups were galvanized into action when the imperial government tried to nationalize the railway construction projects in various provinces, including Sichuan, and sell the rights to foreign industrials. The resulting public uproar led to the Railway Protection Movement, which aimed to maintain local control over the infrastructure.

Though imperial troops suppressed the movement in a blood-filled response, the movement is considered to have directly contributed to the famous Wuchang Uprising in nearby Hubei Province. In October, garrisoned troops mutinied, sparking off the Xinhai Revolution that brought an end to over 2,000 years of dynastic rule and gave birth to the Republic of China.