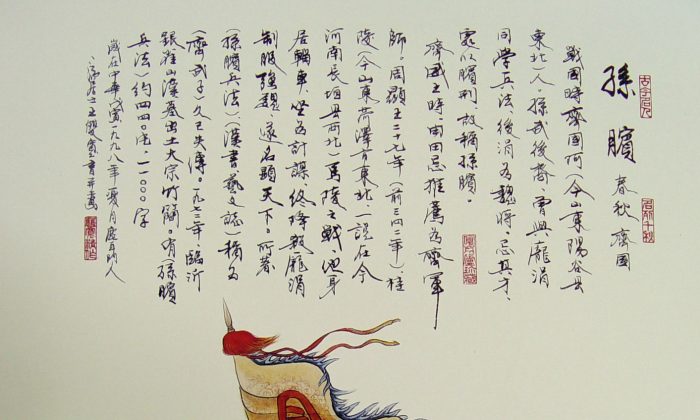 A Tale of Two Generals, a Prophecy, and the Search for the ‘Art of War’

Sun Zi’s timeless primer on strategy, “The Art of War,” has informed the thoughts of many a calculating mind, from generals to CEOs—and it also saved Sun’s own descendant in China, Sun Bin, from the jaws of peril and treachery.

But it was the book’s teachings of wisdom, sincerity, benevolence, courage, and strictness that led the younger Sun through his darkest days of betrayal and humiliation at the hands of Pang Juan, his former sworn brother.

From a young age, both Sun and Pang learned from the Taoist hermit, Guiguzi, in an eastern Chinese valley. This master specialized not just in strategy but also in reading fortunes, debate, and personal cultivation.

He had a prophecy about his two disciples: Pang, ever ambitious, needed to be loyal to Sun, and if he failed in this he would meet his end by a thousand arrows.

Pang then went to serve the powerful state of Wei, making a name for himself as an unparalleled general. But he forgot Guiguzi’s prophecy.

While Pang Juan was out earning fame and glory, Sun Bin had remained with their master in that remote valley. It was only then that Guiguzi revealed that he was in possession of the “Art of War,” the 13-part manual to military strategy that had been written over a hundred years ago by Sun’s ancestor Sun Zi. This text had once been lost, but the old hermit had preserved a copy.

Whoever mastered the teachings laid out in the “Art of War,” Guiguzi said, would have the ability to march across the world unopposed. Pang Juan, Guiguzi decided, didn’t have the character to match such knowledge, but it would be safe in Sun’s hands. Within three days, he had learned the text by heart.

When Sun Bin went to join Pang Juan in Wei State, Guiguzi warned him that he would one day achieve greatness, but only in the service of his native land, Qi.

A Heart of Darkness

No sooner had Sun Bin arrived at Wei State did Pang Juan begin to undermine him. Eager to learn the secrets Sun had studied with Guiguzi in his absence, he conspired to have Sun Bin’s knees cut out and his face tattooed, marking him as a traitor and forcing him into Pang Juan’s care.

At first, thinking that Pang had saved him, Sun began writing out the “Art of War” to repay the debt. Owing to a sympathetic servant’s timely intervention, however, Sun discovered the evil designs of his brother. So he feigned madness, burned the text he had produced, and stealthily escaped to Qi State, where he began to fulfill Guiguzi’s prophecy.

The Return of a Strategist

Unaware of Sun’s escape, Pang Juan continued to win victories for his state. The two finally met in battle, and Pang was bested the first time. Not long after, they had a second encounter, in which Guiguzi’s prophecy came to fruition.

Traversing the pass of Maling the night before battle, Pang found that the trees had been felled to slow his advance; he was elated at the thought of his enemy’s terror. Yet one tree remained standing, its bark stripped. Etched there were eight characters, illegible in the darkness. So Pang lit a torch, and revealed the vow: “Pang Juan shall meet death beneath this tree.”

Just then, 10,000 archers from Sun Bin’s army, hidden in the hills, fired their arrows from all directions. The elusive words, recalling Pang’s broken vow, were now reality.

As Pang lay dying, Sun Bin approached him, only to hear the general curse himself for having not killed Sun earlier. Before Sun could speak, Pang Juan had already drawn his sword and committed suicide.

The “Art of War” presents warfare as a necessary evil that should be handled surgically and as decisively as possible. Sun Zi teaches stoic efficiency, detached from temporary successes and setbacks.

In this way, the best commanders resolve conflicts effortlessly.

“Hence his victories bring him neither reputation for wisdom nor credit for courage. He wins his battles by making no mistakes,” Sun Zi wrote.

Pang Juan, in addition to betraying his fellow student and ignoring his master, was attached to the glory and fortune that being a general offered him. He was presumptive and paranoid, leading him to turn Sun Bin, once his sworn brother, into a deadly enemy.

As the “Art of War” would have described the two disciples, “Thus it is that in war the victorious strategist only seeks battle after the victory has been won, whereas he who is destined to defeat first fights and afterward looks for victory.”

Despite all the wrongs Pang had committed against him, Sun Bin did not bear any grudges. As for Sun Bin himself, he followed in his ancestor’s footsteps. After entrusting the “Art of War” to the Qi authorities, Sun returned to the wilderness and resided in seclusion.