A Tale of Two Denuclearizations: Trump Wants to Take, Kim Wants to Keep 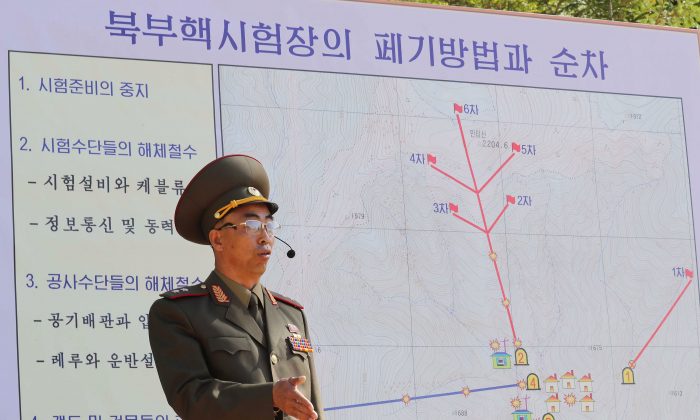 Among the top items on the agenda of the summit between President Donald Trump and North Korean dictator Kim Jong Un on June 12 is the issue of North Korea’s nuclear weapons, which the United States demands Pyongyang liquidate completely, commonly referred to as “denuclearization.”

Experts have repeatedly warned, however, that Pyongyang has either never clearly defined denuclearization, or worse, that it has a totally different understanding of what the term means.

For decades, U.S. policy toward North Korea has been to demand the complete, verifiable, and irreversible denuclearization of North Korea’s nuclear weapons program. What this means is rather straightforward: That Pyongyang would destroy all of its nukes, and would not be able to make a new one again, ever.

In this sense, “irreversible” means that Pyongyang’s existing facilities used to conduct nuclear tests and manufacture warheads cannot be reactivated after they’ve been dismantled. The United States has been using this language since as early as 2006 in a resolution by the UN Security Council.

“Verifiable” means that Pyongyang should allow outside observers to go inside the country from time to time so they can inspect the dismantled sites and other places, to make sure nukes are not being made again.

In addition, Trump’s national security adviser John Bolton, a well-known hardliner on North Korea, took a step further and said in a May 13 interview that a denuclearization deal should include the removal of North Korean ballistic missiles and chemical and biological weapons. However, such demands are unlikely to be agreed to by Pyongyang.

On the other hand, few, if any, observers of North Korea believe that the Kim regime is ready to give up its nuclear weapons completely.

“Despite all of the happy talk that we’ve heard from the president [Trump] about nice letters and kind words [from Kim Jong Un], there is nothing that has changed in North Korea’s statements on denuclearization,” said Victor Cha, the Korea chair at the Center for Strategic & International Studies (CSIS) at a June 8 briefing on the upcoming summit.

North Korea has never explained whether its understanding of the term denuclearization means the liquidation of its own nuclear arsenal, weapons that Pyongyang has consistently insisted are a legitimate tool to ensure regime survival. Being recognized as a nuclear-weapons state also gives Pyongyang an additional sense of prestige and security.

Even if Kim agreed to a U.S. version of denuclearization, observers say it might just be a trick to extort economic and political concessions from the international community, considering North Korea’s long record of violating agreements that it made with other countries.

“North Koreans will open lots of trap doors for you,” Cha said, “One of them would be a promise, a commitment to a peace treaty and normalization in return for vague promises of denuclearization far into the future.”

What’s more, it has been widely noted by observers that Pyongyang deliberately uses the term to refer to U.S. strategic nuclear deterrence capability, or the nuclear umbrella over the Korean Peninsula and the surrounding region.

In this sense, Pyongyang sees denuclearization as meaning that the United States will withdraw its security guarantee to protect South Korea with nuclear weapons, something that most experts agree Trump would find totally unacceptable.

North Korea is also expected to ask for a reduction or complete removal of the 28,000 U.S. troops stationed in South Korea as a precondition to Pyongyang committing to any degree of denuclearization.

“When you conclude a peace treaty, it eventually undermines the rationale for having U.S. troop presence in South Korea,” said Sue Mi Terry, a senior fellow at the Korea chair of CSIS. North Korea doesn’t “have to ask for a troop-presence reduction, they just need to ask for a peace treaty to get to that goal.”