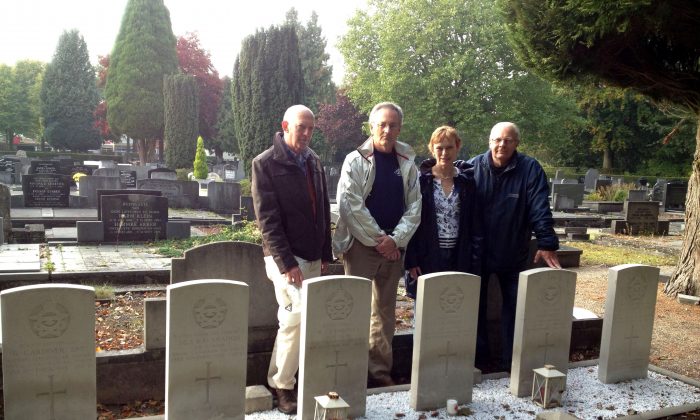 Don Odell (2nd L) during his visit to Ter Apel, Netherlands, where the six RCAF aircrew, including his uncle, were buried after their plane was shot down during the Second World War. With him are the organizers of a memorial ceremony held in November 2013 on the 70th anniversary of the downing of the plane. (Courtesy of Don Odell)
Canada

A Tale of Survival and Loss in WWII

On the night of Nov. 23, 1943, German fighter pilot Heinz-Wolfgang Schnaufer intercepted an allied plane with a crew of seven on their way back to England after carrying out a raid on Berlin.

Schnaufer was the Nazi’s night fighter ace, renowned for seldom missing his target, and that night was no exception. Over a little town called Ter Apel in the Netherlands, Schnaufer shot down the Lancaster bomber carrying the seven men.

Navigator Peter Cole—the sole survivor who parachuted to the ground and was captured by the Germans—said after the war that the last thing he saw as he was blown halfway out the door was the pilot with both feet on the dash trying to pull the plane out of the dive.

Among those killed that night was gunner Jim Odell of Wetaskiwin, Alberta. He and his younger brother, Bill Odell, joined the Royal Canadian Air Force in 1941. By the time Jim died he had completed 30 missions and had re-enlisted for his second tour of duty.

Bill was a supply officer with a spitfire squadron that operated a mobile air base. The airfield included 1,700 men tasked with building, dismantling, moving, and rebuilding the airfield as the front advanced across Europe, as well as supply and operate the spitfire squadron. Metal tracks laid on a field served as runways.

“His group were stationed in England until a week after D-Day, when they landed in Normandy and were initially stationed in Bayeaux,” says Don Odell, son of Bill and nephew of Jim. “They went from Bayeaux through France, up into Belgium, and into Holland, and he ended the war in a town in northern Germany.”

Odell, who hails from Red Deer, Alberta, has taken a keen interest in the family’s military history—perhaps not surprising since he had relatives who served in both world wars.

As well as his dad and his uncle Jim, his two uncles on his mother’s side also fought in the Second World War. They followed in the footsteps of their father, who in the Great War fought in the trenches and as a tank operator. Odell’s granduncle was killed in that war while fighting in Mesopotamia.

His mother too, played a part. She joined the RCAF after high school and during the Second World War was stationed near Victoria, British Columbia, as a wireless operator.

“My dad didn’t spend a lot of time talking about the war and what went on,” says Odell.

My dad didn’t spend a lot of time talking about the war and what went on.
— Don Odell

It was only when Bill was in his 80s that Odell learned more about his dad’s wartime experience, and that came about after a local Royal Canadian Legion member with a background in television decided to interview all the surviving men in the Wetaskiwin Legion who had served overseas and record it on video.

Probably one of the most perilous periods of the war for Bill was during the Battle of the Bulge from Dec. 16, 1944 to Jan. 25, 1945—the last major German offensive of the war. It started with a two-hour bombardment of Allied lines, followed by a huge armoured attack.

“The Germans put every aircraft they had in the air to attack Allied positions and airfields,” says Odell. “My dad’s group lost 50 aircraft on the ground, with many casualties. The operations had heavy losses on both sides, but the Allies could replace their aircraft and the Germans could not. So it proved to be the beginning of the end.”

When the ceasefire finally came, several German planes flew in from Norway to surrender at Bill’s mobile airfield to avoid being captured by the Russians.

After Odell’s mother died in 2013, he came across a cache of letters that he didn’t know existed, from Bill and Jim to their parents. Some revealed that for the two years after Jim was killed until the end of the war, there was speculation among family members of the Lancaster crew that the six men had somehow survived.

“One letter that I read quoted somebody from a different Lancaster who saw a bunch of parachutes coming out of a plane and they were suggesting that the guys might still have been alive somewhere. It’s very kind of torturous if you’re the people back home, hoping, because you want it to be true.”

When the war ended, Bill Odell was in northern Germany, close to the Dutch border, so one weekend he requisitioned a jeep and drove to Ter Apel to try and find out what happened. In a letter home to his parents, he described talking to the farmer whose barn the plane came down on and visiting the graves of the six crew members, thereby ending any hope that they might still be alive.

“These six and one Polish soldier are the only soldiers in the cemetery, which has been used by the villagers for hundreds of years,” he wrote.

“Flowers have been planted on the graves and they have been very well cared for. During the German occupation this was forbidden and twenty-seven people from the village were sent to Germany as forced labour for fixing up the graves.”

The graves are still meticulously looked after today. Odell visited Ter Apel in 2013 and discovered that some of the locals have gone to great lengths to keep the memory of the ill-fated Lancaster and its crew alive.

“They’ve taken a huge interest in it,” he says, noting that some of the townspeople have even reconstructed the last flight of the plane. Not only that. On the 70th anniversary of the downing of the plane, a big commemoration ceremony was held in honour of the six men.

“There were 500 or 600 people there and they had a military flypast, and the Canadian legion from Holland was there and the local mayor. So they made a very big event out of it,” he says.

“The Dutch people’s regard for Canadian servicemen is legendary.”

The Dutch people’s regard for Canadian servicemen is legendary.
— Don Odell

After the war ended Bill Odell remained in Europe for the balance of 1945 to assist with the demobilization.

He arrived back in Canada via ship to Halifax on New Year’s Day 1946 and headed home to Wetaskiwin. He had gone to the University of Alberta to become a pharmacist before joining the RCAF, and later in 1946 bought a drugstore in Wetaskiwin, which he ran until he retired in 1978.

“My dad had an active retirement and was blessed with good health until he died of a stroke in 2001 at the age of 85,” says Odell.

Peter Cole also survived. After being captured by the Germans he spent the remainder of the war as a POW. He died in England in the 1990s.

As for Heinz-Wolfgang Schnaufer, due to his incredible skill as a pilot he became the highest-scoring night fighter ace in the history of aerial warfare. In 1944 he was awarded the prestigious Knight’s Cross of the Iron Cross with Oak Leaves, Swords, and Diamonds—Nazi Germany’s highest military decoration.

After the war he returned to his hometown and took over the family wine business. During a wine-buying trip to France in 1950 he sustained injuries in a road accident and died a few days later. He was 30 years old.