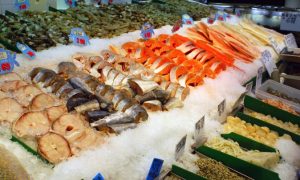 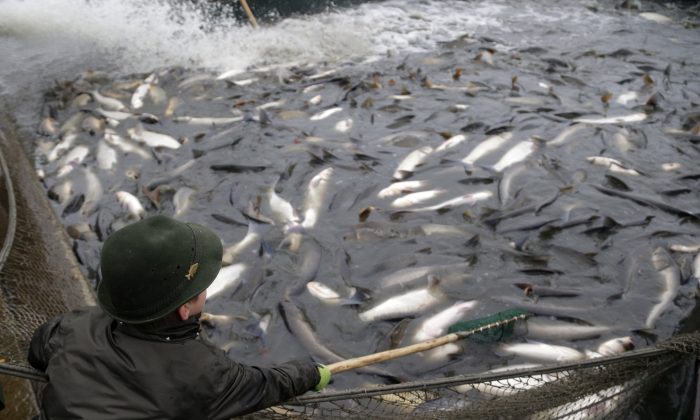 A young fisherman leans ton catch a fish during a traditional fish haul at the Vrkoc pond near the town of Pohorelice, Czech Republic, Saturday, Oct. 25, 2014. Fishermen use the traditional,centuries old way of catching the local carp, considered by Czechs a delicate Christmas meal. (AP Photo/Petr David Josek)
Environment

A Sustainable Approach for the World’s Fish Supply

China’s booming aquaculture industry is increasingly dependent on fishmeal made from wild-caught fish, a practice that depletes wild fish stocks. A new study conducted by institutions including Leiden University and Stanford offers a more sustainable path. The study appeared in the journal Science on 9 January.

The researchers propose recycling the waste by-products from seafood processing plants as feed for farm-raised fish. This would provide from one half to two-thirds of the amount of fishmeal currently needed by Chinese fish farms. The study was conducted by a research team led by postdoctoral fellow Ling Cao and Professor Rosamond Naylor from Stanford University. The team also included staff from Leiden University (PhD student Patrik Henriksson) and University of Wollongong, The Royal Swedish Academy of Sciences and Shanghai Ocean University.

China is the world’s leading producer, consumer and processor of fish, contributing one-third of the global supply. China’s fish production has tripled in the past 20 years, and about three-quarters of its supply now comes from fish farms. Yet the industry still places huge pressure on wild fisheries as its demand grows for fishmeal and fishoil made from wild-caught species. How China develops its aquaculture and aquafeeds sector can thus tip the balance of global seafood availability (ocean fish, crustaceans andshellfish). ‘There is a clear opportunity for positive change, but the economic and regulatory incentives for such change are not yet in place,’ said Naylor, the William Wrigley Professor in the School of Earth Sciences and director of the Center on Food Security and the Environment at Stanford.

Fishing in the coastal waters of China is poorly regulated and often involves taking in large quantities of ‘discards’ mixed in with the intended catch. This discard fish is unsuitable for human consumption and ends up in animal feeds, including in fishmeal that is fed to farm-raised fish. Many of the species of wild fish used for feeds have been fully exploited or overexploited, and reducing the demand for them can help protect fragile ocean ecosystems.One promising solution is to recycle the waste by-products (such as heads and innards) made by Chinese seafood processing plants. This waste, which can be 30 to 70 percent of the incoming volume of fish, is often discarded or discharged into nearby waters.

The team’s analysis shows that these processing wastes could satisfy between half and two-thirds of the current volume of fishmeal used by Chinese fish farmers. ‘It’s time to make serious decisions about managing and protecting ocean fisheries, and China will play a pivotal role in this process,’ says Naylor. ‘Collecting good data from China is an important starting point. But we also need a clear path toward more sustainable fisheries and aquaculture management, and that’s what we present in this paper.