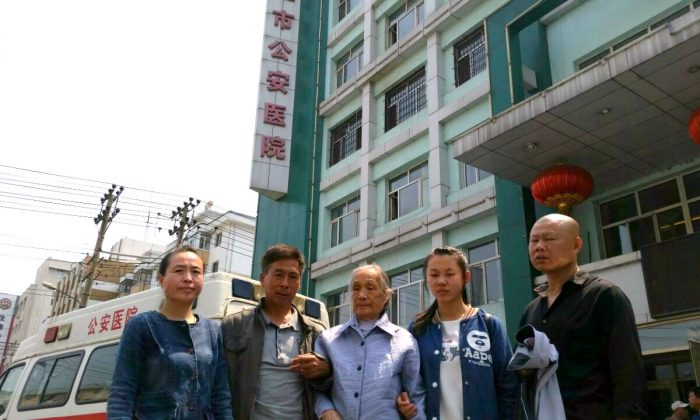 BOSTON—Zheng Enjun and his wife were forced to flee China so suddenly that they didn’t even pack their winter clothes.

He and his wife, Liu Liangxin, a pharmacist, were about to be targeted in a police dragnet being thrown across cities and towns in the northeastern province of Heilongjiang. They went into hiding before boarding a plane to Boston, where their son is completing his doctorate in mathematics.

On a hard marble bench in an atrium at the Hynes Convention Center in Boston, Zheng, 56, spoke about the mysterious death in custody of Gao Yixi, a fellow practitioner of Falun Gong, the spiritual discipline that has been persecuted in China for 17 years.

Gao, the 45-year-old manager of Manzhouli Luxury Restaurant, was, along with his wife, hauled out of his bed at midnight on April 19 in the small city of Muling on the Russian border, a few hours away from Vladivostok. The reason for the police action is still unclear. Gao was dead 10 days later, by the morning of April 30. His wife is still in custody.

The death triggered a massive roundup of Falun Gong practitioners in the area, Zheng said.

Zheng arrived in Boston just days prior, after his wife heard from a relative, who had a friend in the secret police, that they were on the arrest list. The couple have practiced Falun Gong for nearly 20 years and still remember when it was one of the most mainstream things in China.

“She got told at 10 a.m. The security department at work was looking to speak with her. A co-worker came and said, ‘You should hurry up and get out of here,'” Zheng said.

They laid low with relatives for a month before getting on a plane.

“They’re afraid that the information will be exposed,” Zheng said. “Anyone who practices Falun Gong and knows how to use a computer is being arrested.”

In this case, practically everyone who has been in contact with Gao Meixin, the daughter of the deceased, has also been arrested, according to Zheng. He provided the name of one local Falun Gong practitioner who had been taken into custody; Epoch Times later contacted this individual and confirmed he had been detained. Gao’s wife was held in detention for several weeks; his older sister was put under soft detention, and his daughter has been under house arrest for over a month, even prevented from attending school.

Zheng said the arrests have extended to Jiamusi, his city, as well as Harbin and Shuangcheng.

Panic that the details of Gao Yixi’s death may be exposed seems to be what’s driving the police’s behavior, including mass arrests, refusal to provide information to the family, and constant threats.

Falun Gong, a traditional Chinese meditation practice, is brutally persecuted in China, but local officials who carry out the campaign are still often afraid of gaining negative publicity in the West. Phone calls by insistent volunteers directly to their cellphones, home phone numbers, or offices, also act as deterrents. Falun Gong practitioners, both in China and overseas, usually mobilize to make these calls in the wake of persecution incidents.

The circumstances of Gao’s death have prompted a range of local and far-flung activism. On the ground, Falun Gong practitioners, forced to become activists, have created fliers—a six-page version reviewed by Epoch Times ran to nearly 9,000 Chinese characters—and slipped them under the doors of Mudanjiang residents, along with the letters written by Gao’s family members, setting forth what’s known about the death of Gao.

Mostly this relates to the insistence by the police on an urgent autopsy, in contravention of Chinese regulations and law. Police told the brother, and then the daughter, that prison regulations demanded an autopsy be carried out within 24 hours.

According to the relevant provision issued by the Supreme People’s Procuratorate, there is no such time restriction—moreover, the regulation states that the family must agree to the autopsy.

In Gao’s case, doctors were cutting him open within minutes after his daughter, Gao Meixin, saw him.

“When I entered to look at my father’s body, policemen restrained my arms behind my back to prevent me from seeing my father,” she wrote in her testimony. She was kept about two meters away. “I cried out for my father to wake up, shouting that I am his daughter, and asking why he can’t hear me. Then I was ordered to control my emotions before being dragged out by two policemen.”

She knelt down and begged them not to conduct an autopsy. A few minutes later she entered the room again and found they had already started cutting into the body.

The authorities’ haste in carrying out the autopsy is unclear. There is no evidence that he had his organs removed before death, but it is possible that his skin or corneas may have been viable for harvest, given that they must be removed within six hours of death to be viable for transplant. The police may also have simply been intent on sullying the body to make the cause of death more difficult to determine.

Family members, including Gao Yixi’s wife, older sister, daughter, and mother, are now stuck in a Kafkaesque trap. They cannot lodge a criminal complaint with the prosecutor until they obtain the physical exam and autopsy reports from the police. But whenever they demand those documents from the police, they are simply rebuffed, told the police don’t have the records, or that they do and that they’ll be sent to them within seven days. (They never were.) Even the hospital has refused to provide his records.

An examination of transcripts of the interactions between the family and the various official organs—the police, four departments in the hospital, the Procuratorate—makes clear their helplessness.

One transcript shows how, after being ricocheted between different departments at the Mudanjiang Public Security Hospital, they arrived before the officious Director Yu, responsible for the section of the prison that holds inmates. “I’m only in charge of patients sent by public security,” she says, in an attempt to fob them off.

The lawyer explained that Gao was indeed such a patient. “I’m not listening to you. You think you can tell me what to do?” Yu says. After Gao’s daughter beseeches her about who they ought to speak to, Yu says, “I don’t know anything. Go find whomever you need to.”

Yu takes a call for 30 minutes, and upon her return acts as though they’ve just met for the first time.

“Didn’t I just explain it to you?” Gao’s sister says.

“You didn’t tell me. I don’t know what you’re talking about,” Yu stabs back. After Gao’s daughter protests, Yu says, “You speak to me with a little more respect, youngster, OK?”

There are seven such interactions at the hospital in a transcript file, one of four provided to Epoch Times by one of Gao’s family members. The family has hired the well-known human rights lawyer Ma Lianshun to take on the case.

“Under the circumstances that the family strenuously demanded that an autopsy not be conducted, the relevant judicial authorities deceived Gao Yixi’s wife,” Ma said in a telephone interview. “The entire process of the case has violated the spirit of the law.”

In Boston, Zheng Enjun was furious as he recounted the turn of events. “When they kill people they see it as a matter of national security. Whoever reveals it is violating national security, and they punish you for that,”  he said. “It should be that if you discover bad people, then the country rewards [you]. In China, it’s the opposite.”

Zheng and his wife Liu, having arrived with no notice, are now bunking in with their son, daughter-in-law, and grandson.

“We didn’t come out to expose this,” he said. In China, Zheng was a well-compensated electrical inspection engineer. The position gave him an opportunity to demonstrate the values of Falun Gong to his fellow citizens, he said.

He described one instance in which he had to explain to a baffled contractor just why he would not accept an envelope stuffed with 50,000 yuan, or $7,500, to approve shoddy workmanship. (Falun Gong practitioners don’t take bribes, was the explanation.)

“I didn’t want to leave. I didn’t even think of it. But there was no other way. The persecution came so suddenly and we were helpless,” he said. He and his wife are preparing to apply for asylum, and will be purchasing winter clothes in a few months. They’re currently sleeping on their son’s balcony.