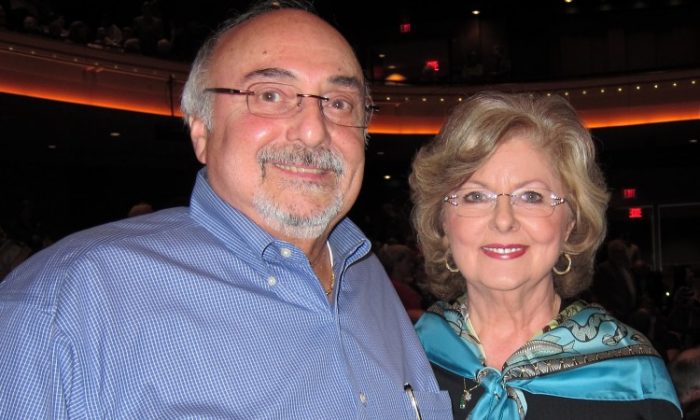 New York-based Shen Yun artists travel the world on a mission to revive China’s 5,000 year old divinely inspired culture. Mr. Salamone said, “I think the culture has just been fascinating, very colorful! The music is wonderful; the dancers are excellent, and she [indicating his wife] has a better understanding than I, because she is more cultural.”

Before he retired, Mr. Salamone had been an executive with Reynolds and Reynolds.

Mrs. Salamone said: “Just fantastic! The music is so fabulous, and the dancers are so energetic, and the serenity of every message—serenity, relaxation, and the history of the Chinese. I think it is fabulous.”

Classical Chinese dance lies at the heart of Shen Yun’s performances. The artists turn an intensely difficult art form into something beautiful and effortless, according to the company’s website.

Mrs. Salamone expressed her amazement and said that the stories are communicated through the music, and through the movements, and the dancing. “It’s phenomenal! I’ve never seen this show before, and I find it absolutely relaxing, and just a phenomenal show; it really is. There is not one element that stands out. I think it’s the whole combination, and I have really enjoyed the soprano and the baritone singers as well, giving their message … of your vows and the history itself.”

In addition to its music, Shen Yun travels with a full orchestra as well as classically trained, world-class singers.

Through the songs and dances, she felt, “A strong message of compassion and structure, and the love of the gods, and the earth. It’s just phenomenal!”

In conclusion she said she would highly recommend Shen Yun to her friends. “I would absolutely recommend this to them!”