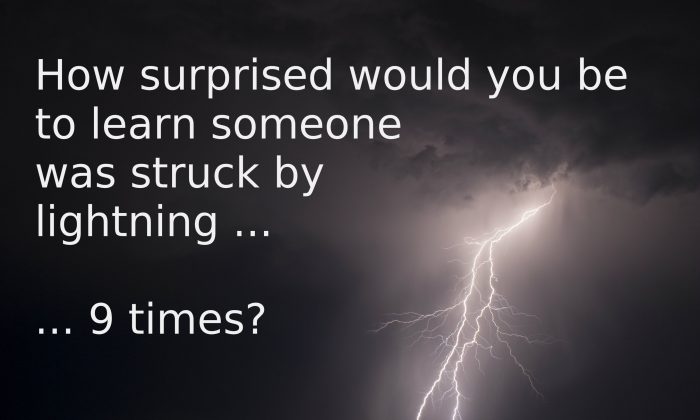 A Statistician’s Approach to Coincidences: What Are the Odds? (Part 2)

Are we able to intuitively calculate the odds?
By Bernard D. Beitman, M.D.
biggersmaller
Print

When people experience coincidences, they often think, “Wow, the chances of this occurring are so small!” Some statisticians say, however, that people aren’t good at intuitively calculating the chances. What may seem improbable, could actually be very probable.

We tend to neglect the base rate. We become focused on the unlikeliness of the current event and do not appreciate the frequency of events like it.

The base rate tells us how likely a certain kind of event is—how likely it is for someone to be struck by lightning, for example.

In the United States, according to the National Weather Service, the likelihood of being struck by lightning is about 1 in 1.1 million. That’s because about 330 people are struck each year, and the population of the United States is about 300 million.

The likelihood of being struck by lightning is about 1 in 1.1 million.

The personal importance of coincidences in our lives can also prevent us from considering the base rate. Because the current event happened to us it assumes greater importance. It feels more special, more improbable.

What do these human difficulties in estimating probabilities (base rate neglect and the birthday problem discussed in part 1) have to do with coincidences?

As I have already suggested, when a person judges a coincidence to be improbable, the standard statistician claims that that the person has become enamored with unlikeliness—it’s actually not that unlikely. It turns out us ordinary people may not be so bad at judging whether a coincidence is random or not.

We may not be so bad at judging whether a coincidence is random or not.

Most of us have difficulty figuring out how many people need to be in a room for there to be a 50 percent chance that any two people have the same birthday. Research involving college students came at the problem from the other end.

Instead of asking people to estimate the base rate of a hypothetical event like the birthday problem, the researchers asked the students to judge whether specific coincidences were random or not.

A random event generator is a machine designed to produce random events, such as displaying the 1s or 0s of binary code in a random order. The researchers displayed some random events as well as some events that were not random. The test subjects were asked to decide which events were random and which were not.

The students were pretty accurate. They were good at deciding which seemed random and which ones seemed to require some explanation, even though they did not know what the explanation might be.

If the coincidence is random, “just a coincidence,” then we can dismiss it. If it is not random, we begin to look for explanations.

If the coincidence is random, ‘just a coincidence,’ then we can dismiss it. If it is not random, we begin to look for explanations.

If you open a door to go outside and it starts to rain, that would be “just a coincidence.” You will not find a causal explanation for the correlation.

If you walk outside and a neighbor says, “Hi,” you have a cause for the intersection of your walking outside and the greeting.

If the coincidence is neither obviously random nor obviously explainable, then we are tempted to wonder about a cause. That’s just human nature.

This article was previously published by Psychology Today, as part of a series of articles by Bernard Beitman, M.D., on the science of synchronicity and serendipity. Beitman is a visiting professor at the University of Virginia. He is the former chair of the University of Missouri-Columbia department of psychiatry. See his blog, Connecting With Coincidence, to learn more about Coincidence Studies.