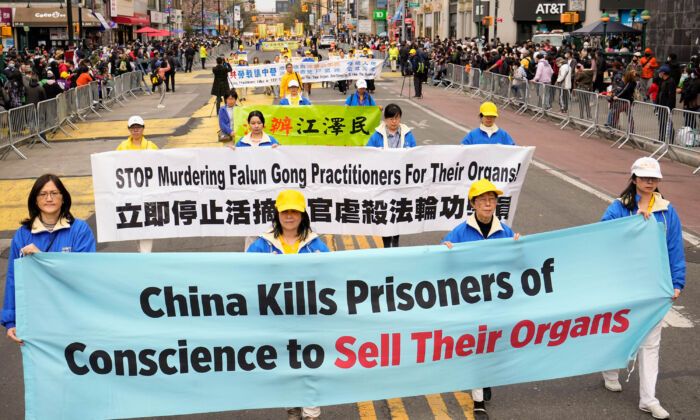 A State Department Report on Organ Harvesting the CCP Could Love

For each of the past 26 years, the U.S. State Department has briefly mentioned the egregious practice of forced organ harvesting in China in its congressionally mandated annual international human rights reports.

This year’s chapter on China creates a new sub-section, titled “Organ Harvesting,” which held the promise for, finally, some solid coverage of the mountain of documentation now accumulated on this atrocity.

As it turns out, the new heading is an empty promise. The report’s account of China’s organ harvesting is skimpier than ever. Merely two sentences long, the new section downplays the single new development that it does bother to mention and omits important findings from its prior reporting.

“Some activists and organizations accused the government of forcibly harvesting organs from prisoners of conscience, including religious and spiritual adherents such as Falun Gong practitioners and Muslim detainees in Xinjiang. In June several UN experts issued a statement expressing alarm concerning allegations of organ harvesting ‘targeting minorities, including Falun Gong practitioners, Uyghurs, Tibetans, Muslims and Christians, in detention in China.’”

Its first sentence is drawn from last year’s report. Still, it is weakened by the omission of its previously reported pertinent information, such as that Xinjiang authorities collected biometric data from Muslim detainees, including “fingerprints, iris scans, and blood types,” all procedures required to match organs for successful transplant surgeries.

Moreover, the 2022 report describes the evidence as second-hand accusations from unnamed “activists and organizations,” while, in 2021, it was presented more persuasively as testimony from internment camp survivors.

A former Xinjiang detainee, a Christian who was recently rescued with the help of the State Department and the Victims of Communism Foundation, told me that he, too, had been subjected to blood sampling and a heart check. Over the decades, thousands of Falun Gong detention survivors gave similar reports.

The State Department’s 2020 report contained another startling survivor account dropped from the current report, namely that “healthy young men would be spared the physical abuse that other detainees suffered and given health screenings … before disappearing.”

That report also cited additional persuasive sources, including “medical professionals and human rights researchers,” who attested to the atrocity and questioned the “voluntary nature of the system, the accuracy of official statistics, and official claims about the source of organs.”

The State Department makes no findings of its own in the 2022 China report, although it did so in the reports from 2001 through 2006. Those unequivocally affirmed that there were “no reliable statistics on how many organ transplants occurred using organs from executed prisoners” and even concluded in the 2004 report that it was “a significant number.”

The lack of reliable official data on China’s sourcing of transplant organs continues, as the Chinese Communist Party (CCP) treats critical elements of it as national security secrets, but the 2022 report no longer makes the assertion.

Despite detailed documentation to the contrary between 2006 and 2017 by the late Canadian member of Parliament David Kilgour, human rights lawyer David Matas, and journalist Ethan Gutmann, the U.S. State Department made the sweeping and unwarranted finding in its 2018 report that “in January 2015 the government officially ended the long-standing practice of involuntarily harvesting the organs of executed prisoners for use in transplants.”

The State Department’s source for this claim was Huang Jiefu, whom it identified merely as a former health minister, but who also served as a longtime member of the CCP’s Central Committee (see Carnegie Endowment for International Peace’s ChinaVitae.com).

Huang also was authoritatively quoted in the 2018 report, stating that Beijing has “zero tolerance” for forced organ harvesting and, in the State reports from 2010 through 2015, promising each year that organ harvesting reform was just around the corner.

The 2016 and 2017 State reports raised doubts about the reliability of China’s data before the 2018 report’s unequivocal assurance—adopted as the U.S. State Department’s own finding, no less—that forced organ harvesting had been officially ended. Huang’s assertions of reform should be viewed as the naked propaganda that they were.

The 2020 report cited a finding that official Chinese data on organ sourcing were “falsified,” based on statistical forensics by Australian scholar Matthew Robertson in a Victims of Communism Foundation study.

The same conclusion was reached that year in the judgment of the prestigious and independent China Tribunal, chaired by distinguished British jurist Sir Geoffrey Nice (lead prosecutor of the Slobodan Milosevic trial at the International Criminal Court). The tribunal added that there is an “incomprehensible gap” between hospital data on transplants annually and the number of eligible voluntary organ donors reported by Beijing.

Both important studies were omitted from mention in the 2022 State report, even as the CCP’s claims were repeated by the State Department, year after year.

The second and final sentence of the report’s “Organ Harvesting” section refers to “allegations” that alarmed “several UN experts.” Unmentioned is that the statement referred to is an extraordinary action, carrying significant weight. It was signed by a dozen top U.N. human rights professionals from various regions, specializing in a wide range of human rights and, significantly, working independently of their governments.

Their joining together to sound the alarm represents a remarkable departure from regular U.N. processes.

They cite witness testimony that they found “credible,” including that blood samples and organ assessments consistent with organ transplant protocols were taken from detainees who weren’t death row prisoners and exclusively from various religious minorities. The State Department makes no comment on these critical revelations.

This year’s report is the first drafted during the Biden administration. The inexplicably muted account of China’s organ harvesting seems aimed at mollifying the CCP, which takes great pains to hide the facts about this shocking practice and furiously denies that it continues.

It also may be aimed at forestalling an important congressional initiative, the Stop Transplant Abuse Act of 2021, introduced by Rep. Chris Smith (R-N.J.) with bipartisan support in the House and Senate.