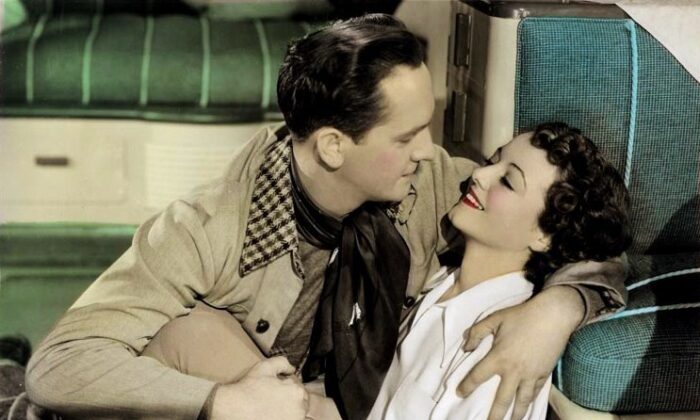 A publicity still of Fredric March and Janet Gaynor in "A Star Is Born" (1937). (Public Domain)
Viewpoints

When I first saw the list of films to be played at the 2022 Turner Classic Movie Film Festival, I noticed “A Star is Born” (1937) among the titles. I had only watched this movie twice, but I knew I loved it upon first seeing it.

Janet Gaynor and Fredric March as the leads, the beautifully tragic story, the authentic Hollywood locations, and the early three-strip Technicolor are only a few of the reasons I wanted to experience this film on the big screen at the TCMFF. It was played at the Hollywood Legion Theater at American Legion Post 43, a few blocks from the other locations, but it was worth the short drive to see this 1930s masterpiece.

The title “A Star is Born” is a popular one, but you may have never seen or even heard of this version. This was the original, directed by William A. Wellman and produced by David O. Selznick. Some consider even this film to be a remake because of its striking similarities to the 1932 Selznick production “What Price Hollywood?” Apparently, the earlier film’s writers did not consider the later movie a remake, since they threatened to sue Selznick for plagiarism. Nevertheless, the 1937 film was so successful that it has been remade three times, in 1954 with Judy Garland and James Mason, in 1976 with Barbra Streisand and Kris Kristofferson, and in 2018 with Lady Gaga and Bradley Cooper. Beginning with 1954, all subsequent films have turned the leading lady into a singer instead of an actress. While many hold the 1954 film to be the greatest incarnation of this story, I personally prefer this one.

If you’ve seen any of these movies, you already know the basic plot. Esther Blodgett (Gaynor) leaves her country home to pursue her dreams of becoming an actress in Hollywood. Once there, getting a job proves harder than she had imagined. Her only friend, assistant director Danny McGuire (Andy Devine), eventually gets her a job as a waitress at a swanky party. There, she meets movie star Norman Maine (March), whose reckless drinking is beginning to jeopardize his career. Taking an instant liking to Esther, Norman asks his producer, Oliver Niles (Adolphe Menjou), to give her a screen test. She starts with bit parts but gets her big break when Norman suggests her for the lead in his next movie. Renamed Vicki Lester, she is very successful in the film, far more so than Norman.

As she is catapulted to stardom, she and Norman fall in love and get married. He gives up drinking and tries to reform. However, his years of partying have ruined his reputation with co-workers and audiences alike. Is Vicki’s love enough to save Norman from himself?

If I made a list of the best classic movies about Hollywood, this would be at the top, right up there with “Sunset Boulevard” (1950) and “Singin’ in the Rain” (1952). That’s one reason why I particularly wanted to see it during the TCMFF. It fit the weekend’s Old Hollywood theme perfectly! When Esther arrives in Hollywood, we see her exploring famous landmarks, like the footprints at Grauman’s Chinese Theatre. In the background, you can see the marquis of the Roosevelt Hotel, where I stayed for the weekend. Although I think it would have been great if this film had been screened at Grauman’s, since the theater’s exterior is shown during the movie, it was a wonderful experience to watch it in the lesser known but equally historic Legion Theater.

Another scene was filmed at a real Hollywood location on a less famous corner of Hollywood Boulevard, several blocks east. The building itself is not a landmark, but it contained some of the most important organizations in the Hollywood production system. I refer to the Hollywood Western building, the third floor of which housed Central Casting. When Esther first arrives in Hollywood, she goes to Central Casting, where she learns the harsh statistics of extra employment: 12,416 registered actors compete for 800 roles per day. Esther is undiscouraged by watching the dozens of switchboard operators telling fellow hopefuls that there are no available parts. This scene was filmed in the actual Central Casting office of the Hollywood Western Building.

After filming the Central Casting scene, Selznick and Wellman may have headed to the building’s fourth floor to discuss some of the film’s more difficult topics. You see, the Hollywood Western Building was also the location of the Production Code Administration (PCA), another branch of the Motion Picture Producers and Distributors of America. Whereas Central Casting ensured that movie extras were treated fairly, the PCA ensured that movies passed moral muster for American audiences and would meet the general approval of censor boards around the world. When the PCA was established in July 1934, it had one task: to help filmmakers follow the guidelines of the Motion Picture Production Code, often erroneously called the Hays Code, so their movies would be eligible for Seals of Approval. I wager most of the conversation with the PCA regarding this film was about (SPOILER) Norman’s suicide near the end.

Many people think that the Code expressly forbade the depiction of suicide. Interestingly, suicide was not mentioned in the original text of the Code from 1930, which was written by Martin J. Quigley and Father Daniel A. Lord. However, some of the rules presented in Section I, Crimes Against the Law, apply to a character taking his own life as well as taking another’s:

a. The technique of murder must be presented in a way that will not inspire imitation.

b. Brutal killings are not to be presented in detail.

If you substitute the words “murder” and “killing” with “suicide” in the above clause, the basic rules for the depiction of suicide are covered. Suicides should never inspire imitation, particularly by presenting new techniques, and they must not be presented in brutal detail.

In 1938, an addition entitled “Special Regulations on Crime in Motion Pictures” was added to the Code. Its fifth clause specifically dealt with suicide:

In 1951, one more sentence was added to the end of this clause:

It should never be justified or glorified or used to defeat the due process of law.

As you can see, this small addition in 1951 was made to clarify and strengthen the Code’s stance on this point.

When the PCA was formed in 1934, human life became much more sacred in films. Murders, gangland violence, and suicide decreased considerably. In the aforementioned Special Regulations on Crime from 1938, the following note about murders is made:

4. Because of the increase in the number of films in which murder is frequently committed, action showing the taking of human life, even in the mystery stories, is to be cut to the minimum. These frequent presentations of murder tend to lessen regard for the sacredness of life.

Even if this life is self-taken, they didn’t want audiences to get too comfortable with the idea of human death, since it hardens them in real life.

How does the suicide in “A Star is Born” measure up to Code standards? Having been released in 1937, this film was made before the addendums specifically addressing suicide were added to the Code, yet the spirit of the PCA remained the same. Norman drowns himself in the ocean, which is neither inventive nor new. The depiction is certainly not brutal or gory, since the last thing we see is his swimming away from the shore. His death is necessary for plot development, but I don’t think it is justified or glorified. In fact, it is not certain that his death was intentional. His plan to do away with himself is implied by his expression when he overhears Vicki planning to give up her career to rehabilitate him; then, he gazes toward the ocean with resolve. His death is reported as accidental, and it could have been. If he did purposely kill himself, he nobly gave his life so Vicki could keep living hers without his burdening her. However, the audience doesn’t feel that he did the right thing, since Norman’s death almost destroys Vicki. Although the action was motivated by love, suicide is never the right decision.

Norman’s suicide is part of an overarching theme in this film: For your dreams to come true, you must pay with heartbreak. Vicki finds fame, success, wealth, and love in Hollywood, but she pays the price with personal suffering, since she is unable to save Norman from himself, even though they love each other deeply. There is also an important lesson in Norman’s story. When he is on top, he is arrogant, rude, and irresponsible. He is wildly successful and thinks he always will be. He expects his producer and press agent to keep his escapades out of the headlines, preserving his image. He doesn’t think he should act like a responsible person until he discovers it’s too late to salvage his career.

This sounds like pretty heavy stuff, but the film superbly intersperses moments of comedy to keep the tone light. It’s fun, funny, sentimental, touching, heartbreaking, and inspiring all at once. It was very exciting to watch this movie at the end of the first night of the TCMFF, right there in Hollywood where it was made eighty-five years ago. In a beautifully restored print, the Technicolor cinematography never looked lovelier. If you want to see an example of a film which brilliantly handles controversial, mature topics like alcoholism, suicide, and the price of fame, all while remaining appropriate for any age, watch the 1937 “A Star is Born.” It didn’t even need musical numbers to be a masterpiece!