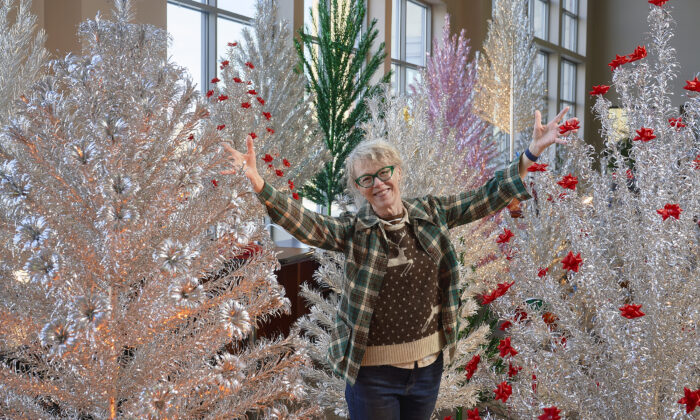 Barbara Bundy-Jost stands in a forest of Evergleam Christmas trees at the Manitowoc Public Library on Dec. 6, 2021. (Chris Duzynski/The Epoch Times)
US Features

Sparkling Forest From Christmases Past Lights Up Wisconsin Town

MANITOWOC, Wis.—Standing in the softly falling snow, staring at the colorful and brightly lit Christmas display, Barbara Bundy-Jost understood that there was just something special about that tree.

“It was just lit up like a sparkling forest,” she said. “We were on our way one Christmas Eve to visit my mother, who lived overlooking the lake on Fourth Street. We always turned on that street. We stopped the car. The snow was softly falling. We let the kids out, and we all stood in the window, and we talked about the tree that my grandmother had.”

That tree was unlike most tannenbaums displayed in millions of homes throughout the country for Christmas. It was an aluminum tree, the artful product of Manitowoc, Wisconsin’s rich manufacturing past, now on display in a store window. Its presence that night was like a welcoming lighthouse, beckoning ships to port. Over the next two decades, the aluminum tree again took its place of honor among Christmas traditions, one that the city of roughly 35,000 people celebrates with panache each December.

Whenever she thinks of aluminum trees, Bundy-Jost remembers her grandmother, Ella (Mulloy) Herzog, a feisty Irishwoman with an affinity for the Evergleam trees made in Manitowoc. She proudly displayed a four-foot Evergleam, fountain style, in her front window. It stood right next to Grandpa Reine’s easy chair.

Bundy-Jost said she can almost see Ella’s little dog, Benny, sitting in the chair, basking in the Christmas glow.

“We went there for one Christmas. I was just a kid,” Bundy-Jost told The Epoch Times. “It had to be the mid-’60s, and there was a four-foot fountain with the big red balls on it. My mother [Kathie] is like, ‘What is that?’ I just sat there staring at the sparkle, and my Mom said, ‘Never. We’re never getting one of those.’ And I really wanted one.”

Revenge of the Trees: 70 and Counting

The family never got an aluminum tree. For young Bundy-Jost and her four siblings, the tradition was to tromp into a nearby forest with her father, Selmer A. “Sam” Bundy, in search of a Norwegian pine tree.

“My mother wanted one cut in the forest. He would take us all out,” she said. “I don’t like being cold—I never did. I hated every minute of it. But the tree always smelled good. It looked good in the beginning.”

Bundy-Jost’s home just south of Manitowoc, a cream city brick farmhouse, is decorated with Evergleam trees, which were made by the Aluminum Specialty Co. from 1960 until the early 1970s. She has plenty—70 at last count—from which to choose. Whatever her childhood might have lacked in aluminum ornamentation, she has made up for it in adulthood. For a growing cadre of holiday lovers across the United States, it’s just not Christmas without aluminum.

“I love the ‘littles.’ I call them the littles. I love the two-footers,” she said. “I have a pink one. I have a gold one. I have so many silver ones. I really would like—it’s called a two-foot blue frost. It’s got the little blue tip on it.”

Bundy-Jost and her brother each put up a four-footer each year in honor of their Grandma Ella.

What does a person do with 70 Christmas trees? You put them on display at the Manitowoc Public Library and in the storefronts of more than three dozen downtown businesses. The annual “Evergleams on Eighth” festival features about 200 silver and multi-colored aluminum trees, borrowed from the prized collections of several Evergleam devotees. What started as an experiment in 2015 is now a widely anticipated event that draws window shoppers from as far away as Minneapolis and Chicago.

“They come from all over. They love it,” said Bundy-Jost, who serves as Evergleam ambassador at library events and trolley tours that run on Saturdays. “The nostalgia that goes with it, the simpler times, and the happiness that these generate is profound.”

To the outside world, Manitowoc is known for giant construction cranes with bright red cabs, for World War II shipbuilding for the U.S. military, and more recently, for building luxury yachts. The city has long been home to a deep-water port on the western shore of Lake Michigan, about 40 miles southeast of Green Bay. The famous coal-fired ferry, the SS Badger, has been crisscrossing the lake to Ludington, Michigan, since 1953. Manitowoc gained fame for a 20-pound chunk of the Soviet Sputnik IV spacecraft that crashed into North Eighth Street on Sept. 5, 1962.

Now, it’s known once again as the home of metallic Christmas decor.

“It’s just such a unique story and they’re so pretty. They sparkle so nice,” Cathy Karl, proprietor of the Heart & Homestead store on South Eighth Street, told The Epoch Times. “And then when you learn there are so many different kinds, when you see, for instance, the display at the library, how many different kinds there are from that same company, it’s kind of a remarkable story.”

To be fair, Manitowoc was once home to three companies that made Christmas decorations. The oldest was National Tinsel Co., maker of the silvery strands that are draped over Christmas tree branches to give the Christmas lights extra sparkle. The Mirro Aluminum Co. was once the world’s largest manufacturer of aluminum kitchen utensils. Mirro had its own Christmas tree line and made gifts, including a tree-shaped aluminum lamp with Christmas shapes punched into the metal shade. The third manufacturer, Aluminum Specialty Co., didn’t invent the aluminum Christmas tree, but it was the preeminent company to mass market the metallic marvels.

The story started when Tom Gannon, vice president of Specialty, was shown an aluminum tree made by Modern Coatings in Chicago as a store fixture for retail giants such as Ben Franklin. Gannon loved the tree, but it was bulky with a price tag that was out of reach for most Americans. Gannon took a branch from the tree, believing his company could engineer its own Christmas tree that was light and affordable. Engineers for Specialty, including Richard Thomsen and Wesley Martin, had a prototype ready for the 1959 New York toy show. The introduction came with mixed reviews until a buyer from Minneapolis put down a $50,000 order. Evergleam took off from there.

After a customer-requested redesign after year one, Evergleam began to blossom into a wide range of sizes, branch counts, and colors. Silver was the dominant finish, but there were also pink, blue frost, gold, a double-sided blue-green, and, rarest of all, burgundy-blue. Only one pink tree was made for every 10,000 silver trees.

Some Evergleams were sold with a rotating base that spun the tree like a music-box ballerina. A color wheel projected light through gel films to cast hues of green, red, and blue that made the tree gleam from the inside. Some Evergleams were packaged with glass ornaments. A meatpacker gave them away with canned hams. Booming sales showed that the space age of the 1960s could drive a new product line to more than 1 million units over a decade.

In the early years, Specialty moved to year-round production, sometimes with three shifts per day. Production employees were often women who worked outside of the home after family dinner hour or wanted to save money for education or Christmas gifts. The long shifts gluing and assembling could be monotonous, so workers made up an anthem, sung as a way to stay awake in the wee hours. It was sung to the tune of “Glow Worm,” perhaps most remembered for the 1952 version popularized by the Mills Brothers.

“You know, it’s 2 o’clock in the morning, your hands are burning, you’re cut, and you’re tired,” Bundy-Jost said. “You have to stay awake, so they came up with this song. These are wonderful memories.”

‘They Come from All Over the Place’

Karl was president of the downtown association when the Evergleam festival first started. She was among the skeptics when collector Steve Siehr first pitched the idea.

“I was a total aluminum tree virgin at that time,” she said. “I didn’t grow up here and I didn’t know anything about them. I just figured, ‘I don’t see why anybody would want to see that same tree over and over and over again in every window.’ I had no idea there were so many varieties.”

With a grant from the City of Manitowoc, local businesses advertise the Evergleam events in urban centers. A recent listing in a newspaper’s “10 best things about Christmas in Wisconsin” got a huge response.

“It really increases walk-in traffic,” Karl said. “This past weekend, we had people from West Bend, Green Bay, and surrounding areas, from Chicago, Milwaukee. They come from all over the place: Wausau, places north. There were people from Tripoli.”

Despite the 1960s faddishness that some have described as kitsch, Evergleam collectors see the trees as wonderful artistic expression.

“I think of them as pieces of art. I see them as a sculpture,” Jordan Kabat, a Manitowoc native and the newest member of team Evergleam, told The Epoch Times. “It’s like a human representation of a natural object. The reflection of light on it and its form is really very artistic. That is something that really attracts me to it. Even though they were mass-produced, their form is still something that I see as art.”

Kabat’s contribution to the tree tour includes 37 Evergleam trees arranged in the windows of the historic Riverbank building on Jay Street. The edifice most recently housed a martini bar, but dates back to 1901, when it was the German American Bank. The building is on the National Register of Historic Places. Its style and form seem to go well with the artistic display of illuminated aluminum trees.

“After I started to collect and get increasingly interested in this, I wanted to get involved with this event and help out with it,” said Kabat, who inherited a small Evergleam from his grandmother.

For Karl and Bundy-Jost, Kabat represents the next generation to carry on the Evergleam story. Bundy-Jost even suggested establishing an aluminum museum in the building, owned by Kabat’s extended family. His response: “Talk to my in-laws.”

For Bundy-Jost, it’s important for the Christmas tree story to live on, to honor a simpler time filled with promise.

“They are so very different,” she said. “At the time, it represented a whole new world. We were the atomic age. We had people going to the moon. We had space travel. We had the space race. So I think it represents a modern sensibility and a new perspective, prosperity for our country.”

Correction: a previous version article included an incorrect name for a type of pine tree from an interviewee’s childhood memory.