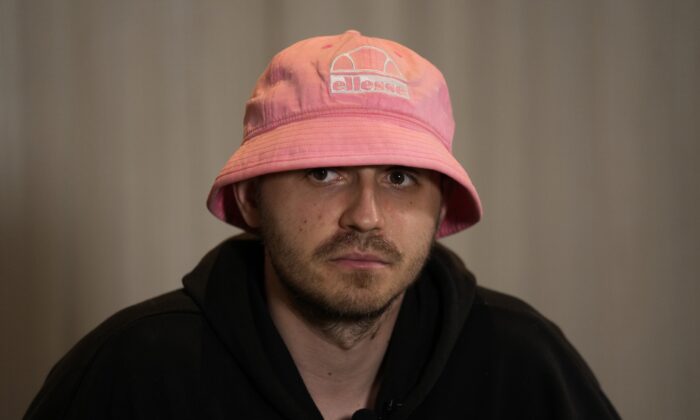 Oleh Psiuk, frontman of Ukraine's Kalush Orchestra, during an interview in Turin, Italy, on May 5, 2022. (Antonio Calanni/AP Photo)
Entertainment News

TURIN, Italy—Ukrainian band Kalush Orchestra’s upbeat, melodic entry for this month’s Eurovision Song Contest was written as a tribute to the frontman’s mother.

Since the Russian invasion of Ukraine, it has become an anthem to the war-ravaged motherland.

“Stefania” is the most-watched song on YouTube among the 35 national entries that are slated to compete when the Eurovision contest takes place this week in Turin, an industrial city in northern Italy.

While some oddsmakers and data analysts have predicted other contestants will win, the song by Kalush Orchestra is quickly becoming a sentimental favorite.

“I’ll always find my way home, even if all roads are destroyed,’’ Kalush Orchestra frontman Oleh Psiuk wrote in the lyrics for “Stefania.”

His words have become more poignant as missiles pound Ukrainian cities and villages, forcing over 11 million to flee since Russia invaded the country.

“Indeed, some stuff in here was written long before the war, and it was dedicated to my mother,’’ Psiuk told The Associated Press at his hotel in Turin.

“After it all started with the war and the hostilities, it took on additional meaning, and many people started seeing it as their mother, Ukraine, in the meaning of the country. It has become really close to the hearts of so many people in Ukraine,” said the songwriter, who wore a bright bucket hat that would make him instantly recognizable to anyone who has streamed “Stefania.”

“We ourselves show that Ukrainian culture and Ukrainian ethnic code exists,’’ Psuik said. “Our purpose is to make Ukrainian music popular, not only in Ukraine but all over Europe. And Eurovision is the best platform for that.”

Psiuk and five bandmates, all men between the ages of 21 to 35, received special permission from Ukrainian authorities to travel to Turin to participate in Eurovision, traveling by land to Poland and then flying to Italy. One original band member stayed behind to fight.

Psiuk, 27, left behind a network of volunteers he organized two days into the war to help mete out logistical help to people across Ukraine seeking shelter or transport.

All will return to Ukraine when the song contest finishes.

“We feel a big responsibility,’’ Psiuk said. “It’s very important for us to be as useful to the country as possible. We want to represent our country decently.”

After Russia’s Feb. 24 invasion of Ukraine, Russia’s entry to the Eurovision was kicked out of the contest in a move organizers said aimed to keep politics out of the hugely popular event, which was viewed last year by 183 million people.

Ukraine first joined the Eurovision Song Contest 19 years ago. It has won twice since, both times with songs performed primarily in Ukrainian: by Ruslana in 2004 and Jamala in 2016.

Psuik attributes Ukraine’s success to “the peculiar character that our music has.”

“I really hope that after we perform it at the Eurovision Song Contest, Ukrainian music will be even more popular and heard,’’ Psiuk said.