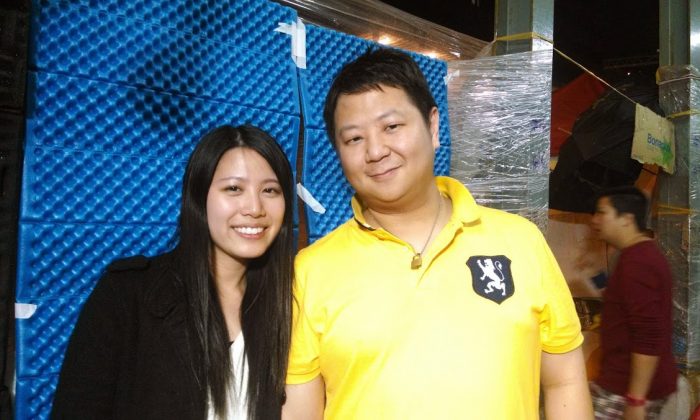 Songwriters Anita Chung and Samson Ling stand in the makeshift sound studio used to record the pro-democracy student leaders singing their song “The People Under the Umbrellas” on Nov. 14. (Matthew Robertson/Epoch Times)
China

HONG KONG—The spontaneous “umbrella movement” that has taken over streets in this city is just about two months old, and there is a general fatigue setting in among some quarters. Sleeping in tents on asphalt roads, after all, loses its novelty rather quickly.

Two singer-songwriters, Samson Ling and Anita Chung, a couple, are aiming to encourage and comfort the protesters with a music video and performances of a song they wrote back in September: “The People Under the Umbrellas.”

On a recent evening at Admiralty, the main occupied zone in Hong Kong, the couple organized a number of the well-known student leaders to sing the song, which they will use for an upcoming music video. Their friend, Taft Tsui, an artist and organizer of live performances, also quickly pulled together a live performance (with encores) involving dozens of protesters who learnt the song on the day.

Prefacing her remarks with the ubiquitous disclosure that she does not really concern herself with politics, Anita Chung, a lyricist who had a hand in the song’s composition, said: “Basically the song is about how we’re all gathering together here because the government is not listening to our voice.”

She continued: “We don’t want to do this, but there’s nothing else we can do—that’s why we’re here.”

Samson Ling, her partner and the primary composer of the song, added that “We didn’t really care much about the protests until the 28th.”

Sept. 28 is when the Hong Kong police fired 87 canisters of tear gas into protesting crowds. It served to temporarily disperse the crowd, but the same night tens of thousands of people, shocked and furious at the government, took over the 12-lane highway outside government offices that they now call Umbrella Square.

The “Umbrella Movement,” as it has come to be called, is a grassroots social movement calling for greater democracy in Hong Kong—specifically, the right for Hong Kong people to freely elect their chief executive, free of the meddling from Beijing that the Chinese Communist Party currently insists upon.

“A few days after seeing the injustice, we decided to write a song. We dug out a melody that I made a couple of weeks ago,” Ling said.

Despite the complexity of the lyrics, Chung says that the protesters “actually liked it. They learned it pretty quickly.”

Ling originally simply wrote it for himself. “It wasn’t something that people could learn easily. There are a lot of complicated rhymes. I’m surprised they sung it so well.”

Here is a performance of the song; English language lyrics appear below.

The new music video, featuring the student leaders, is expected to be online over the next few weeks.

The People Under the Umbrellas

Let us wake up from our sweet dreams
The reality is not as perfect as it seemed
We just wanna be heard, but our words are drowned
If he would just listen, who would want to stand up and rebel?

This is a place we’re proud to call our home
We won’t abandon it just because it’s falling apart
Fear and anxiety are causing more tears in our eyes than the tear bombs that were thrown at us
Even the flowers are blossoming, empathizing with this chaotic world

*With the will of surviving, we are occupying this place with dignity
They can’t take away what we know and believe in
We’ll persist to stand against injustice
After the days and nights, we are still not backing off
With umbrellas in our hands, we defend our beliefs
After we’ve exhausted everything, we replenish and continue to light up our vain hope *

Under our umbrellas, we might want to cry
We might be furious, we might be afraid
We guard the streets and sow the seeds of hope
Together, we stand up to face the world’s imperfection

We are not here to fight with force
We summon our courage to shield ourselves against attacks, just because we want our voices to be heard

We all share the same roots, who wouldn’t want to leave here safe and unhurt?
If we are living in a harmonious era, why would we need to use a fragile umbrella to defend ourselves against this raging war?
After the days and nights, we are still not backing off
Even God can hear us
Even if we lose in the end, we’ll have no regrets because we fought peacefully until the last minute.