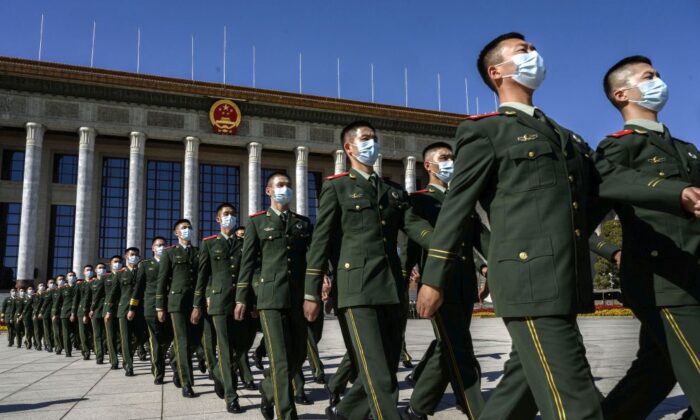 People's Liberation Army soldiers march after a ceremony at the Great Hall of the People in Beijing on Oct. 23, 2020. (Kevin Frayer/Getty Images)
Viewpoints

A Solution to the China Problem

Finally, we are acknowledging that China is a problem. Unfortunately, a pandemic and far too many deaths were required to force us to confront this reality. For too long, it was naively hoped “that support for China’s rise and for its integration into the post-war international order would liberalize China.” Sadly, nothing of the sort has happened.

While many now acknowledge this growing threat, nobody appears to have a viable solution. Here is a preliminary framework for such a solution:

The United Nations has failed to promote peace and democracy, because it is incapable of doing so and we must learn from this. The U.N.’s inherent flaw is that it treats all governments as equals and thereby does not value a democracy over a dictatorship. It is outrageous that Saudi Arabia is as likely to be a member on the U.N. committees for human rights or women’s rights as Australia, Germany, or Canada. Such an organization is hopelessly beyond repair.

To add insult to injury, China, and Russia, the two biggest obstacles to the spread of global peace and democracy each have a veto on the Security Council!

The answer must be the opposite of the U.N., but no such organization currently exists. Therefore, we require a new international organization which does value freedom and democracy. For now, let us call it the United Democratic Nations (UDN).

The UDN will build on the strengths and weaknesses of the U.N., NATO, and the G7, and it must therefore be values-based and hierarchical. Membership must be based on genuine adherence to and promotion of freedom and democracy. Leading democracies will enjoy more influence and benefits, but any country can earn membership and increase their standing. As member countries increase their standing via demonstrated commitment to and promotion of the values which this new organization will be founded on, they will acquire more benefits such as voting rights, increased decision-making, the privilege of being on committees, access to better military equipment and better trade deals, etc.

Indeed, all countries will either be encouraged to earn their membership, or if they are already members then to increase their standing within the UDN and thereby earn more benefits. Member countries which behave inconsistently with the founding principles will have their status degraded or terminated.

In terms of creating a matrix to judge and rank the members, there is no need to reinvent the wheel. Freedom House already has a rigorous classification system which annually ranks virtually all the countries in the world based on freedom related criteria. Of the world’s 20 largest economies, 14 of them are “Free”, 2 of them are “Partly Free” and 4 are “Not Free,” including China and Russia. This provides a functional matrix to start with.

I suggest the headquarters for the UDN be located as close as practicable to Runnymede in the United Kingdom, which is where Magna Carta was signed in 1215; or at least in proximity to a site with massive historic significance to the evolution of democracy.

The first order of business will be to emancipate the 1.4 billion souls in China. To clarify, China is not the problem but rather the Chinese Communist Party (CCP) is.  There are ample people in China who yearn for freedom and democracy, and they deserve our support.

Liberating the Chinese people will be accomplished by all member countries of the UDN acting together and levying an escalating “freedom” tariff on all goods imported from China, with additional sanctions being imposed after 5 years if necessary. Presently, there is zero coordination within the free world as there is no forum for democracies to convene. Predictably, the CCP is exploiting this to their tremendous advantage with a divide-and-conquer approach. One-hundred percent of the funds derived from the freedom tariff are to be directed toward liberating the Chinese people.

The CCP must be singled out and dictator Xi Xinping must feel the full weight of the free world bearing down on him. The united free world must make the CCP an offer it cannot refuse. The choice for the CCP must be either escalating economic pressure like an ever-tightening vice-grip and suffocating isolation from the free world, or commence down the path toward freedom and democracy.

Once China starts this journey, mentorship and support must be provided to guide it toward freedom. When China completes this journey, has earned membership in the UDN, and joins the vital mission to spread peace and freedom via democracy around the world, then the rate of democratization will accelerate dramatically.

Just imagine the world exactly as it is, except that China is a thriving democracy and fiercely committed to global human rights. That is a world worth fighting for!

After China, the next domino must be Russia, then Saudi Arabia. When the UDN establishes its bona fides, electoral candidates in countries which are “Partly Free” will campaign on either acquiring membership in the UDN for their country or increasing their standing in the UDN to access more of the UDN’s privileges. This will accelerate the spread of good governance in Africa, for example, where they have elections but corruption is rampant. In time, people will demand membership of their country in the UDN, then increased clout in the UDN and they will vote accordingly.

What we’ve been doing is not working. Freedom, peace and democracy are not spreading around the world, and so we must move in a bold new direction. Unless there are carrots and sticks encouraging democratization and discouraging authoritarianism, nothing will change. However, if the free world embraces these ideas, then within 50 years the entire planet will be fully democratized and all human beings living in peace and freedom as we all deserve.

Thank you for your consideration of the above. Should any of this be of interest and if you wish, I would be most pleased to hear from you or your delegate to further discuss.