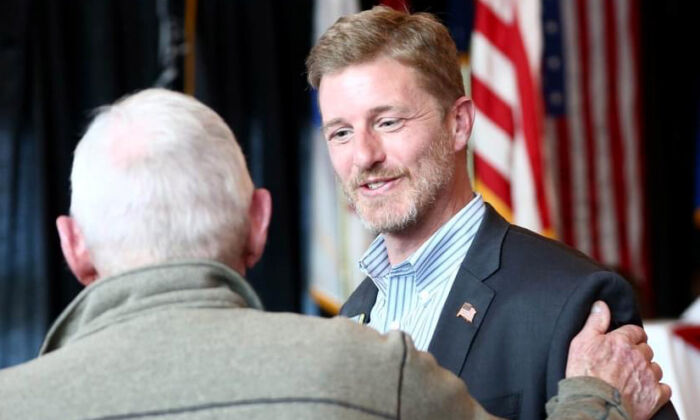 On Nov. 8, some Colorado voters will have a choice between political newcomer Erik Aadland, a Republican, or Democratic state Sen. Brittany Pettersen to represent the state’s 7th District in Congress.

The retirement of longtime Democratic Rep. Ed Perlmutter, plus Colorado’s redistricting process last year, has remade a once solidly blue district into a more competitive arena.

Republicans need a net gain of five seats to regain a majority in the House, but conversely, Democrats only need to hold that same number to retain power. As such, races such as in the 7th District are high stakes for Republicans and Democrats.

On June 28, Republicans in the district’s primary chose Aadland, who received 48 percent of the vote, defeating Tim Reichert (36 percent), and Laurel Imer (16 percent). Meanwhile, Pettersen didn’t have a primary challenger, guaranteeing her spot as the Democratic nominee for the general election.

Now, they are bringing opposing policies and ideas on how best to represent the district.

While Aadland may be a political newcomer, that doesn’t mean he’s inexperienced with serving people. Aadland was born into an Army family, the son of retired Maj. Gen. Anders and Sandra Aadland. Moving more than 21 times, Aadland saw the world and decided that he, too, wanted to serve his country.

In 2002, Aadland began his career as an Army officer after graduating from West Point. He served combat tours in Iraq and Afghanistan, and received two Bronze Stars for his service. He says that, if elected, his experiences as a soldier will inform how he serves in Congress.

“I’m focused on service to the nation, just as I was when I swore an oath as an Army officer upon graduation from West Point,” he told The Epoch Times. “I will serve the people of Colorado by upholding constitutional principles.”

Pettersen was born in Colorado and has lived in Jefferson County for almost her entire life. According to her campaign website, watching her mother deal with an addiction to prescription drugs shaped her childhood.

She says that despite the challenges she faced at home, access to “great public schools and teachers that believed in me” led her to become the first member of her family to graduate from high school and college. Upon graduating, Pettersen began her service to Colorado as a state legislator.

Aadland and Pettersen both view the 2022 race as defining for the nation, but for vastly different reasons.

Aadland believes that a corrupt establishment imperils the future of the United States, and in his view, the “best government” stays out of the way of its citizenry. He plans to pursue policy to “make that a reality.”

“Coloradans need to know that their representative does not view the federal government as a social experiment meant to micromanage their lives, nor do they view the Constitution as an inconvenience,” he told The Epoch Times.

Once he reaches D.C., he plans to ensure that Congress is adhering to the Constitution and will push back against the “radical leftist agendas of social engineering and limited opportunity for the politically disfavored.”

Conversely, Pettersen says income inequality and the climate crisis are “threatening the very fabric of our democracy” and proposes government action as the solution. According to her website, she plans to introduce legislation to deal with those concerns.

Regarding policy priorities, Aadland puts protecting the U.S.–Mexico border high on his list. Specifically, he told The Epoch Times he wants the United States to “follow the laws and ideas that have already proven successful.”

“Finish the wall. Reinstate the stay-in-Mexico policy. Put America first in our relations with Mexico and Central American countries.”

He also wants to “tie trade and aid to actions taken to end the power of cartels,” expand funding and support for border patrol, and immediately deport illegal immigrants convicted of a felony—regardless of whether it is their first offense.

Finally, he wants federal and state agencies to cooperate toward ending “sanctuary cities.”

Pettersen doesn’t list the southern border as a priority on her campaign website or explain how she would handle immigration. However, on Sept. 8, 2021, she was one of three dozen Colorado officials, along with 700 Democratic policymakers across the country, to sign a letter urging the Biden administration to loosen immigration rules.

She also doesn’t list on her website her position on hot-topic issues such as defunding the police or abortion; she didn’t respond by press time to a request by The Epoch Times for comment on those or other issues.

Aadland says he thinks Pettersen will be a “reliable vote” for her “radical friends” in Congress if elected. He listed Rep. Alexandria Ocasio-Cortez (D-N.Y.), “the Squad,” and Rep. Nancy Pelosi (D-Calif.) as those to whom Pettersen would defer.

Thus, in the event of measures to open the southern border, defund the police, or expand abortion access, Aadland believes Pettersen will support that initiative instead of putting Coloradans’ safety and needs first. He contrasted that with how he would behave if elected.

“Attempts to ‘defund the police’ are appalling to me,” he said.

“Soft-on-crime policies such as no-cash bail, significant sentence reduction … I will stand against any diversion of federal dollars intended to dismantle police forces or implement socialist ideas in the justice system.

“I will speak out against abortion and the taking of human life. It’s important to remind everyone that at the conclusion of an abortion a human being is intentionally killed.”

Aadland agrees with the Supreme Court’s recent decision that abortion is a state issue.

Before 2021 redistricting, the 7th District encompassed portions of Adams, Jefferson, and Arapahoe counties. Now, it borders Broomfield County in the north, Chaffee and Lake counties in the west, and Custer County in the south.

That means the district includes Park, Fremont, and Teller counties, all of which have more active GOP voters than active Democratic voters, according to 2022 Voter Registration Statistics.