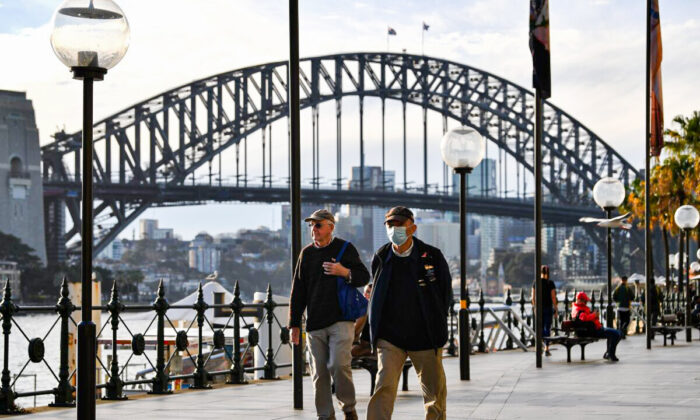 A man wearing a face mask walks before the Harbour Bridge in Sydney, NSW, Australia on July 22, 2020. (Saeed Khan/AFP via Getty Images)
Viewpoints

A Soft Landing for the Australian Economy?

The economic news of the last couple of weeks in Australia is bleak at best and demoralising at worst. The skyrocketing prices of energy, meat, vegetables, and petrol have led to big increases in the cost of living.

Australia is now experiencing a serious cost-of-living crisis. Prices are increasing much faster than wages, which are not much higher than in 2013. It is especially tough for Western Australians, where inflation in the state reached almost six percent while wages only grew at two percent.

In addition to the substantial increase in the price of groceries and petrol, the cost of energy has now become prohibitively high. In July, electricity bills are expected to increase by 18.3 percent in New South Wales (NSW), 12.6 percent in Queensland and 9.5 percent in South Australia (SA), slugging consumers with an extra $250 a year in some cases.

The recent chaos in the national electricity market has been unprecedented. The potential for mass blackouts in Australia has considerably increased with about 1,800 megawatts (MW) of coal-fired power not operating in Queensland and 1,200 MW of capacity offline in NSW, Victoria, SA, and Tasmania. Hospitals have been ordered to reduce electricity use, and millions of Australians are urged not to use basic appliances despite the chilly winter weather.

A Net-Zero Push During an Energy Crisis

The present energy crisis is the culmination of a global gas shortage, high coal prices and ageing coal-fired power stations, as well as an irresponsible transition to unreliable renewable energy.

And in the midst of a serious energy crisis and the soaring cost of living, Prime Minister Anthony Albanese announced that Australia has to achieve net-zero emissions by 2050. Speaking online on June 17 at a global economic forum convened by U.S. President Joe Biden, the prime minister told other leaders that he will make sure Australia becomes a “clean energy superpower” regardless of the costs involved. He said the move would see 82 percent of Australia’s National Energy market coming from renewable sources by the end of this decade.

Albanese’s promise is a recipe for disaster, and it certainly increases the possibility of massive blackouts in the near future. Such a possibility has already provoked an economic malaise in Australia and, indeed, throughout the Western world. In the United States, for example, the American Federal Reserve raised the cash rate by 0.75 percentage points, the largest increase in 28 years.

The Reserve Bank of Australia also lifted the cash rate by half a percentage point to 0.85 percent and predicted an inflation rate of 5.1 percent. The Reserve Bank’s Governor, Philip Lowe, warned that more increases in the cash rate are coming until inflation starts to fall within its two to three percent target range. If, as expected, the commercial banks pass on the cash rate to consumers, borrowers would need to fork out more for their mortgage, car loan, or credit card bills.

The Reserve Bank is motivated by its desire to fight the soaring inflation hitting Australia. Of course, raising the cash rate is always a risky business because, as people pay more for their bank borrowings, there is less money to spend on consumer goods and, hence, demand for these goods will slow.

This, in turn, might lead to stagflation or even a recession. Indeed, there is speculation that the determination of the central bank to aggressively fight spiralling inflation will detrimentally affect economic growth and raise the spectre of a recession during the first half of next year.

Inflation is also fuelled by the COVID-19 pandemic in that it has caused an imbalance between the supply and demand for goods. Specifically, supply issues have affected the availability and transportation of building materials and slowed the distribution of food products.

The diversion of weapons and the provision of aid to Ukraine has also contributed to the supply chain disruption, and the West’s stifling sanctions on Russia have slowed down the recovery of the sluggish economy. And the continuing lockdown madness in China and its aggressive stance toward the West and Taiwan, indicative of an attempt at world domination, too have disrupted the supply chain.

The bleak economic outlook is also evidenced by the decrease in the value of people’s share portfolios. The value of shares, including the blue-stock shares, has plummeted to worrying depths. For example, shares in the Commonwealth Bank went from $106.71 (US$74) on June 1 to $87.26 on June 17. The same fate befell shares in retail stores and mining shares that people would have bought in the expectation that it would provide an income in their twilight years.

The increase in the cash rate, however, is not necessarily all unwelcome news. Although these are challenging times, especially for younger people who want to buy their first home and have to repay a bank loan, those with interest-bearing deposits will benefit, since the interest earned on deposits may increase, from practically zero to possibly 3.5 percent, or higher.

One can still remember a time, not so long ago when pensioners used interest earned on deposits to beef up their income—a strategy that failed when interest rates decreased to almost zero. At least, for them, there will be a little bit of respite.

Of course, Australia is in this mess, mainly because of the incompetence of its politicians. The disproportionate destruction of small businesses caused by draconian COVID-19 measures is demonstrated by their ongoing heavy reliance on government support for survival.

Is Our Economy Revivable?

The legacy of excessive intervention in our daily lives is now a more fragmented society and a fragile economy dominated by large conglomerates with local communities being stripped of the small businesses that once were integral to their character.

Mark Twain once quipped: “No man’s life, liberty, or property are safe while the legislature is in session.” From an Australian perspective, this statement is a perfect reflection of reality.

The challenge now is to contain inflationary forces, by improving the supply chain while sustaining post-pandemic economic expansion. Of course, this also requires more tax reductions and other measures to stimulate the economy and reduce the size of the inefficient state.

Will there be a soft landing for the Australian economy?