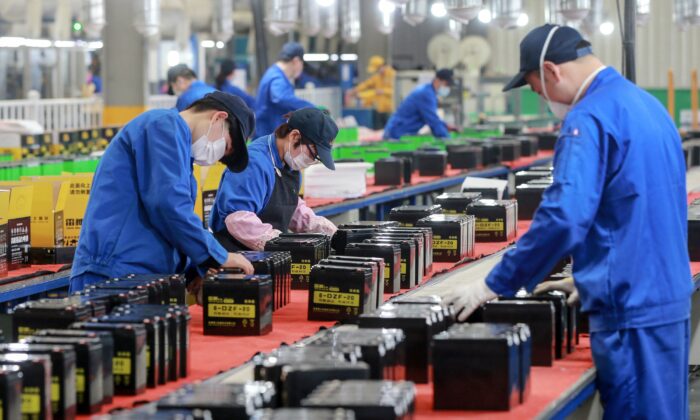 Employees working on a battery production line at a factory in Huaibei in China's eastern Anhui Province on March 30, 2020. (STR/AFP via Getty Images)
US News

WASHINGTON—The COVID-19 pandemic is going to have serious implications for how businesses think about China. Souring sentiment against the Chinese communist regime over the past few weeks may force many corporate boards to alter their whole supply chains in a very short time.

There will be a “forced decoupling” from China, meaning cutting off economic ties for national and strategic reasons, according to Kyle Bass, hedge fund manager and founder of Hayman Capital Management.

“The misery that China has brought to the rest of the world with this virus has really been shining a disinfecting light on global supply chains,” Bass said, in an interview for The Epoch Times’ “American Thought Leaders” program.

“Think about this, we have Western democracies relying almost completely on a supply chain in a totalitarian, communistic nation. It’s actually insane when you lay it out like that.”

If there’s a silver lining to this pandemic, Bass notes, it will be the acceleration of the decoupling.

According to a survey in March conducted by the American Chamber of Commerce and consulting firm PwC, one in five large American companies operating in China reports that coronavirus will speed up the process of decoupling. They now indicate greater potential for economic decoupling between the two countries compared to a similar survey in 2019.

More than 40 percent of the respondents, however, still believe that it would be impossible to cut economic ties with China.

“Can you imagine if you explain to someone that you’re doing business with a regime that has more than a million prisoners of conscience locked up, and it is executing live organ harvesting on this population of political prisoners on a daily basis? And yet people like Blackstone can’t wait to invest another dollar in China. People like Sheldon Adelson can’t wait to open another casino in Macau,” Bass said.

“Because they just let money blind them to the blatant human rights abuses of maybe one of the most tyrannical regimes that have ever lived. It’s crazy.”

Public opinion in the United States has shifted significantly against the Chinese regime in recent weeks, as most people blame the CCP for covering up the origin of the virus and withholding information about the scope of the outbreak in the Chinese city of Wuhan.

According to a Harris Poll survey conducted from March 14 to April 5, 72 percent of Americans blame the Chinese government for inaccurately reporting the impact of the virus in China.

Another survey by Pew Research Center in March found that roughly two-thirds of Americans now have an unfavorable view of China.

A growing number of legislators in the United States, the UK, Australia, and Canada have started talking about “reparations and getting the Chinese government to pay for their malign actions,” Bass said.

He noted that think tanks and law professors have already floated the idea of legal and financial liability of China for the outbreak.

“There are plenty of things the government can do here to make China pay for its actions,” Bass said.

He suggested that the U.S. government could go after the Chinese state-owned enterprises and take over their international assets such as properties in the United States and stocks issued in Western financial markets. The United States could even cancel its trillion dollars of U.S. Treasury securities held by China, he said.

China owned about $1.09 trillion in U.S. debt as of February, according to the U.S. Treasury Department. China is the second-largest U.S. foreign creditor, following Japan, at $1.26 trillion.

“What we can do is we can use the foundational bedrock of our countries, the rule of law, and we can exercise and enforce our laws on them for their malfeasance,” Bass said. “That is how we level the playing field against such a tyrannical, lying actor.”

The Japanese government announced recently that it would support domestic firms that move production out of China. Prime Minister Shinzo Abe is setting aside nearly $2.25 billion from the stimulus package to help Japanese firms in decoupling their supply chains from China, especially those in high value-added manufacturing.

Bass believes the U.S. government should do the same.

It’s a “moral imperative” for the U.S. government to set aside capital to help American companies leave China, he said.

The Trump administration is preparing an executive order that would help relocate medical supply chains from overseas to the United States since the outbreak exposed a dangerous level of dependence on China.

Bass said the pandemic has forced the U.S. government to revisit America’s over-reliance on China in medical drugs and equipment.

Many believe that the global dominance of Beijing in the manufacturing of medicine and medical equipment poses a national security threat to the United States and other nations.

U.S. companies, however, may face challenges in moving production away from China.

For the past few years, the companies operating in China have been blocked from transferring their profits out of the country, and for the past few weeks, the Chinese regime has started to require permits in moving supply chains, Bass said.

“Companies that do business in China, whether you’re Intel or Sony or BMW or Chevron, haven’t been able to get their dollar profits out of China since the fourth quarter of 2016,” he said. “And now we’re being told that maybe you can’t get your supply chains out.”

Moving Out of China

Most large companies have heavily invested in facilities and human resources in China to gain access to the Chinese market, and they have already “given up” their intellectual properties as a price of entry, says Steve Abbott, consultant at Patina Solutions, a supply chain consultancy.

Companies can move sourcing out of China “so long as contractual agreements do not prohibit the change of supply sources,” he told The Epoch Times.

However, breaking contractual agreements in joint ventures where contracts involve equity, revenue, or capital sharing will be heavy lifting for many U.S. corporations, he said.

Abbott believes governments can support resourcing to domestic operations by providing capital or low-cost loans to build domestic capacity. These funds can also be used to offset the penalties potentially imposed by China.

Without this kind of support, companies “will find it very difficult to walk away from these relationships,” he said.