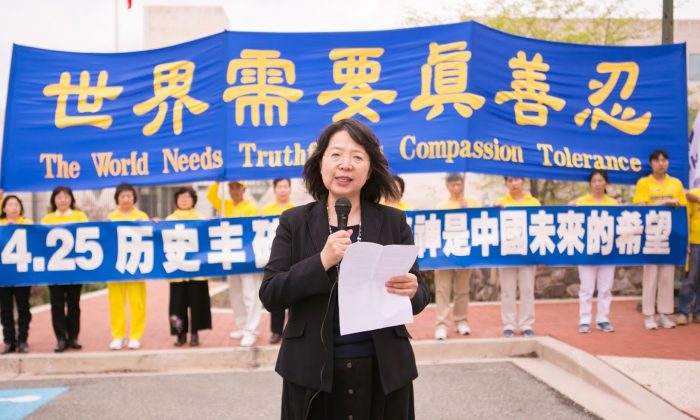 Ge Min, spokesperson for the Washington, D.C. Falun Dafa Association, at a rally commemorating the April 25 appeal in Beijing, in Washington on April 14. (Lisa Fan/The Epoch Times)
US News

WASHINGTON—A silent and peaceful appeal of more than 10,000 people at a “sensitive place” in China before a “sensitive date” 20 years ago seized the world’s attention, more so than even some of the loudest or most violent protests in history. Twenty years later, a similarly silent and peaceful rally was held in Washington to express a never-changing message.

On April 14, dozens of Falun Gong practitioners gathered in front of the Chinese Embassy in Washington to commemorate the 20th anniversary of Falun Gong practitioners’ appeal on April 25, 1999, in Beijing, which was widely covered by the world’s media as the first large-scale gathering in Beijing after the Tiananmen Square massacre 10 years prior.

Washington D.C. Falun Dafa Association spokesperson Ge Min recounted the events from the 1999 event. Ge said Falun Gong practitioners gathered along the streets near the State Appeals Office adjacent to the Zhongnanhai headquarters of the Chinese Communist Party (CCP) on April 25, after 45 fellow practitioners had been illegally arrested in Tianjin.

The demonstrators asked for three things: 1. The release of the arrested Falun Gong practitioners; 2. A legal and peaceful environment in which that they could practice without interference or harassment; 3. The legal right to publish Falun Gong books in China.

Ge said then-Chinese Premier Zhu Rongji went out to meet personally with Falun Gong practitioners, asked them to select three representatives, then led those three back inside Zhongnanhai for talks.

Ge said the peaceful conclusion of this event shocked the world, and many people praised it as a rational, peaceful, and successful appeal.

This appeal had offered the CCP a chance to choose goodwill, said Ge, but the Party instead chose to persecute these people who practice simple qigong exercises and live according to the principles of truthfulness, compassion, and tolerance. On July 20, 1999, a comprehensive, and most ruthless suppression of Falun Gong was launched.

Zhang Tianliang, a doctorate in electronic engineering and an associate professor at Feitian College in New York, was a participant in the 1999 appeal. Addressing the crowd in Washington by phone, he said there has been a lot of propaganda surrounding the historic event, including the claim that the CCP decided to persecute Falun Gong because the practitioners had “besieged” Zhongnanhai.

But in reality, harassment of Falun Gong started as early as 1996, Zhang said. Another qigong group that had around 30 million members also was suppressed, and its members had never “besieged” Zhongnanhai.

Zhang said the reasons for the persecution were that too many people were practicing Falun Gong, and what they believed was different from what the CCP believes.

The ultimate purpose of communism is to destroy humankind. Today, Chinese society has become a place where people are “racing to the bottom” and competing with one another to see who can be more evil, Zhang said. When a society comes to this stage, there is no hope, and this is exactly the result the CCP wants to see.

In this context, the 20-year effort by Falun Gong practitioners to end the CCP’s persecution is extremely significant, Zhang said.

Falun Gong practitioners are guarding the fundamental requirements for society, while suffering persecution and sacrificing themselves. That’s why, Zhang said, the spirit of April 25 is most important and shall be remembered forever.