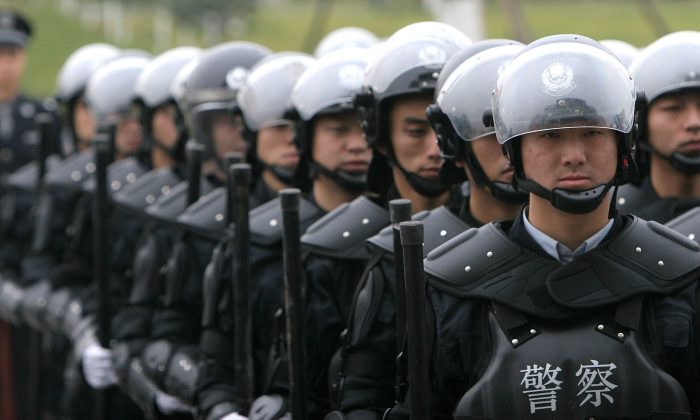 SWAT Team members in Chengdu, China, 2005. Over the last six months the Chinese regime has beefed up its security forces to face off against domestic unrest. (China Photos/Getty Images)
China

A Siege Mentality Grows in China

Riots in China’s streets, sudden outbursts of violence attributed to terrorists, and an apparent growing anger at the ruling regime, has led the Chinese Communist Party to further beef up its security forces with SWAT teams and armored vehicles, tighten patrols, and issue sharp propaganda against malefactors. But the regime’s high-handed approach does not seem likely to calm tensions.

Since a deadly car bomb attack in Beijing’s Tiananmen Square last October, attributed to Islamic terrorists, the atmosphere in China has remained tense. The Party has also created a new security body to direct the struggle against the forces of instability around the country.

“Terrorists will be nervous, separatists will be nervous, and extremists will be nervous. In general, all those forces who tend to threaten or sabotage China’s national security will feel nervous,” announced the Chinese regime’s Foreign Ministry spokesman Qin Gang, in a press briefing in January, as he spoke about the formation of a new National Security Commission to be headed by Chairman Xi Jinping, according to state media.

Explaining the new all encompassing security organ, Li Wei, director of the anti-terrorism study center at the China Institutes of Contemporary International Relations, which is affiliated with the regime’s Ministry of State Security, told Beijing Times, “Setting up the National Security Commission is to prevent crises before they emerge.”

But violent forces in China have succeeded in pulling off bloody attacks month after month, which neither China’s thick on-the-ground police forces, nor its Big Brother surveillance systems have been able to prevent or even squelch quickly.

On March 1, on the eve of a major political conclave in Beijing, masked knife-wielding assailants killed 29 people and injured 143 (including seven policemen) in a railroad station in Kunming.

On April 30, a train station in Xinjiang’s capital, Urumqi, was bombed on the last day of Xi Jinping’s highly publicized visit to the hot spot region, killing three and injuring at least 79 others. Xinjiang is home to a Turkic-speaking peoples, the Uyghur, who are generally dissatisfied with what analysts have described as the Party’s colonial-style rule.

Another railway station attack in Guangdong, capital of the southern Guangzhou Province, wounded at least six people on May 6.

Less than a month later, on May 22, two explosives-laden vehicles ploughed through a market in Urumqi, killing 31 and injuring at least 90, the most deadly attack to date.

The Party’s new security agency has responded to these bloody incidents with a heavy propaganda campaign, and thousands of highly visible police, SWAT teams, and military vehicles in cities across the country.

Beijing introduced armed patrols in mid-May to deal with domestic protests and terrorist attacks. Up to hundreds of armed patrol vehicles have been deployed in the capital, consisting of over 1,300 armed officers, in order to respond in three minutes or less to incidents involving guns, bombs, and terrorism, said Xinhua.

Armed police have also been conducting training drills, under the label of “counterterrorism,” which involve fighting in formation against crowds of attackers armed with clubs and bats—a scene that looks more like a street melee against angry crowds, rather than actual terrorists.

Jiangsu Province has over 11,700 police patrolling around the clock, with almost 3,000 firearms equipped vehicles to handle riots and other emergencies, reported the South China Morning Post.

The police themselves admit that problems of domestic instability and violence are frightening. Police deaths are rising to the extent that the Chinese Communist Party and nine departments of Civil Affairs announced a substantial increase in pension and widows’ benefits programs.

According to the Party’s Ministry of Public Security statistics, 449 police lost their lives in 2013. The first “National Security Blue Book” also referred to the high incidence of violence in 2013, the vast majority of it against agents of the state.

“A one-party system rules by terror,” said Li Tiantian, a rights lawyer in China, in an interview with New Tang Dynasty Television. “To keep a feeling of crisis, they must strengthen the sense of terror and threats to the people. Now they have to strengthen this sense of fear, because otherwise the regime cannot survive.”

Mr. Chen, a resident of Shanghai, told NTD: “This display is of more symbolic than practical significance. … The problems in domestic politics, the economy, and social conflicts are irreconcilable. The communist regime is paranoid and panic-stricken because of underlying social instability.”