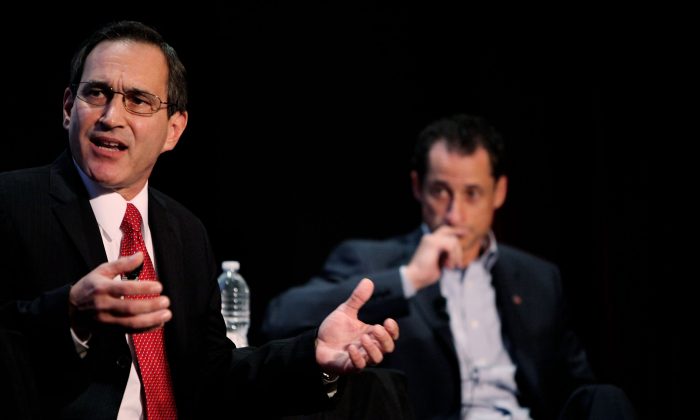 A Shutdown or a Coup? How It Was Engineered

What is the Tea Party and where did it come from? Was it a grass-roots movement nurtured in the bowels of deep dissatisfaction in the American electorate with “big government” and its inexorable turn towards Socialism?

Hate to disappoint folks who buy the populist revolt theory. Anyone remember the mad rant of Rick Santelli in 2009? He’s a fixture on the pro-business channel CNBC who actually was first to call for a Tea Party by millionaires in Chicago to protest against any relief for homeowners who were on the verge of being foreclosed upon.

It was this loudmouth who used his bully pulpit on the floor of the Chicago Board of Trade to make the original call.

The idea resonated with the armies of the resentful who always feel that the government should not help those in need—characterizing them as people living in bigger houses than they can afford and unfairly demanding a bailout from taxpayers.

Rick and the traders cheering for him apparently never heard about or cared about predatory lending and bank practices that have since led to massive fines and paybacks for years of mortgage scams.

No, to righteous “rebels” like Rick and Co., it was the people who were to blame and who deserve the tongue-lashing and class hatred that flowed out of his mouth against “the losers” backed by the media mouths of his minions.

They call themselves traders, but traitors might be used as well.
When Santelli got some attention from his fellow ideologues, the Republican right seized the idea.

Suddenly this bottom-up people’s movement was repackaged as a top-down political army by bringing together the Christian Right, professional pols, and right-wing political consultants who followed a strategy of intimidation and demagoguery, aided and abetted by media outlets like Fox and their fellow travelers of the Beck and Limbaugh variety.

They sought out unifying issues based on systematic distortions of the facts while appealing to the fears they had themselves reinforced. The fact that the president is black added fuel to their bombast even if they realized early on that they had to conceal their racial hostility and tone down their hatred.

Opposing what they labeled “Obamacare” became their organizing principle, larding on to it fear of “death panels” and an assault on basic freedom. Never mind the millions without health care. Who cares about them?

The Democrats were bullied early on to reject the use of the successful Social Security-like workable Medicare model or single-payer system and adopt instead a corporate-based approach that would further enrich the insurance companies and is, in fact, riddled with contradictions.

What the Republicans hid was that it was based on Republican ideas, as Mark Karlin at Buzzflash/Truthout explains: “As hard as it is to believe given the psychotic babble coming out of the mouths of House Republicans, the Affordable Care Act was the creation of a think tank revered by conservatives, the Heritage Institute, and promoted by Republicans in the early ’90s as an alternative to ‘Hillarycare.’

“Of course, none other than Mitt Romney made it his main legacy as governor of Massachusetts; i.e., that is to say before he retroactively denounced it to jump on the anti-Obamacare juggernaut in the GOP primaries.”

Their single-minded campaign distorting health care as Obamacare, a phrase that Obama later warmed to, has now led to the takeover of the House of Representatives and the shutdown of the government.

A well-funded campaign to knock off moderate Republicans and replace them with this simplistic Angry Brigade created a think- alive force that soon learned the tricks of Congressional longevity like gerrymandering districts to make them unchallengeable and voter suppression tactics to keep the minority vote down.

All of this was orchestrated in the shadows by operatives and funded by right-leaning billionaires thanks to the Supreme Court’s Citizen United decision.

Unfortunately, the left is given more to protesting than politics and did not compete, in part, because of its own disgust with all the money and immorality in politics.

Disillusioned by a president who wanted nothing to do with their values, they mostly withdrew from conventional politics into movements like Occupy Wall Street and issue-oriented campaigning. The labor unions, long the mainstay of Democratic Party politics, started shriveling in influence and turned into fundraisers, not marching feet.

The Right almost had the field to themselves even though Democratic battle axes like Harry Reid kept the Senate in line, delaying and frustrating the coup that is still underway.

“Don’t write the Republicans off as totally crazy. They know that if Obamacare works, it will wreck chances for attaining their real goal—lowering taxes on the rich, wiping out regulations and widening even more the gap between the very rich and everyone else.

“That is why they and their business allies are fighting so hard against the Affordable Care Act and seeking to bring the federal government to a halt. If the Republicans lose on Obamacare, it will be nearly impossible for them to shrink government the way they’ve been dreaming.”

Rev. Jesse Jackson puts the current crisis in a historical context that I have yet to see in the media:

“We’re not talking the Boston Tea Party here. We’re talking the Fort Sumter Tea Party. We’re talking about a modern, right-wing movement built on a new Republican South in reaction to the Civil Rights Act of 1964 and the Voting Rights Act of 1965. A ‘Southern Strategy’ led by Strom Thurmond and Jesse Helms led directly to the elections of Richard Nixon and Ronald Reagan and eventually to Speaker Newt Gingrich and President George W. Bush.

“The Fort Sumter Tea Party has never accepted the legitimacy of Barack Obama’s presidency. A huge chunk of the right wing has subjected the first African-American president to massive abuse, name-calling, and vicious threats.

“Unfortunately, due to John Boehner’s lack of leadership in the House, the tea party minority faction now dictates policy and rhetoric to the entire GOP. This means that the GOP continues to try to delegitimize, defund, and delay Obamacare. They have spent the last five years trying to keep poor and working Americans from getting health care. This is wrong, it’s immoral, and it’s very undemocratic, since Barack Obama was re-elected by a large margin.”

This shutdown of the government is not about too much federal spending or how to make health care really affordable. It’s not even about Obama or the Democrats. It’s about realigning politics, and putting an extreme minority political movement in permanent power. As both sides blame each other, few solutions are in sight.

Can it be stopped? Will it be?

This crisis exposes the structural problems in our politics and calls attention the contempt a majority of Americans have for both the Congress and this movement of nullification. Obama seems to lack the fortitude to really stand up to the hostage takers. He has not given in but he hasn’t prevailed.

Where are the leaders and the movements who can turn this disgraceful low moment in our political life around?