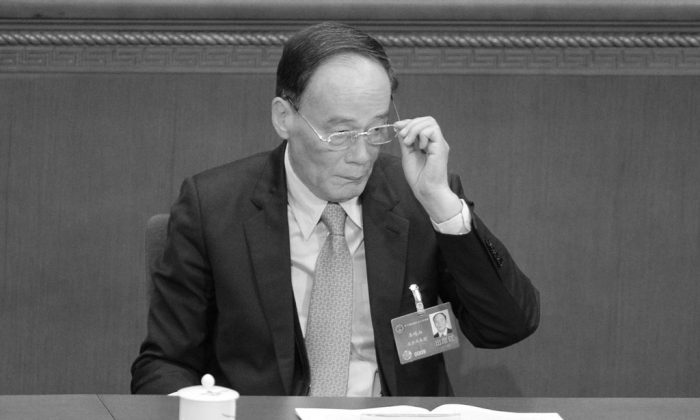 Wang Qishan, Secretary of the CPC Central Commission for Discipline Inspection (CCDI), attends the opening session of the 12th National People's Congress (NPC) in the Great Hall of the People in Beijing on March 5, 2014. (Wang Zhao/AFP/Getty Images)
China

A Sharp Knife and an Ancient Essay, Tools for Rooting Out Corruption in China

The Chinese regime’s corruption busters have armed themselves with a “sharp knife” and an “ancient Chinese essay” to take down Chinese officials in 2015. They are using the same tactics as last year, which turned out to be quite successful, according to state-run People’s Daily on Feb. 4.

Luring the Tiger Out

The ancient Chinese essay, Thirty-Six Stratagems, teaches the tactic of enticing the tiger to leave its mountain lair. Simply put, it is to lure your opponent out to where he is vulnerable.

In the real world, corrupt officials are moved to new posts, especially if their original position had given them a vantage point where they could get wind of anything going on around them, or where they could easily destroy any incriminating evidence.

A similar tactic is to fool the corrupt officials, making them believe that they are safe and secure, by either giving them their jobs back, moving them to a more comfortable position, or giving them a promotion.

The People’s Daily gave this example: Jiang Jiemin, an oil executive, six months after he got his job back as a director at the Assets Supervision and Administration Commission of the State Council and was immediately put under investigation.

Many high-ranking Party officials might have had held their positions for dozens of years through which they built up a large network of connections. It might be very dangerous for corruption busters to move in on such high-profile targets without a plan.

So the “knife” targets the wings first, that is, taking down associates and officials that are on the perimeter of the targeted official’s network, according to the People’s Daily article.

Preparations for the investigation (“sharpening the knife”) are done stealthily.
— People's Daily

In Shanxi Province four provisional standing committee members and seven other provincial-level officials, were successfully purged in 2014. Corruption busters had moved in one after another, without going after the highest-ranking official in the province first.

Sharpening the Knife Without Making Any Noise

The purging of former secretary of Nanjing, the capital of Jiangsu Province in eastern China, Yang Weize, is a perfect example of how corruption busters were able to keep the investigation under wraps before Yang was actually sacked.

To intimidate other officials to the maximum extent, it is important that preparations for the investigation (“sharpening the knife”) are done stealthily until dealing the final vicious blow in one strike, stated People’s Daily.