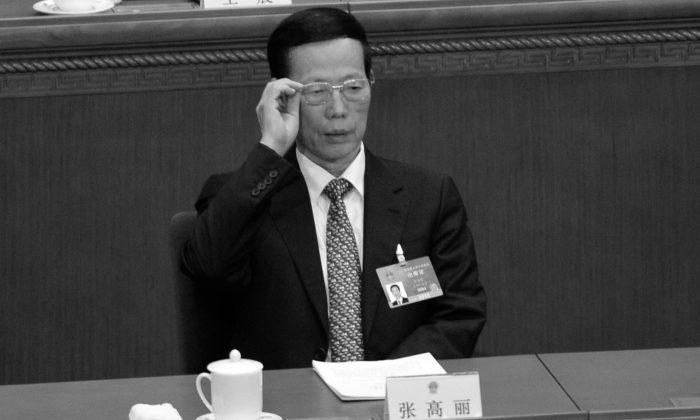 A spokesperson for China’s Ministry of Foreign Affairs said the sexual scandal allegation involving a former Chinese vice premier is “not a diplomatic issue.” A couple of Chinese commentators offered different interpretations to queries from The Epoch Times.

Peng alleged that Zhang coerced her into having sex with him about ten years ago and that she later became Zhang’s mistress. She also alleged that Zhang’s wife colluded with him to invite Peng into his residence, and when Zhang assaulted Peng, his wife stood guard outside the room.

Peng is one of China’s most celebrated athletes. She is 35 years old, while Zhang is 75.

During a regular press conference by China’s Ministry of Foreign Affairs on Nov. 3, the ministry’s spokesperson Wang Wenbin responded that he never heard of it. The remark was not included in the ministry’s transcript.

According to Lee Cheng-hsiu, a senior assistant research fellow at Taiwan’s National Policy Foundation, this sex scandal allegation came at a politically sensitive time in China, as the Chinese Communist Party (CCP) will hold its annual plenary session on Nov. 8.

Lee told the Chinese edition of The Epoch Times that it’s well known that Zhang Gaoli is a member of Jiang Zemin’s political faction. Therefore, it’s possible that Zhang’s scandal was deliberately released by people close to Xi Jinping in order to send a message to the Jiang faction. At least it was intended to intimidate these people not to challenge Xi’s absolute authority and leadership, Lee said.

Lee believes that years of factional struggles within the CCP have helped Xi to purge most of his political rivals, paving the road for his re-election next year. No other CCP official is powerful enough to challenge him by then.

“Such scandals involving the CCP’s top leaders will not hurt Xi, as they are no longer big surprises in China. Moreover, Zhang is a retired official who has no influence. So it will not cause any harm to the current Xi administration,” Lee said.

According to Lee, even former Chinese leader Deng Xiaoping used to consult other senior leaders when making key decisions, while at present Xi single-handedly controls the CCP’s Central Committee. If he becomes reelected next year, even the CCP’s old slogan of “collective leadership” may be abandoned.

An attorney who lives in China and only wished to give his last name, Zhang, told The Epoch Times that Peng’s allegations were likely backed by someone in the CCP’s top circle.

“Why did Peng publicly release this post on Weibo at this time and in such detail? And how could this post remain on Weibo for so long? It indicates approval and support from high-level officials,” Zhang told The Epoch Times.

There must be a deeper reason for Peng exposing Zhang Gaoli’s transgressions against her now, he said. It’s too early to conclude what the intention is, but it’s possible that Xi wanted to use the scandal to direct his dissatisfaction at Jiang Zemin, he said.

A relative of a former high-level Chinese official in Beijing, who asked to remain anonymous, told The Epoch Times that the Chinese foreign ministry had pretended to be ignorant of the matter.

“It’s so hugely shameful that a [former] top CCP leader was found to have done such a thing,” he said. “Of course the Ministry of Foreign Affairs wouldn’t respond to the reporter’s question.”

He also said that he believes Xi Jinping will not hold Zhang accountable because sexual impropriety is widespread among CCP officials.

“Who in the top leadership is clean? Almost everyone has extramarital affairs,” he said. These officials all learned this from Mao Zedong who is known to have led a promiscuous life, so they think it’s not a big deal, he said.

“Although every single one of the CCP leaders is corrupt, no one can stand having these things exposed. They will turn a deaf ear to comments and pressure from the public. So I think the authorities will remain silent and leave it unsettled. That’s precisely how the CCP handles such affairs,” he said.

The source believes it’s likely Peng had the support of an influential figure. “This person who supported her is probably at odds with Zhang Gaoli. Zhang is a nasty person, and has done many nasty things that could be held against him,” he said.

But as to who that “influential figure” might be, he wasn’t sure. He posited that all of this may have something to do with the massive explosion at a chemical warehouse in the port of Tianjin in 2015, one of the deadliest industrial accidents in Chinese history. Many believe that Zhang, who was the Party boss of Tianjin at the time, was responsible for the disaster.

Ning Haizhong contributed to this report.