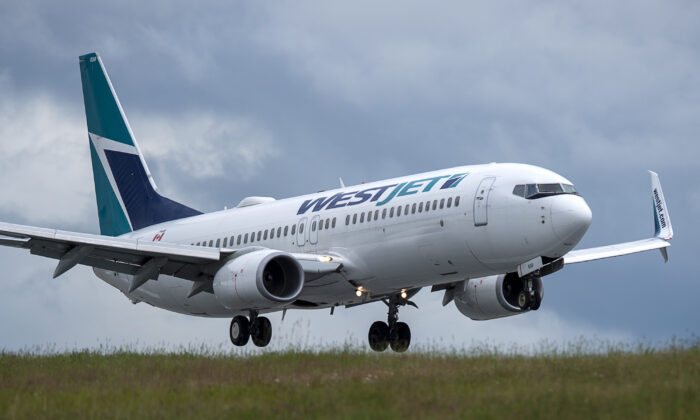 One of Canada’s largest airlines says the federal government’s new Omicron variant travel advisory is “not based on science and data,” and is calling on Ottawa to make its travel-related COVID-19 data public.

On Dec. 15, the WestJet Group issued a statement denouncing the travel advisory warning against all non-essential international travel due to the spread of the Omicron variant, saying the move “significantly undermines aviation’s proven safety record in response to COVID-19” and constitutes “a setback in Canada’s progress and its successful transition from relying on blanket advisories and policies.”

“Air travel is the most tested and protected consumer activity in Canada, every person travelling internationally is tested on average twice throughout their travel journey,” WestJet President and CEO Harry Taylor said in the statement.

“To those who were planning to travel I say very clearly, now is not the time to travel,” Duclos said. “The rapid spread of the Omicron variant on a global scale makes us fear the worst for Canadians that may think of travelling.”

Taking a stronger stance than the travel advisory issued shortly after the emergence of Omicron, the new one warns Canadians that travel to an area with the variant could hinder their return to Canada.

WestJet’s statement denounced Canada’s travel measures for being “out of step” with the rest of the world, and for contradicting the World Health Organization’s (WHO) advice against travel bans.

“Blanket travel bans will not prevent the international spread, and they place a heavy burden on lives and livelihoods,” WHO said in a statement on Nov. 30.

“In addition, they can adversely impact global health efforts during a pandemic by disincentivizing countries to report and share epidemiological and sequencing data.”

The airline wants an explanation from the government on how it arrived at its decision.

“As the only fully-vaccinated air travel sector in the world, WestJet is calling on the government to publicly share the travel related COVID-19 data that has been used to re-impose the advisory and advice targeted towards fully-vaccinated Canadians and the travel and tourism industry,” Taylor said.

“Canadians have done everything they were asked to do, 2x vax, masks & distancing, many took the jab for work and travel. Demanding the scientific data used to impose a travel restriction is reasonable of @WestJet,” she wrote.

The Air Line Pilots Association (ALPA), the world’s largest pilot union representing more than 61,000 pilots at 38 U.S. and Canadian airlines, says Duclos’s announcement will force the aviation sector to “absorb further losses when it was finally heading towards stability.”

“Until the government can adequately provide scientific data, and epidemiologists have explicitly commented about the effectiveness of such restrictions, ALPA Canada does not support introducing further travel restrictions,” said ALPA president Tim Perry in a Dec. 15 statement.

“Without any stabilizing measures in place to assist the air transportation industry and its workers, any further travel restriction announcements made by the federal government to mitigate COVID-19 should be done in consultation with aviation stakeholders.”