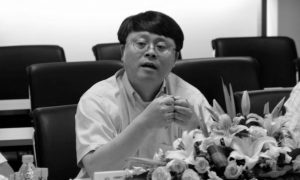 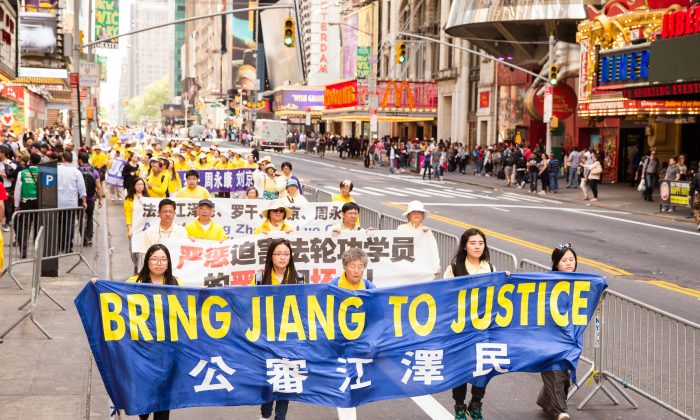 Falun Gong practitioners hold a banner in reference Jiang Ziemin, the previous leader of China who is responsible for conducting the persecution of Falun Gong, during a Falun Gong parade in Manhattan on May 15, 2015. (Edward Dye/Epoch Times)
China

The last time someone in China tried to sue Jiang Zemin, the former leader of the Chinese regime, the person was sent to jail and died there of torture. A co-signee to the complaint spent five years in a prison in Tianjin and got nine of his teeth knocked out.

But earlier this month, Zhang Zhaosen, a practitioner of Falun Gong, filed a criminal complaint against Jiang—and lived to tell the tale.

While at the Xiangyang Intermediate Court, Hubei Province on May 15, Zhang, who was standing trial on the charge of “disseminating information about Falun Gong on the Web,” submitted a complaint against Jiang, according to Minghui, which carries firsthand news about Falun Gong in China.

A representative from the procuratorate, China’s state prosecutor, accepted the documents, and Zhang was allowed to go home. This in itself was remarkable.

“I don’t recall anything like this happening before,” said Xia Yiyang, a senior director of the Human Rights Law Foundation, a nonprofit legal organization based in D.C., which has sued Chinese officials overseas.

Whether the procuratorate will take any further steps in the case against Jiang is unclear—but the fact that Zhang Zhaosen was able to return home is significant. Previously, suing Jiang Zemin as a recourse of justice led to fatal consequences.

Zhu and Wang were arrested two weeks after their application. Wang died a year later after sustaining internal injuries while being tortured in police custody. Zhu, a Hong Kong citizen and businessman, was held in a Tianjin prison for five years, and nearly lost all his teeth during torture. He tried to sue Jiang several more times while in prison.

Jiang is being sued for launching and sustaining the now 16-year persecution against Falun Gong.

On July 20, 1999, the Chinese Communist Party launched a sweeping suppression of Falun Gong, a traditional Chinese meditation group whose adherents do gentle exercises and live by the principles of truthfulness, compassion, and tolerance.

Former Party leader Jiang was the force behind the campaign, and used his role as head of the Party to force other members to pledge allegiance to him, and struggle against Falun Gong. With the support of key officials in the security and propaganda systems, he began spreading anti-Falun Gong propaganda in China and abroad, and started the wholesale arrest, and torture of practitioners.

A number of reasons have been proposed for the campaign, one of them being Jiang’s jealousy of the popularity of the practice—in 1999, there were an estimated 70 million–100 million practitioners but only 63 million Party members, and Falun Gong was seen as a competitor for the loyalty of the people. Jiang created the extralegal, Party-based security agency, the 610 Office, to carry out his personal crusade against the practice.

To date, over 3,800 practitioners have died from torture and abuse, according to Minghui, which closely tracks the persecution. Because of the difficulty in getting information out of China, the true number of such deaths is suspected of being many times higher. Hundreds of thousands more are still held in prison, brainwashing centers, and labor camps.

Jiang’s campaign also led to the mass harvesting of organs from imprisoned Falun Gong practitioners, according to researchers who have studied China’s rocketing organ transplantation numbers since 2000. Two Canadian researchers estimate that 60,000 practitioners were killed for their organs between 2000 and 2008, while Ethan Gutmann, an author whose new book “The Slaughter,” focuses on the issue, said that harvesting continued until at least 2013.

Earlier this year, the World Organization to Investigate the Persecution of Falun Gong, a research group based in the United States, published an audio recording from a phone call with a high-ranking military official, who appeared to indicate that the order to carry out organ harvesting of Falun Gong came from “Chairman Jiang.”

Four days before Zhang Zhaosen handed the complaint to the public prosecutor, he sent criminal complaints against Jiang to China’s highest court and the Supreme People’s Procuratorate via express mail. Five other Hebei Falun Gong practitioners also jointly submitted a lawsuit against Jiang on May 20, according to Minghui.

Other victims of the campaign around China did similarly. Zhu Hefei, a former official with an educational institute in Jiangsu Province, eastern China, filed criminal complaints against Jiang with the Supreme People’s Court and the Supreme People’s Procuratorate on May 16 and May 19 respectively.

Despite having unsuccessfully sued Jiang six times while in prison, Zhu Keming plans to try again. He told Chinese language Epoch Times that he will submit fresh complaints to China’s highest courts, as well as the National People’s Congress, the regime’s rubber stamp legislature.

So far, none of these individuals reports having been harassed or targeted by security forces—an enormous shift from a decade ago.

Correction: An earlier version of this article said Zhu Keming lost all of his teeth during his five year prison stint; he lost nine teeth. Also, Wang Jie passed away a little over a month after being released from jail, not inside jail.