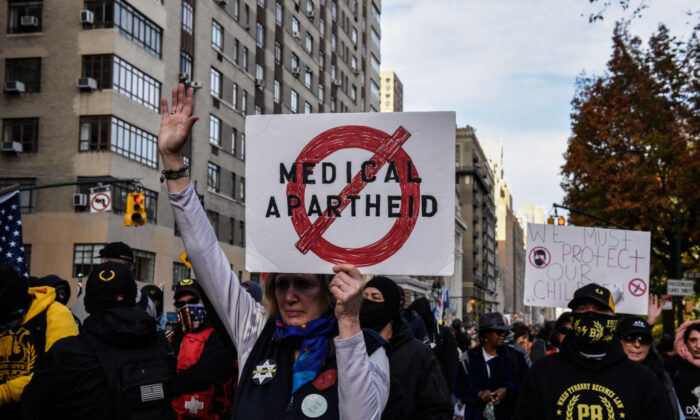 In May and June 2020, Black Lives Matter protests took place across the United States prompted by the death of George Floyd. The New York Times estimates that on June 6, 2020, alone, more than half a million people turned out to support Black Lives Matter protests across the United States. These protests took place despite an ongoing pandemic and lockdowns across the country. Despite calls to stay home and socially distance, protesters marched in the thousands across nearly 550 cities because they believed protesting in support of black communities was more important than the risk to their health if they caught COVID-19.

Fast-forward one year and we have vaccine mandates in place in New York City. Since Sept. 13, individuals have been required to show proof of vaccination to gain access to bars, restaurants, nightclubs, theaters, museums and galleries, stadiums, gyms and indoor fitness classes, live music, and the list goes on. If you’re hungry and unvaccinated in New York City, you’re left to buy food from street vendors and eat in the cold or stay at home. In addition, all City employees are required to be vaccinated, and beginning Dec. 27, New York City will require all private-sector employees who perform in-person work to be vaccinated.

So what if you don’t have the required proof of vaccination? Unless you’re willing to risk a fake, you’re essentially banned from all spheres of public life and don’t enjoy the same rights and opportunities as the vaccinated. Society has become segregated, separating the vaccinated and the unvaccinated, the compliant and the non-compliant, the “clean” and the “unclean.” These mandates come despite a myriad of scientific studies proving the vaccine doesn’t prevent the transmission of COVID-19.

Vaccine mandates deny half the black community in New York City opportunities to partake in public life and will inevitably perpetuate African American underrepresentation in public life. Forget improving black representation in academia, the arts, sports, or political office. Vaccine mandates have created a new segregated society of the “haves” and “have-nots”—those who have access and those who are shut out. Yet, those who are shut out are still expected to pay taxes that are distributed among public institutions, and often many private institutions, that they can no longer enjoy or be employed by.

These vaccine mandates have no regard to bodily autonomy and the right to make an informed medical decision for themselves based on their risk profile, or fears based on historical medical experiments on blacks in the United States.

It would be remiss of me not to mention that these vaccine mandates affect all unvaccinated people in New York City, but the African American community, due to history and an understandable cultural suspicion of medical experiments, currently has the lowest vaccination rates of recorded ethnic groups.