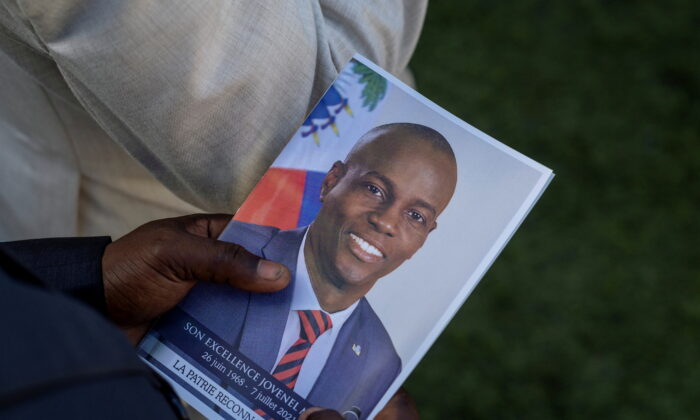 A person holds a photo of late Haitian President Jovenel Moise, who was shot dead in early July, during his funeral at his family home in Cap-Haitien, Haiti, on July 23, 2021. (Ricardo Arduengo/Reuters)
International

US Charges 2nd Key Suspect in Killing of Haiti’s President

MIAMI—A Haitian-Chilean businessman considered a key suspect in the killing of Haitian President Jovenel Moïse appeared in U.S. federal court on Thursday and was accused of providing weapons to former Colombian soldiers charged with fatally shooting the Caribbean country’s leader.

Rodolphe Jaar, a former U.S. government informant who was recently detained in the Dominican Republic, was charged with conspiring to commit murder or kidnapping outside the United States and providing material support resulting in death, knowing or intending that such material support would be used to prepare for or carry out the conspiracy to kill or kidnap.

Jaar, 49, is the second foreigner charged and arrested in the United States for his alleged role leading to the July 7 killing of Moïse at his private residence. In early January, former Colombian soldier Mario Antonio Palacios Palacios faced the same charges and remains detained at a federal prison in south Florida.

If convicted of the charges, Jaar and Palacios could face life in prison.

The judge assigned Jaar a public defender and set a detention hearing for Jan. 26 in which his attorney could request he be freed on bond, although prosecutors oppose such a move. He also faces an arraignment hearing on Feb. 3rd, in which he could declare himself innocent or guilty. Meanwhile, Palacios has his second court appearance scheduled for Jan. 31.

During Thursday’s hearing, Jaar responded in English to some of the judge’s questions to determine whether he could afford his own attorney or needed a public defender. Clad in a beige prison uniform and wearing a face mask, Jaar told the judge that he once owned businesses in Haiti but distanced himself from them six months ago and was not receiving any income. He added that he had $2,000 in his bank account.

Jaar was born in Haiti and has a college degree in business administration, according to court records. He is not a U.S. citizen.

He was indicted in 2013 in federal court in South Florida on charges of conspiring to smuggle cocaine from Colombia and Venezuela through Haiti to the U.S. He pleaded guilty and was sentenced to nearly four years in prison, according to court records.

More than 40 people have been arrested in the case, including 18 former Colombian soldiers, the majority of whom the Colombian government says were duped.

U.S. authorities said that both Jaar and Palacios, the ex-Colombian soldier, voluntarily agreed to face charges in the United States. Palacios was detained in Jamaica in October and was flown to the United States. During a stopover in Panama while on a flight from Jamaica to Colombia. Federal officials say they had interviewed him while he was still hiding in Jamaica.