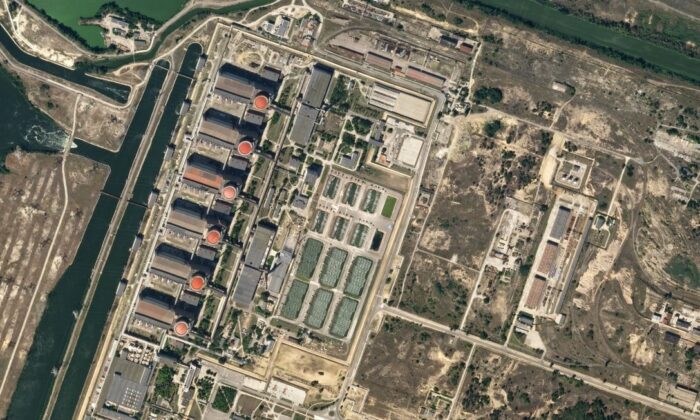 An overview of the Zaporizhzhia Nuclear Power Plant in Enerhodar, Ukraine, on Aug. 7, 2022. (Planet Labs PBC/Handout via Reuters)
Viewpoints

Ukraine, the scene of the Chernobyl nuclear plant catastrophe in 1986, may soon provide an encore, only this time it won’t be an accident. The Zaporizhzhia nuclear power complex, Europe’s largest, has been bombarded by artillery, rockets, and drones during the Russia–Ukraine War.

Shelling Zaporizhzhia “is completely unacceptable and must be avoided,” warned the United Nations’ International Atomic Energy Agency (IAEA) on Aug. 6, saying it could lead to “the very real risk of a nuclear disaster.”

“Any attack to nuclear plants is … suicidal,” U.N. Secretary-General António Guterres stressed in condemning the attacks.

Although there’s no dispute that the nuclear plant is being attacked, which army is doing the attacking is very much in dispute. According to Energoatom, Ukraine’s nuclear power plant operator, the Russians are the attackers, their shelling having led to partial shutdowns and damage to three radiation monitors around the storage facility for spent nuclear fuel. According to Ukraine’s ambassador to the IAEA, Russian shelling is designed to cause electricity blackouts in southern Ukraine, which Zaporizhzhia continues to service.

Ukrainian claims that the Russians have been attacking the nuclear plant to cause blackouts, and somehow missing the target, is nothing short of bizarre, since the Zaporizhzhia complex has been under Russian control since March. The Ukrainian accusation not only fails to explain why the Russians have been unable to incapacitate the nuclear complex, but it also fails to explain why the Russians would want to, since the reactor is keeping the lights on in the Russian-controlled south of Ukraine.

The Russian-speaking region, moreover, is about to hold “a referendum on the reunification of the Zaporizhzhia region with the Russian Federation,” according to Yevgeny Balitsky, the head of the pro-Russia administration in the region.

The Ukrainians also offer other explanations for bombardments at Zaporizhzhia, such as false-flag Russian operations designed to blame Ukraine for damaging the plant. Ukraine also claims that Russians are using Zaporizhzhia as a military base from which to fire rockets at Ukrainian targets, thinking that Ukrainians wouldn’t fire back.

This explanation is the official position of the U.S. government, except that even independent media outlets critical of Russia, such as Grid, state that the Ukrainians are indeed firing back, despite the risk of nuclear conflagration. Independent journalists sympathetic to the Russian position, such as Scott Ritter, a former U.N. weapons inspector, contradict both the Ukrainian and American claims, squarely blaming Ukraine for reckless and concerted attacks on the nuclear plant.

While it makes no economic or military sense for the Russians to attack a nuclear plant that would cost it an important asset and black out a Russian-controlled area, it makes great military sense for Ukraine to try to create a crisis on Russian-held territory that would stymie Russia’s military advances and cause a large-scale evacuation, much as occurred in 1986, when the Chernobyl accident led tens of thousands to flee the radioactive fallout.

This scenario is very much on Russian minds. According to Vladimir Kuznetsov, Russia’s former chief nuclear inspector, a successful strike on the storage facility that holds spent nuclear fuel could lead to radioactive “contamination of not only the industrial site but also the Dnepr river which is nearby.” He warned that the attack would also create a fire, and “God knows where the wind would send the combustion products.”

To stop the disastrous consequences of another Chernobyl, Russia has demanded that the U.N. send in inspectors to confirm that the shelling has been coming from Ukrainians, to pressure Ukraine to stop the bombing. The U.N. considers it too dangerous to dispatch inspectors and claims neutrality, justifying inaction by saying the reports it receives from the Ukrainian and Russian governments are “contradictory.” Ukraine and the United States futilely demand that the Russians abandon the area to allow for the creation of a demilitarized zone around the plant.

Meanwhile, the bombardments of the nuclear plant continue, with scarcely a care for the possibility of a catastrophic nuclear accident at Zaporizhzhia. The radioactive plume from Chernobyl reached as far as Lapland, where reindeer herds remained radioactive for decades. As Kuznetsov might say, who knows where the fallout from Zaporizhzhia, which is 50 percent larger than Chernobyl, might land?