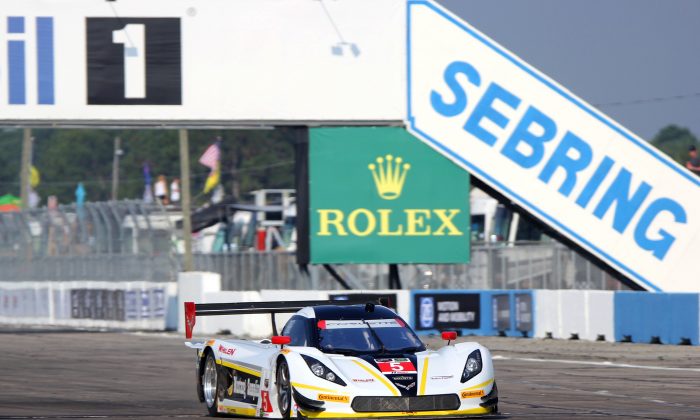 A Sebring 12 Hours Worthy of the Name

SEBRING, Fla.—When the Tudor United SportsCar Championship was formed by the merger of the American Le Mans Series and the Rolex Sports Car Series, many longtime sports car fans worried that the new series would sully the reputation of the Sebring Twelve Hours

The Twelve Hours of Sebring isn’t just a race. Sebring is the birthplace of American sports car racing, the oldest track and one of the toughest anywhere in the world, not just in North America.

For 63 years Sebring has hosted a 12-hour sports car race which actually mattered throughout the entire sports car community around the world.

Sebring was the first U.S. track to attract the big European teams like Porsche, Ferrari, Alfa Romeo, and Jaguar. It was the first track to host international events, and it was one of the races that every driver wanted to add to his resumé.

Sebring is still the track where the powerhouse factory teams come to test their latest creations; if a car can survive 12 hours on Sebring’s bumpy concrete in the Florida heat, 24 hours at Le Mans or Daytona will be a breeze.

After the American Le Mans Series merged with the Rolex Sports Car Series, and the World Endurance Championship siphoned off some of the big international teams, Sebring seemed to lose some stature. Some long-time Sebring attendees felt that the Tudor Series didn’t do justice to the event—the LMP1 class, the fastest and most advanced sports cars in the world, would no longer race at Sebring.

Despite that, the Tudor series worked hard to make sure that both Daytona Prototypes (Rolex) and LMP2 (ALMS) could race together fairly as the top class, and finally, after a season of trying unsuccessfully, the series seems to have found the balance.

With the 2015 race, Tudor proved that it can safeguard Sebring’s reputation.

The Tudor Championship simply was not ready for Prime Time at the start of the 2014 season.

The 2014 Sebring 12 Hours was decided by rules, not racing. Officiating errors, chassis imbalance, and unnecessary caution periods destroyed the race, and offended a lot of fans.

It was only the Tudor Championship’s second race, and the organization was still melding the two component series’ rule sets and racing (and commercial) philosophies. It took several races before the gears started to mesh, and not until Petit Le Mans, the last race of the season, did Tudor really look competent.

Apparently Tudor staff didn’t waste the off-season, because the series started 2015 at a far higher level than it finished 2014. The season opener at Daytona was a proper endurance race, and Sebring was even better.

As one Internet poster put it, “[Sebring this year] was run as ALMS as a race could be run.” Among North American sports car fans, there is not much higher praise.

Given the freedom to race, the drivers and teams put on an awesome show. There was no need to give away free laps or use yellow flags to create an “exciting” sprint finish; there was no need to manage the racing to try to create “racing entertainment.” The fans got a real race and they loved it.

The fact that Daytona Prototypes (cars from the generally less popular Rolex Series) swept the podium was not seen as a drawback, because everyone watched those cars earn their winning positions. The more exotic P2 cars were a little faster but mechanical woes and driver errors slowed or sidelines all of them. Most of the DPs ran flawlessly, or were able to repair their problems during the race.

There was no manufactured sprint finish; the winning #5 Action Express racing Coyote-Corvette won by a full lap, and led the last 149 laps. Fans loved it just the same; more in fact, because it was real racing. The tension came not from wondering who would win the “Green-White-Checkers” finish, but from wondering whether the AXR car would survive, whether other teams would find more pace as the track changed, and wondering how big a margin AXR could open.

The sheer joy of watching Sebastien Bourdais jump into the car just before sunset, one of the most difficult periods because track conditions are changing so dramatically, and steadily increase the lead, is exactly the sort of thing that stirs the hearts of sports car fans. No race “management” needed—real racing is really exciting. And apparently Tudor has realized this.

Cars Are the Stars in Sports Car Racing

The Tudor Championship is not perfect. Fans are always going to want the best cars in the world, and right now that means the LMP1 cars which only race in the World Endurance Championship.

If Tudor cannot attract the LMP1s (and economics make it seem impossible) the Tudor needs to plan ahead to introduce a more exciting type of car as its top class—particularly since the Federation Internationale de l’Automobile, the worldwide racing governing body, is planning to emasculate the P2 class starting in 2017.

On the plus side, the series is planning to allow full GT3 spec cars into the already excellent GT Daytona class, which will open the class to an even wider variety of cars and teams from all over the world. Tudor already has some of the best GT racing on the planet with the GTLM class; adding GT3 will only strengthen that.

Tudor seems to be learning that sports car fans care about cars more than celebrity drivers or manufactured moments of excitement—sports car fans would rather watch amazing machinery racing unfettered, even if the racing isn’t “close” all the time. Some races will naturally end with sprint finishes (like the Rolex 24 did this year) and some will be really close, and some will be dominated by a team which simply did better than the competition at setting up and adjusting the car through the race.

A lot of fans were afraid that the Tudor Championship (which is ultimately owned by NASCAR) would reduce sports car racing to a bunch of identical cars crashing into each other with lots of “debris” yellows designed to bunch up the field and create a lot of restarts—a formula which works well for NASCAR, by the way, but is anathema for sports car aficionados.

Tudor management might have had that plan at the start; we might never know. What is clear is that the bosses at Tudor have been willing to listen to the fans and to adapt, willing to give the fans the kind of racing those fans want and are willing to pay for.

The crowd at Sebring this year was healthy but not overflowing. The fan base was pretty disappointed after Sebring 2014, with its six hours of yellows and numerous officiating errors, plus a questionable late-race caution period creating the “Dash for the Cash” finish which invalidates 11 1/2 hours of careful strategy.

There was still plenty of craziness (the fun kind) in Green Park, and there was plenty of socializing and sharing of food and drink. There were plenty of fans talking about every aspect of the race, and the usual sea of campers, tents and motor homes. Even on Thursday the crowd was healthy, and it grew steadily.

Pit lane was packed during the pre-race Grid Walk, when the fans are allowed to mingle with the teams and drivers and inspect the cars close up. The fences were lined with spectators throughout the day, even during the 90+-degree heat of the afternoon. A sea of fans flooded onto pit lane after the race to watch the podium ceremonies.

Some folks said it was easier to find a camp site, and that driving around during the race to get to different viewing spots was a lot less hectic than in some of the record-setting years when the Peugeots and Audis were battling it out. Even so, the crowd was healthy, despite how many people were disappointed by the 2014 race.

Hopefully as word spreads that this year’s race was a Real Sebring 12 Hours, worthy of the heritage of this great race, fans will start reserving camp sites and making vacation plans for 2016.

Still Challenges Ahead, but Also Hope

The Tudor Championship heads to California for a pair of races, the Tequila Pátron Sports Car Showcase at Long Beach on April 18 and Mazda Raceway Laguna Seca on May 3. Long Beach is a street race, Laguna Seca a traditional road course—two very different venues. Tudor needs to nail both events, both for the sake of the teams, who need to please their sponsors, and for the fans, who have to be excited enough to tune in and create sponsor value.

The series has momentum after two great races at Daytona and Sebring; Long Beach and Laguna Seca, while not having quite the history or stature as the those two venues, are still considered sports car classics. Success at these two tracks (and in those important markets) could boost the series forward past the unavoidable distraction of the Le Mans 24 in mid-June.

The Tudor schedule resumes on June 28 with Sahlen’s Six Hours of the Glen, another classic endurance race with a long history on a challenging circuit. If the California rounds go well, fans should return to the series eager to see another great race.

The next three tracks: Mosport, Lime Rock, and Road America—are three more fan-favorite classics. Even in a bad year fans will turn out—and more important, tune in—to watch racing at those venues. If Tudor stays as strong through mid-season as it has in its first two races, ratings could really kick up—which the series needs.

The schedule couldn’t be stronger; the start of the season couldn’t have been much better. The Tudor Championship is perfectly poised to explode in popularity and profitability, to finally fulfill the promise offered but not delivered by ALMS and Rolex.

Tudor management, please take heed. Daytona and Sebring show that real racing is the right product. Keep it going, and someday we will all be looking back at 2015 as the year when North American sports car racing regained its stature.