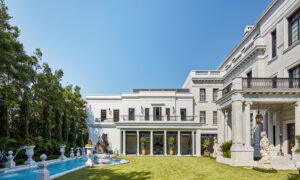 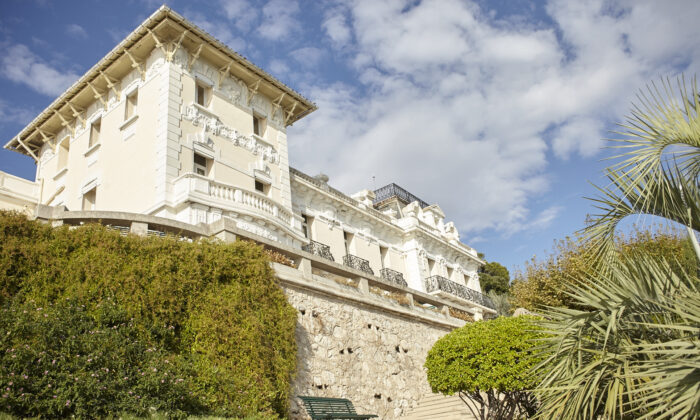 A 19th-century villa in Marseille, France, is restored to retain as much of the original architectural details as possible for a harmonious combination of past and present
By Erin Tallman
biggersmaller
Print

Luxurious and striking villas tend to take our minds to the world of lavish parties, with famous figures in fancy dresses. Villa Gaby is that and more—as it has been the property of a local hospital center, Assistance Publique des Hôpitaux de Marseille (AP-HM), since the 1950s.

In 2015, the AP-HM entrusted the villa to MCO Congrès, an agency specialized in putting medical conventions together, which initiated renovating the property to become a site dedicated to promoting science and medicine—allowing Marseille a new and unique place to organize national and international events. But the story of how Villa Gaby became involved in the medical field in the first place is what Marseillais relish most.

The villa is named after Marseille-born Gaby Deslys, a “femme libre” who took an unconventional path, considering the early 20th century period.

Performing at venues from the Moulin Rouge to the Casino de Paris, she was a jazz singer who frequently appeared in “La Revue Parisienne,” a prestigious monthly literary and political journal. She was the first international music-hall star; her jazz songs reached the United States and England. In 1909, she met the young Manuel II of Portugal, the country’s last king. She was later rumored to have had a romantic relationship with him.

The artist lived through many historical events such as the end of the Portuguese monarchy, the beginning of the first Czechoslovak Republic, and the early days of American cinema.

Though there’s no evident link between the artist and the villa’s architectural elements and interior design, the Marseillais are proud to tell her story as she was not only a unique type of woman for her time, but the one who turned the villa into a public asset.

In 1918, she bought the Italianate-style Villa Gaby, originally constructed in 1880, at an auction. She died from tuberculosis two years later. Before her passing, she left the villa to the city of Marseille with specific instructions for it to become a children’s hospital. Though that didn’t happen, the space has been used for medical conventions.

Marseille-based architect Raphaël Mougel worked on the restoration of the villa, whose French-style interior honors the charm of its previous owner.

For the 2015 renovation, the architect created a connection between the villa’s past and its present life by restoring and conserving historic elements and choosing modern furniture, lighting, and decoration. Each room in the villa, for example, has outlets by CJC Systems in the “LISA” design, which allow for modern electricity without getting in the way of the original architecture.

The elaborate stucco moldings, fine floors, ceiling mosaics, marble columns, and ornate woodwork establish the charm of the building. The richly decorated facade mirrors the detailing in the interiors.

There were previous renovation efforts that added new elements to the structure. “We removed recently added aspects from the walls and restored the walls to reveal their original features. We also took down the wooden doors that weren’t part of the original construction and fixed the doorway with curtains by Denantes,” said architect Raphaël Mougel in an interview for Radiant Life, while sitting on the sofa in the Traquandi lounge of the villa.

The lounge is named after artist Gérard Traquandi, whose work is known for marks and imprints. Mougel collaborated with him to create a piece of artwork that matched the interiors of the room.

“We’ve known each other since I was a kid. I’d say he’s a really important person in my life,” Mougel said.

The finished look is perhaps evidence of their longstanding friendship; through conversations with the architect, the artist created a piece that fit beautifully with the lounge’s design—notably, the mimosa yellow color and velvet material of the curtains.

Mougel retained certain marks of the modifications done over decades—the “ghosts” of old decor have been kept as raw as possible, fixed with simple varnishing.

While the majority of the villa restoration was completed rather swiftly, the facade was only finished in 2020. The facade has modern Geko 6.0 lighting by Luce set around the building’s perimeter.

The ongoing project should soon be completed once a few minor details are finished. In the meantime, the villa remains open to host medical events upon demand. It’s also available for private event bookings, allowing Marseillais the opportunity to enjoy the luxurious villa and be inspired by its interior and exterior beauty—not to mention the incredible views from the terrace.

In recent years, the MCO Congrès group has hosted concerts at the villa as part of the “Jazz of the Five Continents” event in support of local jazz artists.

It would certainly seem that the legacy of Gaby Deslys still remains intact.