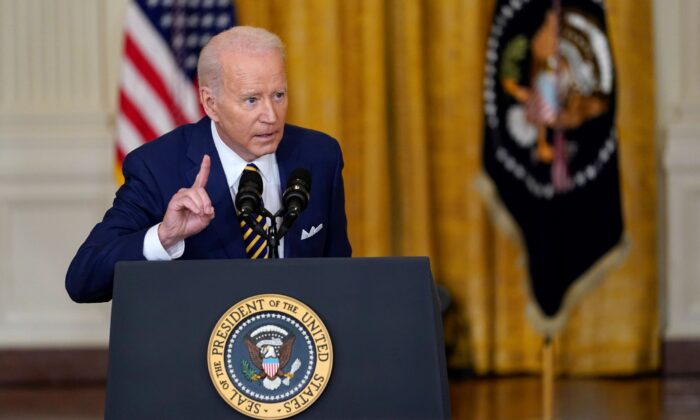 President Joe Biden speaks during a news conference in the East Room of the White House in Washington on Jan. 19, 2022. (Susan Walsh/AP Photo)
Business Columnists

A Scaled-Down ‘Build Back Better’ Would Wreck Neighborhood Child Care

One of the takeaways of President Joe Biden’s marathon press conference on Jan. 19 was his declaration that he was confident that the Democrats could “get pieces, big chunks, of the Build Back Better law signed into law.” One possible big chunk is some version of the bill’s $270 billion-plus new federal child care program.

The less-than-progressive Manchin and Sinema might be persuaded to get on board a possibly less expensive incarnation of the program in the 50–50 Senate whose tied votes are decided by Vice President Kamala Harris.

But if they do, they will upend the lives of millions of working parents by destroying thousands of existing modestly sized day care businesses and facilitating a needless Washington intrusion into the home life and daily work routine of ordinary Americans.

Though it’s seldom prominent in the public discourse, the federal government has, with bipartisan support, been funding child care, including care administered by religious institutions, since 1990 through the Child Care and Development Block Grant. As the Department of Health and Human Services describes it, the Child Care and Development Fund (CCDF) block grant “made $9.5 billion available to states, territories, and tribes in fiscal year 2021.” COVID relief added to that with “$10 billion in supplemental CCDF monies.” The American Rescue Plan Act then added “about $15 billion in supplemental discretionary CCDF monies and about $24 billion for child care stabilization grants.”

Under the program, parents are given child care certificates supporting individual families rather than particular child care systems, giving them a choice of what variety of child care their children will receive. Consequentially, the day care centers they use aren’t subject to the avalanche of federal regulations so often attached to money coming from Washington. The result is a diversity of competent private care providers.

As Frederick Hess, director of education policy studies at the American Enterprise Institute, warns, however, the federal child care program within the Build Back Better bill passed by the House of Representatives last year contained “rules that would cut faith-based providers out of the picture”—in an environment in which faith-based providers serve 53 percent of the working-parent households who use center-based care, according to a national poll by Bipartisan Policy Center conducted in December 2020. Those parents “cited trust as the leading factor for why they selected their child care program.”

According to Hess, under the Biden scheme, “even tiny neighborhood providers and those that operate in accord with a faith tradition would be subjected to a raft of new rules and complex reporting requirements—including costly renovations required to comply with the Americans with Disabilities Act, which many of these providers would be unable to afford.” It would mean “a rapid concentration of child care in a few larger, more impersonal, and less localized centers.”

And despite its hundreds of billions of dollars in new spending, funds earmarked for remodeling, renovation, or repair could not be used for “buildings or facilities that are primarily used for sectarian instruction or religious worship.” Hess is concerned that such a new program could “decimate the more trusted, local, and faith-based parts of the child-care ecosystem,” resulting in “a dramatically increased reliance on less personal, less local child-care options.”

Moreover, despite all these billions already being spent on child care by the federal government, only a fraction of those eligible get the help—a primary reason for this failure, not unexpectedly, being bureaucratic red tape. Naturally, child welfare advocacy groups argue that the solution is more taxpayer money. As the nonprofit Child Trends contends, “Federal policymakers should explore the likelihood that additional funding for CCDF would help more families get subsidies.”

One prominent left-leaning Washington think tank examined the problems and spent more than 100 pages providing self-evident recommendations that any successful business would have required from the start. “Look at paperwork required in both policy and practice for each transition to assess the overall paperwork burden,” was one tip.

Whatever does or doesn’t work in federal funding of child care, however, its very existence for so long begs a huge question: If there can be bipartisan support—and constitutional backing from the Supreme Court—for Washington funding religious-oriented businesses that care for young children, then why not the same when it comes to older children’s education? Even left-leaning Justice Stephen Breyer, in his concurrence in the 7–2 Trinity Lutheran decision in 2017, concedes that the First Amendment’s Establishment Clause doesn’t preclude a religious entity benefiting from “a general program designed to secure or to improve the health and safety of children.” Is education any less important to children’s lives?

If these anti-religious chains were removed, thousands of private schools and day care centers alike could be improving the lives and futures of low-income American children via federally provided school choice and vouchers, as they also provide employment to teachers, caregivers, and others.