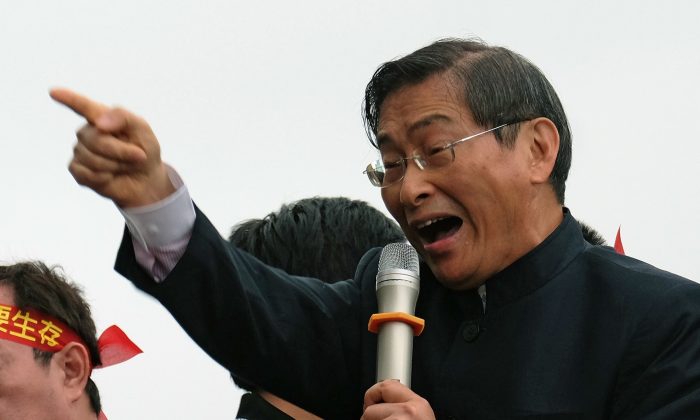 Chang An-lo, a pro-China activist also known as the 'White Wolf', gestures as he speaks during a demonstration to support the government and a controversial Taiwan-China trade pact in Taipei on April 1, 2014. (Sam Yeh/AFP/Getty Images)
China

A known criminal who goes by the name of “White Wolf” attempted to crash the party of Taiwanese students currently occupying the country’s legislature, but was met with jeering and song, rather than the violence that he and his comrades appeared to have come ready for.

Chang An-lo was born in China and came to Taiwan as a child; he fled the island to mainland China in 1996, after becoming wanted by the authorities for a range of gang-related crimes.

He did his best to provoke the peaceful protesters outside the Legislative Yuan on Tuesday, bringing a motley crew with him that played drums and shouted into a microphone.

“Go back home, students!” they yelled in Chinese. They threatened to break their way into the legislative compound and evict the students themselves, something that Taiwan’s police forces have so far refrained from doing.

Nastier words, not suited for a family newspaper, were also yelled by Chang, in the course of describing the Taiwanese students as “Chinese offspring.”

The confrontation on April 1 marked the second instance in which efforts to dislodge protesting students has taken a darker turn.

Thousands of young Taiwanese occupied the country’s legislative chambers on March 19, protesting a trade deal with mainland China. Many Taiwanese oppose the deal because they think that it would give communist China unprecedented and ultimately damaging access and influence over Taiwan’s economy.

Riot police used violence in the course of removing students from inside and around the Executive Yuan, the seat of the presidency, on March 23.

Commentators fear that Chang An-lo’s appearance on Tuesday was another indication that the Nationalist Party, presided over by President Ma Ying-jeou, is attempting to intimidate the protesters into giving in. The Ma government says that it is vital that the trade deal with China be passed.

Chang used to head the Bamboo Union triad, and is currently the leader of the China Unification Promotion Party.

J. Michael Cole, an analyst of the Taiwan scene, wrote that it appears that “Ma’s failure to deal with Chang, and the National Police Administration’s turning a blind eye to his nefarious activities, are the result of a decision to allow organized crime to do the administration’s dirty work.”

Taiwan is a democracy with a population of 23 million, established as the Republic of China by the Nationalist Party after it lost the Chinese civil war to the communists in 1949. While the last six years have seen a calming of public hostilities between the two countries, Taiwanese are increasingly alarmed by the attempts, by furtive economic means, to steer Taiwan’s course toward a de facto unification with China.

Judging by how events have transpired over the last couple of weeks, that prospect—at least inasmuch as it may be achieved peacefully—may be further away than ever.

A commotion erupted on Tuesday when one of Chang’s associates began beating a student protester while another man held the student’s head. A group of police came to separate them.

“You don’t deserve to be Chinese, China doesn’t want you!” a frustrated Chang yelled at the protesters at one stage.

This was greeted with raucous laughter, according to the Taipei Times. “We are not Chinese anyway,” they shouted back. “We are Taiwanese.”