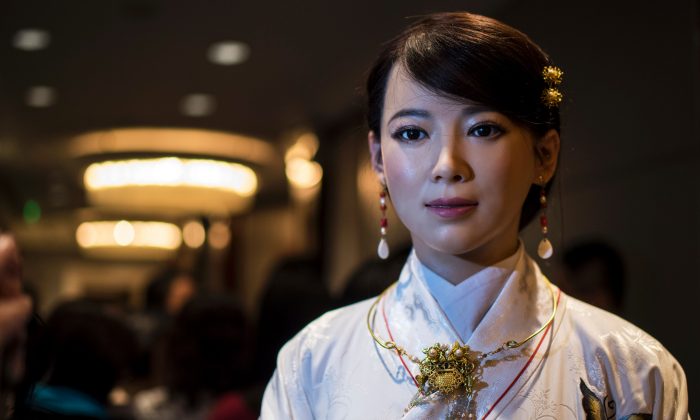 Humanoid robot Jia Jia, created by a team of engineers from the University of Science and Technology of China, is pictured following a presentation at a conference in Shanghai on Jan. 9, 2017. "Jia Jia" can hold a simple conversation and make specific facial expressions. (Johannes Eisele/AFP/Getty Images)
China

A Robot Wife: The Latest AI Development in China

China’s artificial intelligence (AI) researchers have created the world’s first “robot wife,” touting it as a solution to the severe gender imbalance within China’s population.

According to a report by Chinese media Sohu published on Nov. 5 last year, a group of top-notch Chinese engineers recently created the world’s first “AI wife.”  The news headline read, “a robot wife has been created, so you don’t need to marry a real wife in the future.” However, the report did not mention what institution or tech company may have created this invention.

The report described the robot wife as having unique facial features resembling a real human’s, with “skin” at a temperature close to that of a real human body. In addition, these AI “wives” can chat with humans and carry out household chores.

Clients can ask for customized orders for these robots, according to their specific requirements.

The report also claimed that in addition to being a sex robot, the AI “wife” can become someone’s real soulmate. “Now you can take a robot-AI wife home for just a little over 20,000 yuan [roughly $2,953]. There is no need to marry a real wife,” it said.

Li Yuanhua, a former associate professor of education at Capital Normal University in Beijing who now lives in Sydney, told the Chinese-language Epoch Times that the serious imbalance between men and women in China is caused by the Chinese regime’s forced implementation of the one-child policy.

According to China’s official statistics, there are currently 104.64 men to 100 women.

“Because of the imbalance of the male-to-female ratio, a large number of Chinese men cannot find a wife,” Li said.

China has a big bachelor problem. A 2012 report by the state-run People’s Daily estimated that there are nearly 12 million bachelors between the ages of 30 and 39, compared to about 6 million bachelorettes in the same age range. In other words, in that cohort, at least 6 million men are expected to remain unwed.

According to the Chinese Academy of Social Sciences, in 2020 there will be 24 million single men looking for a wife.

China observer Gu He suspected that the Chinese regime may have other purposes in mind with the development of a robot wife.

“If further developments of this product include espionage functions, such as eavesdropping and taking videos, the user will have a live monitor in the residence,” Gu told the Chinese-language Epoch Times in a Feb. 17 interview.

Gu also explained that the Chinese regime has issued new policies to aggressively develop AI technology, which are often tools to monitor the Chinese population.

Chinese netizens strongly disagreed with the idea of a robot wife.

“We human beings are created by God, we have flesh and soul. Robots are created by humans, and do not have souls!” one wrote. “The AI wife is the beginning of human destruction.”

Li Yuanhua believed that the emergence of this type of product is the result of moral degeneration.

“When human beings create a robot wife just to satisfy sexual desires, and when robots gradually replace human beings, the state of life bestowed by God will be destroyed and human beings will be on the verge of extinction,” he said.