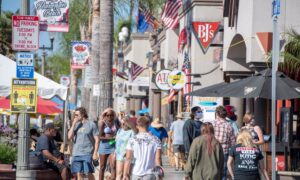 A Restaurateur’s Reflections of an Industry Battered by Pandemic Guidelines

As Orange County eateries begin reopening their doors for indoor dining, a Newport Beach restaurateur is reflecting on the “inhumane” treatment of the industry during the pandemic.

Newport Beach Councilman Noah Blöm said state-mandated closures have led restaurant owners to become disillusioned as “many people that weren’t ready to retire or would’ve never thought about selling their business” were forced to do so.

The owner of Costa Mesa’s Arc Food & Libations and Newport Beach’s Arc Butcher & Baker recalled how fellow business owners “went from having a busy restaurant to an empty restaurant.”

Blöm, who was elected into city council last November, said he was motivated to enter politics after witnessing how the state shutdowns were impacting his 16-year-old son, and those in the hospitality industry.

California’s restaurants were ordered shut last March after the World Health Organization declared the COVID-19 virus a pandemic, and the state entered its first lockdown.

Prior to the pandemic, Blöm recalled 2019 and the beginning of 2020 as being the most profitable years for the hospitality industry.

When it all came to a halt last spring, he closed his Costa Mesa restaurant and allocated the remaining staff to his Newport Beach location.

Ultimately, out of 75 employees, he kept one.

He recalled firing his chef of 10 years, and families of whom he employed husbands, wives, fathers, and sons.

“It’s one of the hardest decisions you make in your entire life,” he told California Insider. “In this business, you don’t build a team to let them all go on one day without any preconceived notion.”

Early last May, he reopened his Costa Mesa location as a test to see whether police would enforce the shutdown. Costa Mesa police did visit the restaurant, Blöm said, and were wonderful in showing their support discreetly.

Since then, Blöm has been operating both restaurants.

As a result of the support he received from government agencies, he said he has been able to rehire employees that feel comfortable with working in the industry. Although his kitchen team and bartenders agreed to return, a majority of his servers declined, leaving him to find new hires.

Restaurants were allowed to temporarily reopen after the initial round of restrictions was lifted late last May.

But the relaxed rules didn’t last.

Restaurants were most recently ordered shut again last November due to a surge of new COVID-19 cases and concerns the upcoming holidays would result in gatherings that could strain the health care system.

Blöm said he refused to cave in to all the state-mandated orders.

“It’s inhumane, we don’t do that, and that was the last straw,” he said. “I think for a lot of us is that I’m not firing my staff again, I’m not going through that. I’m not affecting families.”

Blöm said he considered his employees to be the most important part of his life.

“I spend 14 hours a day with most of them,” he said. “I’ve cooked side-by-side with every cook, I scrubbed floors and toilets together. You do the work together. They’re part of you, and to forsake them just because there’s fear is just not human.”

A Struggle to Survive

At the start of the pandemic, restaurant owners were only allowed to operate through take-out service. Blöm said that model alone was unsustainable for restaurants.

There’s a high cost associated for restaurants to be able to provide a quick-serve model, he said, and restaurants would have to purchase more to-go supplies.

Restaurants were met with more challenges once they were permitted to operate outdoors, Blöm said.

He said it wasn’t the money or strength of the restaurant industry that pushed this lawsuit, but rather the owners of the club that united to make money and create a lobby to invite other restaurants into the fight.