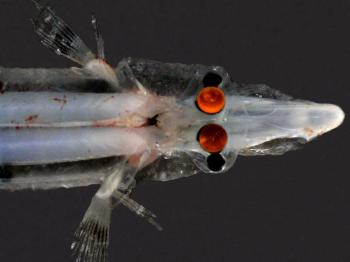 MIRROR TO THE SOUL: Researchers found Spookfish use mirrors in parts of its eyes. This view shows the fishâ��s upward pointing portion of the eye. The orange colour is from camera flash reflecting off theâ��mirrorâ�� inside the vertebrae's eyes' (Tamara Frank /Florida Atlantic University)
Science

A research expedition has captured the first vertebrae that uses mirrors to focus light instead of lenses. The spookfish, Dolichopteryx longipes, was found at a depth of 700m in the Tonga Trench, off Samoa.

“What makes this animal so unusual is that each eye is divided into two parts, one pointing upwards and one pointing downwards, making it look like it has four eyes,” said Dr Tamara Frank, Florida Atlantic University researcher.

Using its diverticular eye, the upper part contains a lens responsible for collecting the low levels of sunlight that penetrate down from the ocean’s surface. In the lower part, a mirror containing a stacked layer of crystals, reflects upwelling light to focus it into an image. These stacks are arranged at slightly different angles providing a well-focused and relatively high-contrast image.

Other fish with similar eyes that occupy the same depth of ocean with a dim background light field and a diverticular eye do not have this capability. They have a lens in their upper eye but no lens in the lower part due to attenuation. As there is no lens, a blurred image results.

However, in the spookfish, light entering the lower part of their eye hits a mirror positioned in front of the retina to focus this light and produce a much brighter image without using a lens, which allows it to steer clear of predators and detect bioluminescence from other animals. It also allows the fish to see underneath its body.

The spookfish occupies an ocean depth between 700–2400m. Previous attempts at a live capture failed to overcome the pressure differences resulting in mangled specimens. This expedition, led by Dr Hans-Joachim Wagner from Tübingen University used a special temperature-insulated collecting vessel that could be operated at high pressure beneath the ocean.